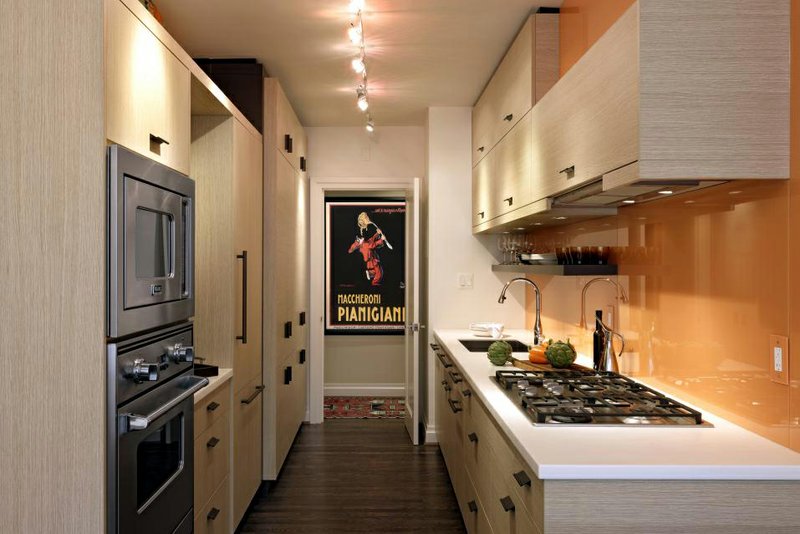 When best-selling cookbook author Jenny Rosenstrach renovated her kitchen, she figured she would squeeze in as much storage space as possible. But over time, she found she had filled all the cabinets and shelves with useless things.

Last year, she decided to rip out about 20 percent of her cabinets to not only open the space up, but also simplify; she purged useless gear and tools. Now, she says: "It's so much better. I gave away three cabinets' worth of small appliances, bowls and mugs, and I have not once said to myself, 'Oh, I wish I had that back.' "

Turns out Rosenstrach is not alone. Recent research from the National Kitchen & Bath Association shows there is movement away from large cabinet-filled kitchens with appliances laid out in a triangular configuration to smaller galley or in-line kitchens, called such because the entire kitchen is laid out in one straight line.

Kitchen designer Jennifer Gilmer of Jennifer Gilmer Kitchen & Bath, based in Maryland and Virginia, finds that 85 percent of new homeowners are choosing the cleaner, more contemporary and simple style of a galley kitchen. "People may have grown up in oversized houses with kitchens that were too large and poorly designed, so as a reaction they want smaller, more compact spaces," Gilmer says.

She makes a good case for galley kitchens: They allow you to work without the obstruction of an island or table. They also keep the work area smaller, which means less walking from one appliance to another or to the sink. And galleys are great for smaller homes or apartments because they take up less room than an eat-in kitchen.

Dan McFadden, president of PB Kitchen Design in Geneva, Ill., and president of the Chicago Midwest chapter of the National Kitchen & Bath Association, says another benefit of galley kitchens is that they cost less: "You'll have fewer cabinets and fewer feet of countertop, so you can splurge on appliances, fixtures and hardware." McFadden likes to use sleek built-in appliances with clutter-free controls such as Sub-Zero's integrated refrigerators that sit flush with adjacent cabinets. For particularly small urban spaces, he suggests splurging on the Sub Zero 24-inch integrated column refrigerator/freezer. The super-slim unit has one door that conceals the refrigerator and freezer; no horizontal lines means it blends into the rest of the kitchen design.

For a typical galley layout, McFadden suggests putting the refrigerator on one end, a pantry (if there is one) and wall ovens on the other end, with the sink and cooktop centered in the middle on opposite walls. If the kitchen is wide enough, he recommends putting the cooktop directly across from the sink. But if the space is too narrow, he suggests staggering them so that two people in the kitchen won't bump into each other.

Countertop space is critical in any kitchen, but especially in a galley. Elle H-Millard, industry relations manager for the NKBA, suggests thinking in terms of zones: "When you walk into the kitchen with bags of groceries, you need a landing zone. When you put the groceries away, you need an uploading zone. For dicing and chopping, you need a prep zone, and for cooking, a cooking zone."

To best create these zones in a galley kitchen, she agrees that the refrigerator should be at one end so the countertop space ends up in the middle, punctuated by the sink on one side and the range on the other. If counter space is limited, H-Millard says to opt for a range rather than a cooktop with wall ovens and consider refrigerator and freezer drawers instead of a traditional column design. And as any galley/small kitchen owner will tell you, make sure you have a large cutting board that lies over the top of your sink. That way you automatically gain, at the very least, a couple of feet of counter space.

Mayhew, a Today show style expert and former magazine editor, is the author of Flip! for Decorating.