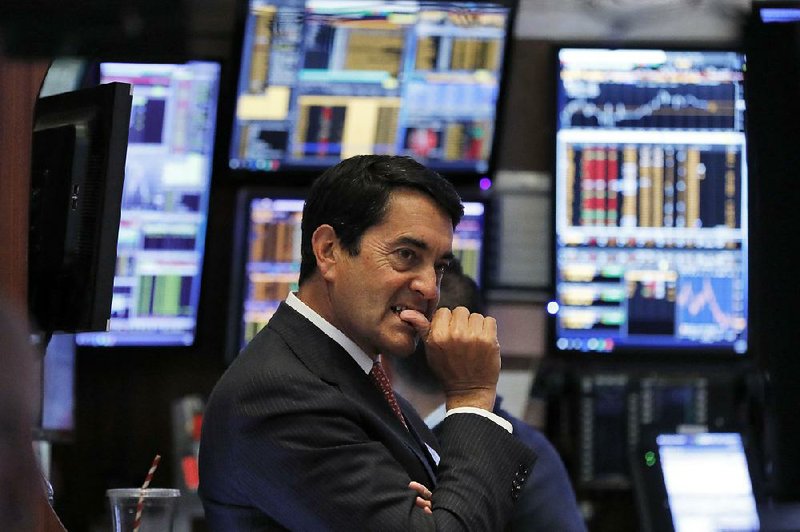 Trader Mark Muller watches Thursday on the floor of the New York Stock Exchange as stocks plummet amid fears that chances for a recession are larger than experts previously thought.

U.S. stocks sank Thursday after a factory gauge dropped the most in a decade and Apple cut its sales outlook, adding to concern that global growth is slowing. Treasury notes rallied and the yen strengthened.

The S&P 500 index tumbled 2.5 percent for the steepest sell-off since Christmas Eve, when the gauge fell within a few points of a bear market before embarking on a 6.8 percent rally over the next five sessions. The Dow Jones industrial average plunged 660 points, or 2.8 percent.

"Corporate America is getting cold feet about the outlook," said Chris Rupkey, the chief financial economist at MUFG Union Bank in New York. "That's what the stock market is saying with new selling and new lows after the manufacturing survey's release."

U.S. government bond prices surged, sending yields to their lowest level in almost a year, and gold and high-dividend stocks like utilities also rose as investors looked for safer places to put their money.

"On days like today people say, 'Crud, I've got to buy tons of bonds,'" said Jim Vogel, a fixed-income strategist at FTN Financial. "That's driven by a large change in sentiment."

The U.S. stock market in 2018 posted its worst year in a decade.

Among big industrial companies that could suffer from a drop in demand from China, Caterpillar declined 3.9 percent, Deere 2.7 percent and Boeing 4 percent.

The weak Institute for Supply Management factory reading adds to anxiety spurred by poor data from China and Europe a day earlier, stoking fear that a recession looms larger than previously thought. Apple and Delta join a growing list of companies warning that the trade war and political turmoil may be weighing on corporate profits.

The institute said its index of U.S. manufacturing fell to its lowest level in two years, and new orders have fallen sharply since November. Manufacturing is still growing, but at a slower pace than it has recently.

"Trade disputes are seeping into the real economy globally," said Brett Ryan, senior U.S. economist for Deutsche Bank Securities. "The policy uncertainty will eventually cause a slowdown, and you're finally at that point now."

Apple stock plummeted 10 percent Thursday, wiping out more than $74 billion of the company's market value. That's almost as much as Starbucks is worth and more than Lockheed Martin, Lowe's, Caterpillar, General Electric or Morgan Stanley.

Apple plunged the most since 2013 after citing an unforeseen slowdown in China for its woes. Ten-year Treasury yields sank to an 11-month low. Bristol-Myers Squibb's bid to buy Celgene and a strong reading on private hiring for December were shrugged off by bearish investors.

Apple's stock has slumped 39 percent since early October. The company also recently announced that it would stop disclosing how many iPhones it sold each quarter, a move many investors suspected was an attempt to hide bad news.

In a letter to shareholders Wednesday, Apple CEO Tim Cook said iPhone demand is waning in China and that the company expects revenue of $84 billion for the quarter that just ended. That's $7 billion less than analysts expected.

Cook's comments echoed the concerns that have pushed investors to flee stocks over the past three months.

"For a while now there's been an adage in the markets that as long as Apple was doing fine, everyone else would be OK," said Neil Wilson, chief markets analyst at Markets.com. "Therefore, Apple's rare profit warning is a red flag for market watchers. The question is to what extent this is more Apple-specific."

Over the past year, the U.S. and China imposed new tariffs on hundreds of billions of dollars' worth of imports in a trade war that threatens to snarl multinational companies' supply lines and reduce demand for their products. Companies such as General Motors, Caterpillar and Daimler have all said recently that trade tensions and slower growth in China are damaging their businesses.

"When the largest and second-largest economies in the world get into a trade dispute, the rest of the world's going to feel the effects. That's what we're seeing now," said Jack Ablin, chief investment officer of Cresset Wealth Advisors.

"This situation is yet another example of how politics -- in this case, the trade war -- has exacerbated real but manageable economic concerns and turned them into something worse than they have to be," Brad McMillan, chief investment officer for Commonwealth Financial Network, wrote in a note to clients.

Important indicators still show the U.S. economy is growing at a decent clip. A measure of employment in the private sector in December, released Thursday, was higher than expected. And analysts estimated that employers added about 180,000 jobs in December ahead of the Labor Department's monthly jobs release today.

Still, companies and consumers are facing challenges that could make them more cautious about spending money. If they pull back, the economy will suffer. Apple's warning provides strong evidence that the trade tensions with China are taking a toll. And if more indicators show the American economy stumbling, investors will become more convinced that the Federal Reserve's recent interest rate increases are dampening activity.

In the coming weeks, scores of companies will report their fourth-quarter results.

Kevin Hassett, the chairman of the White House Council of Economic Advisers, on Thursday said many U.S. companies were likely to post disappointing sales figures until the United States strikes a trade deal with China. "It's not going to be just Apple," Hassett told CNN. "There are a heck of a lot of U.S. companies that have a lot of sales in China that are basically going to be watching their earnings be downgraded next year until we get a deal with China."

Information for this article was contributed by Vildana Hajric and Reade Pickert of Bloomberg News; by Marley Jay of The Associated Press; and by Peter Eavis and Binyamin Appelbaum of The New York Times. 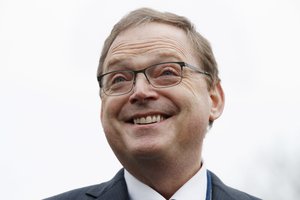 Photo by AP/JACQUELYN MARTIN
Kevin Hassett, chairman of the White House Council of Economic Advisers, speaks to reporters, Thursday Jan. 3, 2019, outside the White House in Washington.