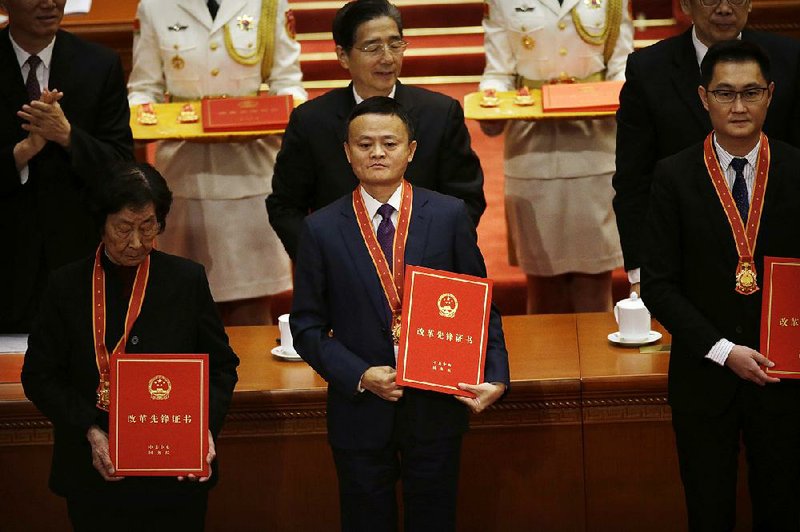 BANGKOK -- Stock market volatility in 2018 obliterated almost $1 trillion from the fortunes of the world's richest individuals, according to a list by the wealth compiler Hurun Report.

The report, China's version of the Forbes rich list, showed that Chinese billionaires still outnumbered those from any other country as of Jan. 31, at 658. Several newly minted ones amassed wealth through big share offerings, while 212 Chinese tycoons lost their billionaire status.

The biggest gains in wealth last year came in the areas of technology, media and telecommunications, followed by real estate and other investments, manufacturing and retailing.

The wealthiest in China was e-commerce giant Alibaba's founder Jack Ma, the world's 22nd-most-wealthy person, with $39 billion. Pony Ma Huateng of the Internet giant Tencent Holdings, with $38 billion, and Xu Jiayin of property developer Evergrande, with $37 billion, were close behind.

Though people in China and other Asian nations are steadily gaining in wealth, Amazon founder Jeff Bezos topped the global chart for the second year running, with wealth estimated by the Hurun rich list at $147 billion. Bill Gates ranked second, with $96 billion, and Warren Buffett was third, with $88 billion.

The only Asian among the 10 richest people in the world was Mukesh Ambani of Indian conglomerate Reliance Industries, who ranked No. 8 with wealth estimated at $54 billion.

"Poor stock market performances and an appreciating dollar were the main reasons for this year's record drop in billionaires," Hoogewerf said in a statement. "Despite the strong dollar and its tax cuts, the USA added only 13 billionaires, but made it harder for the rest of the world to make the cut."

Overall, the report said, there were 2,470 billionaires in the world, down 224 from last year. Their total overall wealth fell by $950 billion from the year before, to $9.6 trillion, because of stock market gyrations and a strong U.S. dollar, it said.

Hoogewerf said he believes that the world's billionaires may number more than 6,000 people, since many seek to hide the extent of their wealth, especially in the Middle East. Forty billionaires from last year's list died in 2018.

Hurun issued the list jointly with Chinese luxury real estate developer Loong Palace, which markets villas and other properties to the wealthy.

While the apex of the world's wealthiest remains in the U.S. and Europe, such lists show the evolving landscape of economic power.

Last year's market volatility took the biggest toll on Japan, where the Tokyo Stock Exchange lost 43 percent of its value in market capitalization. But the fallout was most evident in China, where markets turned in their worst performance in four years, tumbling 25 percent. The nation's currency also weakened. The slowdown comes on the heels of years of explosive economic growth.

According to the list, the company that created the most billionaires was Thailand's CP Group, a conglomerate with operations spanning agriculture, telecommunications, retailing and finance, which had 17 as of the end of January.

Next in line was Red Bull, with a dozen: Austrian Dietrich Mateschitz and the 11 children of the company's co-founder, Chaleo Yoovidhya.

Thanks to such big family fortunes, the Thai capital, Bangkok, ranked eighth in the number of resident billionaires.

Information for this article was contributed by Elaine Kurtenbach of The Associated Press and by Taylor Telford of The Washington Post.