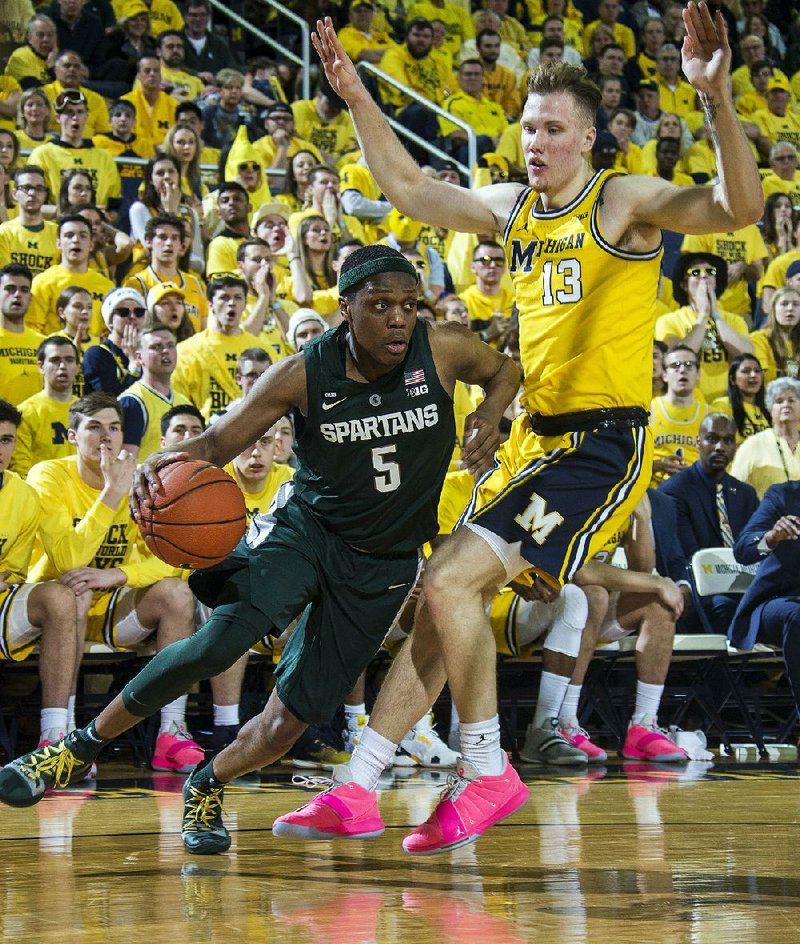 ANN ARBOR, Mich. -- Cassius Winston had 27 points and eight assists, and No. 10 Michigan State moved into sole possession of first place in the Big Ten with a 77-70 victory over No. 7 Michigan on Sunday.

Kenny Goins had 16 points and 11 rebounds, and Xavier Tillman added 14 points for the Spartans, who snapped Michigan's 22-game winning streak at Crisler Center despite being without two of their top three scorers.

Joshua Langford is out for the season and Nick Ward is recovering from a broken hand, but Goins and Tillman produced in Ward's absence for Michigan State.

CINCINNATI -- Naji Marshall scored 17 points and Xavier used a big surge in the second half to rally past No. 17 Villanova, leaving the Wildcats with three consecutive losses in Big East play.

Phil Booth had 12 points in the first half, when the Wildcats led by as many as nine points. Their 30-27 halftime lead ended a streak of three consecutive halves allowing at least 40 points. Booth made only one of his eight shots in the second half and finished with 14 points.

The Musketeers (15-13, 7-8) won their fourth consecutive -- matching their season high -- and ended their run of lopsided losses against the Wildcats. Villanova (20-8, 11-4) had won five in a row against the Musketeers.

Christyn Williams (Central Arkansas Christian) had 12 points and was 1 of 6 on three-pointers for the Huskies.

With associate head coach Chris Dailey filling in for Auriemma, who is ill, UConn remained undefeated in six seasons in the American Athletic Conference.

UConn is 99-0 in American Athletic Conference regular-season games and 114-0 overall since joining before the 2013-14 season.

In other Top 25 women's games Sunday, Sabrina Ionescu recorded her NCAA-record 17th triple-double, Erin Boley had a career-high 32 points and No. 2 Oregon snapped a two-game losing streak by racing past Southern California 96-78. ... Asia Durr scored 23 points to lead No. 4 Louisville past Boston College 87-51. ... Teaira McCowan scored 23 points, Anriel Howard and Andra Espinoza-Hunter both added 20, and No. 6 Mississippi State beat Vanderbilt 86-70. ... Senior Alanna Smith scored 14 points, Kiana Williams scored 15 points, and No. 7 Stanford pulled away in the second half to beat No. 17 Arizona State 71-50. ... Kiara Leslie scored 21 points and made the go-ahead jumper with 37.7 seconds remaining to help No. 9 North Carolina State beat rival North Carolina 74-69. ... Natisha Hiedeman and Allazia Blockton had double-doubles as No. 11 Marquette rolled over Xavier 79-53. ... Aleah Goodman scored 11 of 21 points in the fourth quarter and No. 12 Oregon State turned back UCLA 75-72. ... Bianca Cuevas-Moore scored a career-high 28 points as No. 13 South Carolina handled rival Tennessee 82-67. ... Mykea Gray had eight of her 19 points in the fourth quarter, including a clutch jumper with 1½ minutes left followed by a big steal, and No. 14 Miami beat No. 22 Florida State 64-54. ... Taylor Murray scored 18 points and No. 16 Kentucky held on to beat LSU 57-52. ... Macy Miller scored 28 points and Tagyn Larson had 21 points and 11 rebounds to help South Dakota State stun No. 23 South Dakota 82-78 in overtime. ... Becca Hittner scored 33 points, Sara Rhine added 21 points and 10 rebounds and No. 24 Drake rolled past Indiana State 96-77.