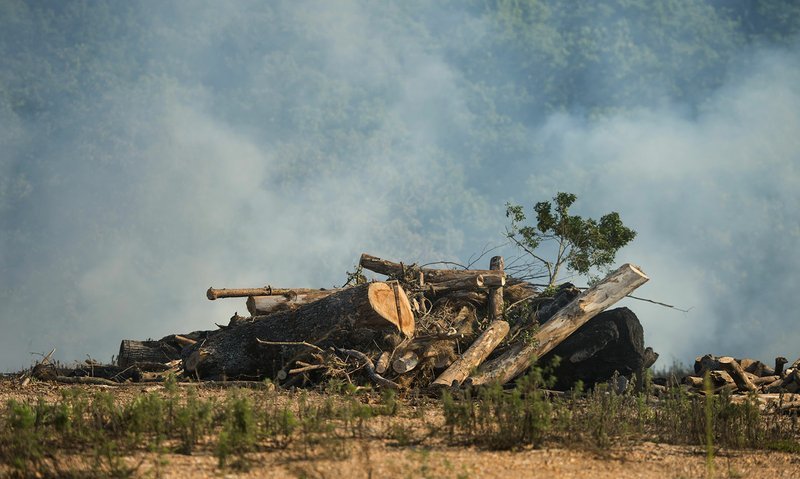 BENTONVILLE -- There is little that Benton County can do to help extinguish an underground fire at a stump dump in Bella Vista, County Judge Barry Moehring said last week.

Earlier this month, at a Bella Vista town-hall-style meeting to discuss a March 12 sales tax election for a new courthouse in Bentonville, two residents asked Moehring why the county wasn't doing anything to help the city deal with the fire.

"We don't have a fire department," Moehring told the county Quorum Court at a meeting Tuesday night. "We can't put out fires. We don't have the capacity to put out the fire and deal with the remediation.

"It's a unique situation. It's in a city. It's not in our jurisdiction. They are asking for relief anywhere they can. It's a terrible situation. A lot of residents are frustrated and angry. I understand that," he said.

Firefighters discovered the fire July 29, and it has been burning ever since. Fire Department personnel have said the blaze may be more than 50 or 60 feet underground.

In December, after an unhealthy air quality reading in the area, residents near the fire were urged to avoid prolonged or heavy exertion outdoors. The state continues that caution for people living within a half-mile radius of the blaze, although recent testing has shown air quality results in the "good" range.

Officials with the Arkansas Department of Environmental Quality and EnSafe, the Memphis-based company hired by the state to help put out the fire, did discuss with the county building an access road at the site, Moehring said.

The access road is part of the site work that has to be finished before the fire can be extinguished.

EnSafe provided Frasier and Beam with road specifications, and the cost estimate was $300,000, Moehring said.

The county maintains more than 1,600 miles of roadway, about half of it paved. The Road Department's goal is for about 54 miles of paved road improvements in 2019, according to a plan presented to the Quorum Court's Finance Committee in October.

"Given the amount of dollars involved, and the subsequent impact on our road plan for 2019, I felt obligated to bring this project to the Quorum Court for approval, or at least acknowledgement, before proceeding," Moehring said of the EnSafe estimate.

"And before doing that, I knew one of the questions I would be asked was whether or not the county would be reimbursed for all or part of this project. I've had a few different conversations with ADEQ about this possibility," he said.

However, Moehring said he was told Wednesday morning that the state is now considering a different access road that will not require assistance from the county.

"We are prepared to assist if there is a role for us to play," Moehring said.

Firefighters were dispatched July 29 to an area on Trafalgar Road, where they spotted smoke and what appeared to be the remains of a brush fire, said Steve Sims, Bella Vista fire chief.

Tom Judson, the Bella Vista Property Owners Association's chief operating officer, said the association operated the dump for wood and yard waste on leased land from December 2003 to 2016, after which the site was covered with soil.

Nobody monitored the site the last few years it was open, but staff members removed trash when possible, Judson said.

The cost to put out the fire and clean up the site could be between $21 million and $39 million, Gov. Asa Hutchinson has said.

Federal assistance is necessary because the state has only $7.9 million available in its response fund, said Donnally Davis, an official with the state Department of Environmental Quality.

State officials met with Hutchinson on Feb. 15 to discuss the status of the site and the next course of action, according to a news release from the Environmental Quality Department. The agency plans to seek a supplemental appropriation bill to get authority to contract to address the situation. That is another step toward financing the work, the release stated.

Site preparation will be underway for the next few weeks, the release said. That work includes clearing trees and other vegetation to create a staging area around the site, and building an access road and a support system to facilitate fire control and fire response, the release said.

The support system could include building water-collection sites, berms, weirs and a sheet pile containment area. A water-supply line has already been installed, Davis said.

The dump was closed Dec. 31, 2016, according to Bella Vista's website. The property is now owned by Brown's Tree Care.