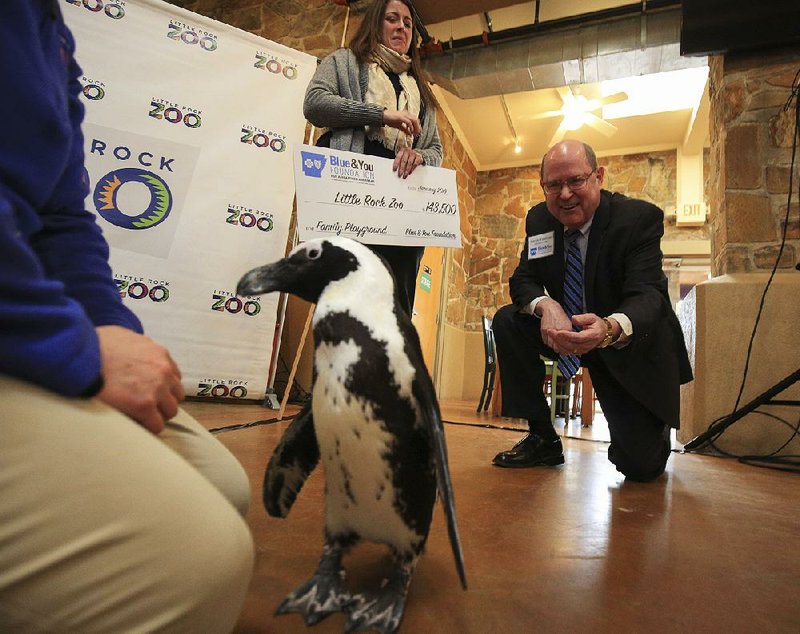 Blue & You Executive Director Patrick O’Sullivan (right) tries to make friends Tuesday with Taz, an African Black-footed Penguin, after presenting Little Rock Zoo Director Susan Altrui with a check for the construction of a new Nature Play Area at the zoo. The new Nature Play Area will be located next to the Penguin Pointe habitat near the zoo’s front entry.

The Little Rock Zoo will soon break ground on a play area that aims to help kids understand nature in a new way.

The area will feature interactive activities for children such as an oversize eagle's nest and other climb-and-explore structures inspired by the natural world. Construction will begin in the next month, and the feature is scheduled to open in the next year, officials announced Tuesday. It will be next to the penguin habitat.

"It mimics things you would see in nature on a little bit of a grander scale," Altrui said.

Patrick O'Sullivan, the foundation's executive director, said the zoo is one of Arkansas' most attended attractions and serves as a natural way for people to go out and get exercise. He said the new feature would be an unconventional, "Tom Sawyer and Huck Finn" style playground, with sticks and logs to climb on and build with.

The foundation also provided $144,000 in grant funding last year for the zoo's sensory garden, which will open in March. That playground is across the road from Cafe Africa. It will feature a more traditional playground equipped with musical instruments and fragrant plants.

Altrui said those grants are among the largest the zoo has ever received.

Mayor Frank Scott Jr. said the zoo is vital to the quality of life in the city.

"A key of keeping someone here in the city is quality of life," he said.