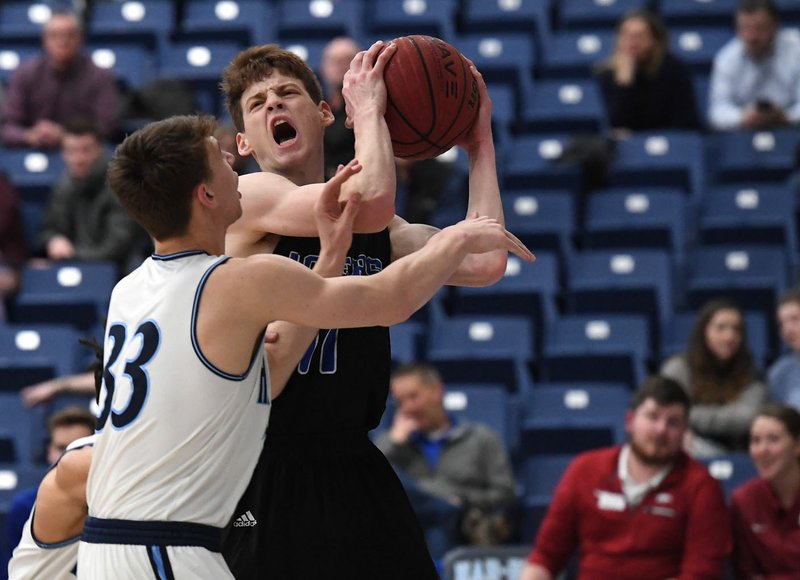 Rogers blitzed Har-Ber with six 3-pointers in the first quarter and defeated the Wildcats 76-59 Tuesday at Wildcat Arena.

The Mounties' 10 3-pointers were quite an improvement from last week when they continually misfired during a 67-46 loss to Bentonville.

Five players hit 3-pointers in the first quarter for Rogers on Tuesday and most of them came in front of an active student section that made the trip to support the Mounties.

"That's very unusual for us, especially when we were 7 for 25 (on 3-pointers) the game before," Rogers coach Lamont Frazier said. "Our guys took good shots, the way we practice."

Rogers' accuracy from long-range extended the Har-Ber defense to the perimeter and enabled the Mounties to go inside for baskets in the second quarter. Rogers then combined inside and outside scoring to increase its lead to 44-26 early in the third quarter. Will Voigt hit a floater and a 3-pointer to prompt a Har-Ber timeout that only briefly slowed the Mounties.

Elliot Pascal scored 20 points to lead Rogers, which began the night in third place in the 6A-West Conference.

Lawson Jenkins finished with 22 points despite picking up his third foul late in the first half. Cole Bishop added 13 for the Wildcats, who began the night in fourth place in the 6A-West. Har-Ber (10-13, 6-7) ends the regular season at Fayetteville while Rogers (19-6, 9-4) hosts Rogers Heritage on Friday.

Tuesday's game was a rematch from Jan. 22, when Rogers held Har-Ber to one field goal in the fourth quarter of a 57-44 victory over the Wildcats. Har-Ber's scoring slowed in the third quarter on Tuesday when the Wildcats were outscored 16-10.

Bentonville erased a one-point halftime deficit with a 13-2 run in the third quarter as the Tigers defeated a short-handed Springdale team in Tiger Arena.

Springdale (5-11, 11-18) was missing four of its top seven players, all of whom were suspended for one game following Friday's altercation at the end of the game against Fayetteville. The Red'Dogs, however, led 20-19 at halftime after Vincent Mason's bucket with 35 seconds remaining.

Bentonville (20-6, 10-3) then opened the second half with nine straight points and took a 28-20 lead on Connor Deffebaugh's two free throws with 2:38 left in the third quarter. The Tigers led 32-22 at halftime and 42-28 with 3:26 remaining after Michael Shanks hit three straight buckets before Springdale made things interesting near the end.

"We wanted to compete," Springdale coach Jeremy Price said. "If we're getting on the bus, we're putting on the jersey and trying to win a basketball game.

"The kids that played did an excellent job. We wanted to play team ball; we wanted our offense to help our defense. We wanted to be patient, and for the most part we did that. There were a couple of stretches where we didn't, and that's when the game got gapped."

Shanks had 13 points and Deffebaugh 12 for Bentonville, which clinched the conference's No. 2 seed and a first-round bye in the Class 6A state tournament next week at Bentonville West. Mason had 17 points for Springdale, whose loss forces a three-way tie with Rogers Heritage and West for fifth place with one game remaining.

The Purple Bulldogs were missing four starters and had only eight varsity players suited up Tuesday night at War Eagle Arena, but they came up with a big fourth quarter to earn the win and a share of the 6A-West Conference title.

Anton Micha's 3-pointer at the third-quarter buzzer game Fayetteville (20-5, 11-2 6A-West) the lead for good and started a 13-0 Purple'Dogs run that gave them control of the game.

Fayetteville clinched the No. 1 seed from the 6A-West and at least a share of the conference title with the win.

Heritage (10-15, 5-8) looked to have momentum when Logan Clines got a steal and layup for a 26-26 tie with less than 30 seconds left in the third quarter. But Michna hit from the corner for the 29-26 lead to give Fayetteville the momentum heading into the fourth quarter.

Alex Kinsey picked right up with a driving layup and a 3-pointer and fellow senior Darius Bowers followed suit with 11 straight points to put the game away.

Fayetteville coach Kyle Adams couldn't have been more pleased with the way his team responded.

"I was just proud of our defense for four quarters," Adams said. "Those kids responded the way I hoped they would. And not just them, I was impressed with our kids behind the bench that normally play that weren't in the ballgame. They were engaged from the get-go.

"I thought Alex Kinsey, he's coming off an ACL tear. Not even the points, just the leadership He worked his tail off to get back to where he could even get dressed and participate and then he steps up and makes some big shots for us, especially early. Then Darius late in the game making free throws."

Kinsey finished with a game-high 19 points, while Bowers added 13 and Michna 11 for Fayetteville. Ernie Rodriguez and Clines led Heritage with nine points each.

Senior Dawson Bailey poured in a game-high 22 points Tuesday night, including 16 in the second half, to lead Bentonville West to a 6A West Conference win and kept its post-season hopes alive heading into the final game of the regular season.

"We started out a little slow offensively -- the shots weren't going in, but then we were able to turn it around by playing good defense," Bailey said. "The shots started falling and my teammates kept getting me the ball, so I shot it. But it was team effort all the way around."

After an offensive-challenged first quarter ended in a 4-4 tie, the teams continued to trade buckets until late in the second quarter. After a pair of free throws from Van Buren's Ethan Moore knotted the score at 14-14 with 3:30 left in the half, West finished on a 7-0 run.

Bailey opened the second half with a three to make it a 10-point West lead. The Wolverines stretched the lead late in the third with a putback from Traven Hardiman and a pair of layups by Bailey to go up 39-24.

"We knew Van Buren was going to present a tough matchup for us, because they are always so well-coached," West coach Greg White said. "We literally had to draw something up at halftime and make some adjustments and get our offense going. Credit to my assistant coaches. That's the kind of guys I have on my staff." 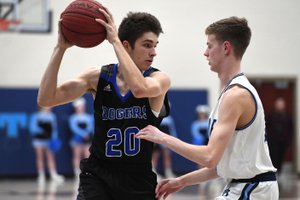