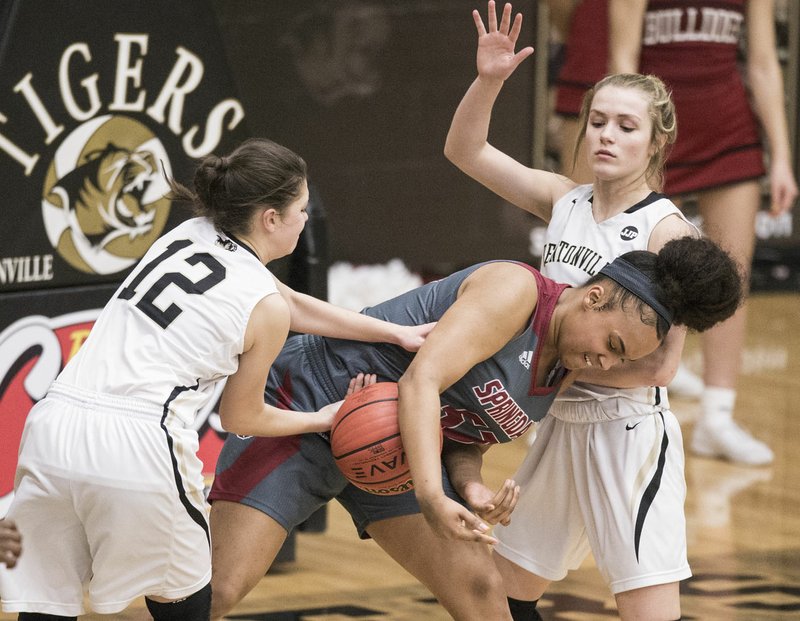 BENTONVILLE -- Four minutes into their final home game of the season, and Bentonville's girls had only a single point to show for it.

That didn't last long much longer. The Lady Tigers scored the next 15 points to close out the first quarter and went on to enjoy a 64-33 victory over Springdale High during 6A-West Conference action in Tiger Arena.

The win allows Bentonville (23-3, 12-1) to clinch the league's top seed for the Class 6A state tournament next week at Bentonville West and a share of the conference title. The Lady Tigers can win the outright 6A-West title with a win Friday at West.

"We kinda came out slow, a little tight," Bentonville coach Tom Halbmaier said. "But I was overall pleased with the defensive effort and our ability to get stops. That just helped us out as we started hitting shots and gave us some breathing room."

Defense led to Bentonville's first bucket as Natalie Smith stole the ball and drove for a layup, and it ignited the offense. Emily Sanders, who led the Lady Tigers with 12 points, hit a pair of 3-pointers, and Avery Hughes made it a 14-1 game with her three-point play with a minute left in the first quarter.

Bella Irlenborn continued Bentonville's run when she started the second quarter with a bucket before Marquesha Davis hit Springdale's first bucket with 7:05 before halftime. The Lady Tigers, however, kept pouring on the offense and went on to post a 36-11 halftime lead and stretched it to a 51-15 margin after three quarters.

"I was really proud of the seniors," Halbmaier said. "They came out and delivered. They played hard and hit the shots that we needed to hit.

"The group of kids we've got, they are streaky. They can put points up in a hurry, and they do a great job of moving the ball around and trying to find the open player. This was Emily Sanders' night of hitting the 3-ball, and that helps when your point guard is shooting well and opens things for everybody else."

Courtney Storey scored 15 of her 17 points to lead the Lady Mounties.

The game was a rematch from Jan. 22, when Kate McConnell scored 23 points to lead Rogers to a 55-32 victory over Har-Ber. But it was Storey who had the hot hand on Tuesday for the Lady Mounties, who built leads of 11-2 and 30-17 in the first half. Storey made three consecutive 3-point goals to give Rogers its first double-digit lead, 22-12, halfway through the second quarter.

"We're a defense-first program," Rogers coach Preston Early said. "We stayed disciplined and kept them in front of us. We played their screens well and made it tough on them. If you're hard to score on, you're going to be hard to beat."

Caylan Koons scored 13 points for Har-Ber, which got to within four points in the third quarter before Rogers pulled away again.

Standout Sasha Goforth didn't score her first points until a minute was gone in the third quarter, but Fayetteville didn't miss a beat.

The Lady Purple Bulldogs (18-4, 11-2) used a balanced scoring attack to cruise past Rogers Heritage (5-20, 1-12) on Tuesday at War Eagle Arena. Fayetteville will be the No. 2 seed from the 6A-West in next week's state tournament.

Fayetteville turned up the defensive pressure and pulled away to a 38-13 halftime lead. Claudia Bridges was the only player in double figures in the game with 11. Coriah Beck and Ariana Saitta added nine points each. Goforth finished with just five.

Fayetteville coach Vic Rimmer was pleased with his team's intensity.

"I thought we played pretty hard tonight," Rimmer said. "Honestly, the last couple weeks we haven't played hard all the time. I thought our energy level was good, our bench was good.

"We shot the ball OK. Defensively, we've still got some things we've got to get better at. Overall, just grit, toughness and work ethic was good tonight."

Senior Rylee Ryan and junior Lexi Miller made four 3-pointers each Tuesday night to pace the hot-shooting Pointers to their fourth straight 6A West Conference victory.

Kannady, only a freshman, added three triples to the barrage, giving Van Buren 11 total makes from beyond the arch.

The Pointers (14-12, 7-6) began to loosen up a tight game midway through the first quarter, getting a layup from Emmalee Grebe and a three from Kannady to take a 12-6 lead. Two more threes from Ryan put Van Buren up 18-13 at the end of the first.

"(Bentonville West) shot the ball well to start the game and was effective getting the ball in the paint, which was causing us some problems," Bryant said. "But midway through that first quarter, our kids got focused defensively and made a commitment to keep the ball out of the paint."

The Pointers finished the half on an 18-4 run, getting consecutive layups from Olivia Schnakenberg late in the second quarter to extend the halftime lead to 43-24.

Miller, who finished with a game-high 17 points, hit three triples in the third quarter, including a long-rage bomb at the buzzer to put the Pointers up 57-30.

Ryan added 12 for Van Buren, with Kannady chipping in 11. 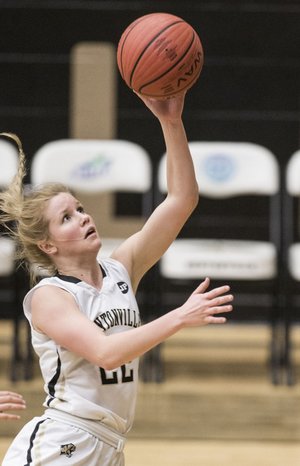