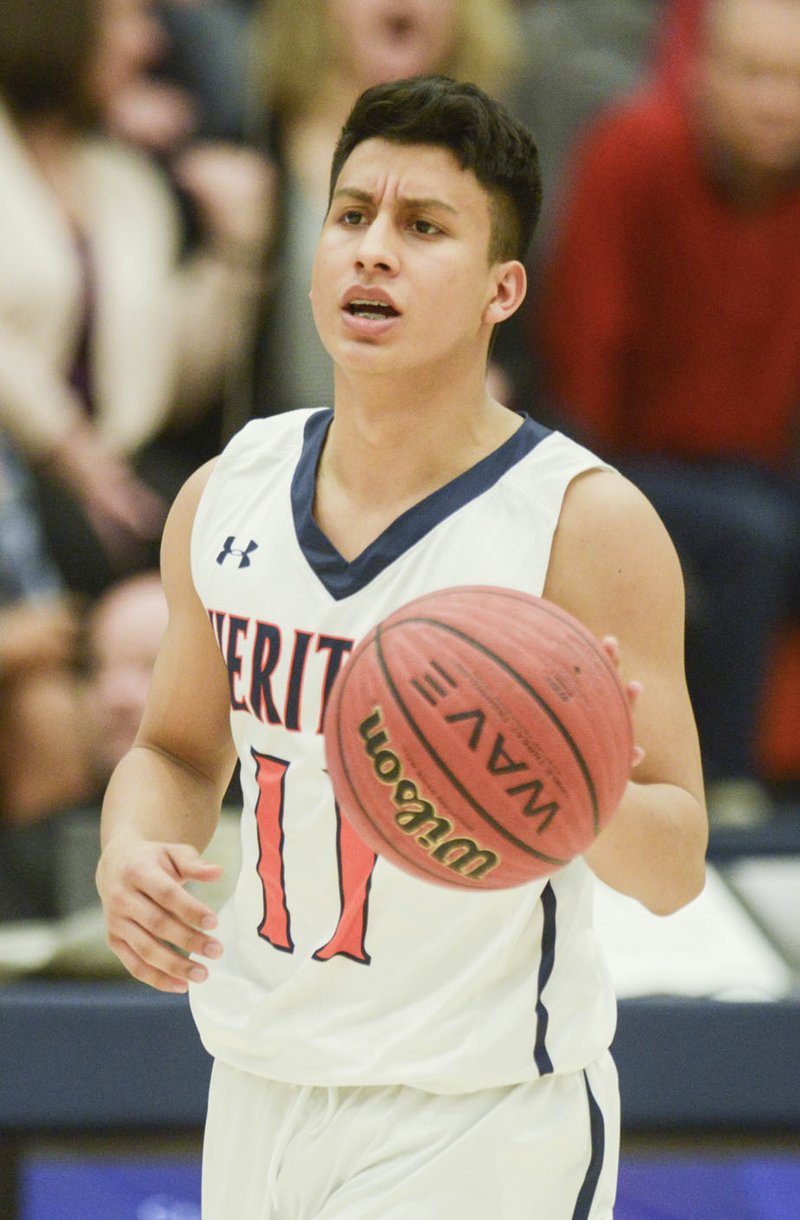 NWA Democrat-Gazette/CHARLIE KAIJO Rogers Heritage High School guard Ernesto Rodruiguez (11) looks to pass during a basketball game, Friday, January 25, 2019 at War Eagle Arena at Rogers Heritage High School in Rogers. The senior moved from El Salvador with his parents a year ago. He may have only learned English over the last year, but he communicates just fine on the basketball court.

ROGERS -- Ernesto Rodriguez looked a little like a quarterback firing a pass to a receiver when he hit a teammate perfectly in stride with a one-handed pass from more than three-quarters of the court late in Rogers Heritage's 6A-West Conference game against Van Buren.

Logan Clines didn't even have to dribble, instead, he made the catch and laid the ball in for an easy two points. He turned and made eye contact with Rodriguez, who did a little bicep muscle flex and then showed off a big smile.

Notable Played for the El Salvadoran U-16 National Team. … Moved to Rogers almost exactly a year ago with his parents and older sister. … Averaging seven points per game for the War Eagles but acts more as a playmaker at the point guard position. … Suffered a torn anterior cruciate ligament in his knee in mid-December and missed nine games but came back in January, and the War Eagles are 4-3 since he returned to action. Tied for the team scoring honors with 14 points in Heritage’s win over Van Buren on Tuesday.

No other words were necessary.

Clines' layup pushed the War Eagles' lead to 16 points and all but sealed the victory on Tuesday night. He and the War Eagles (10-14, 5-7 6A-West) are still fighting for a state tournament spot, after a loss at Bentonville West on Friday.

The 18-year-old has only been in this country for a year. His English is very limited, but he's become a big part of the War Eagles' team, Heritage coach Tom Olsen said.

"He's our emotional leader," Olsen said. "To put it bluntly, he's a good example of you don't have to be able to speak to be a great leader. His passion and his team play and work ethic have just kind of set him apart."

Rodriguez and his parents moved to Rogers from El Salvador a year ago with his older sister, and he initially struggled to communicate since he didn't speak English very well. But Olsen and the War Eagles figured out a perfect way to bridge that communication gap, and that was the universal language of basketball.

"I felt uncomfortable at first," Rodriguez said with the aid of an interpreter. "But better when my teammates started to support me and help me out. There was more respect. I felt like when we played it was as if we were all speaking the same language, which is basketball."

Rodriguez was in a P.E. class taught by Paul Boyles, the Heritage freshman basketball coach. He went to Boyles to ask about playing basketball not long after he came to Heritage.

Olsen acknowledged that coaches get more than a few requests, but they figured out quickly Rodriguez was different. He found out later Rodriguez had played for El Salvador's U-16 National team.

"His best attribute is his competitive spirit," Olsen said. "But we could see he could handle the ball, has good strength and quickness and can see the floor really well. It was kind of a no-brainer that we had a kid here who we thought could really help us."

Rodriguez said the basketball in the 6A-West is different from the one he played in El Salvador.

"I felt like we ran more there, but here it's like you have to be more intelligent on the court," Rodriguez said. "Players are a lot taller here, and the level of competition is better."

Rodriguez and the War Eagles got off to a solid start, but then it looked as though the War Eagles might have lost their senior point guard for the season when he went down with a knee injury in mid-December.

But the 18-year-old made the decision to rehab and return for the remainder of his senior season, despite a torn anterior cruciate ligament. Olsen said his work ethic was the only reason he was even able to return.

"His core strength and his strength in his quads is just tremendous," Olsen said. "He's also just a very unselfish kid, and the way he shares the ball and cheers for his teammates when he's not on the court. That was a real blow when he went down."

The War Eagles went just 2-7 in games without Rodriguez, and junior Jason Kimball admitted the team missed him.

"Ernie's just been the heart and soul," Kimball said. "... Ernie just came in here, and we're all like 'This new kid just had a fire' and we just wrapped our arms around him.

"We had issues getting in the paint. We just had pace issues. Our losses piled up. We just kinda lost that heart and soul, and when he came back he brought us back together, and we realized we had something special here with him, and we got back on track."

Rodriguez was happy to get the chance to compete again with a group that's become special to him. Basketball has also helped to motivate him to work harder in the classroom, too.

"I feel like a normal person with a normal agenda, but someone says 'Hey, you play basketball,' and that makes me feel special. I belong to a family, not just a team but a family.

"I feel that I understand my teammates and feel really comfortable with them because at the end of the day we're speaking the same language, which is basketball."