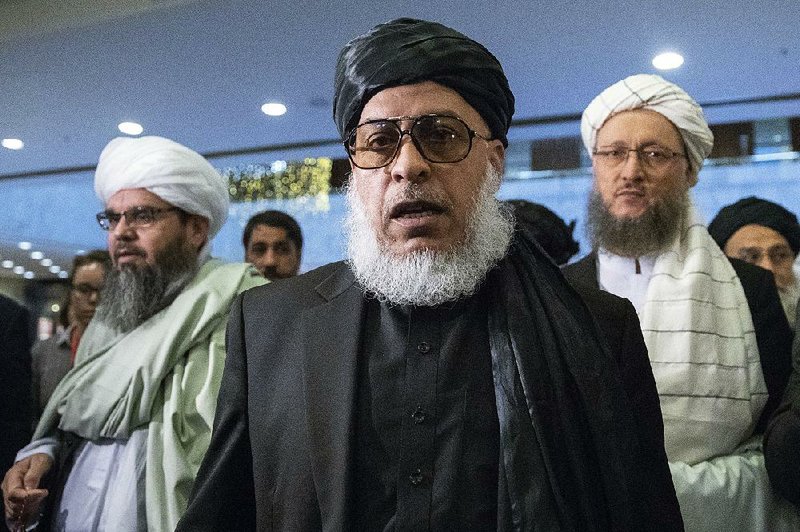 Sher Mohammad Abbas Stanikzai, a Taliban mullah, attends talks in Moscow last week. Stanikzai is to lead the Taliban negotiating team when it meets with U.S. officials later this month.

KABUL, Afghanistan -- The Taliban on Tuesday announced a 14-member negotiating team ahead of talks this month with U.S. envoy Zalmay Khalilzad, who has been meeting with the insurgents to try to end America's longest war.

Sher Mohammad Abbas Stanikzai will head the Taliban team, which includes five former inmates of the U.S. prison at Guantanamo Bay who were released in 2014 in exchange for U.S. Sgt. Bowe Bergdahl, who was captured by the Taliban in 2009 after wandering off his base. The team also includes Anas Haqqani, the jailed younger brother of the leader of the Haqqani network, a powerful Taliban faction.

Taliban spokesman Zabihullah Mujahid said Haqqani, currently held in Kabul, "should be released to start work on the negotiating team." Mujahid said Tuesday that Haqqani "was a student at the time of his arrest and was not involved in any activity for which he should be arrested."

The Taliban have demanded Haqqani's release since talks began last year. By naming him to the negotiating team, the Haqqani network might be indicating that his release is a precondition for their participation.

The network has not been openly involved in talks with the U.S. envoy, except to send three representatives to a meeting in the United Arab Emirates in December. That meeting reportedly touched on the issue of prisoners, including Anas Haqqani and two professors from the American University in Kabul -- Kevin King, an American, and Timothy Weeks, an Australian -- who are believed to be held by the Haqqani network. The two professors were abducted in 2016 from Kabul. A video released more than a year ago indicated King was in poor health.

The Taliban have so far refused to meet with the U.S.-backed government in Kabul, instead holding meetings in Moscow earlier this month with prominent Afghan figures, including former President Hamid Karzai.

Afghan President Ashraf Ghani has complained about being sidelined, and it's not clear that his government would be willing to release Haqqani without being granted a larger role in the process.

The U.S. envoy met Monday with NATO and European Union officials in Brussels, and tweeted that he was "encouraged by their strong endorsement on the progress we've made on a peace process." He said the sides are aiming to reach a peace deal "worthy of the sacrifices made over decades of war," and not a withdrawal agreement.

This was Khalilzad's first stop on a three-week mission that will also take him to Germany, Turkey, Qatar, Afghanistan and Pakistan.

President Donald Trump has indicated frustration with the war in Afghanistan and has said he wanted to bring U.S. troops home. There were earlier reports that the U.S. would withdraw half of its roughly 14,000 soldiers by the summer. Another 8,000 NATO and allied troops are in Afghanistan.

The U.S. and NATO troops are mostly advising and training, although when requested they assist Afghan forces in battles with the Taliban, who carry out near-daily assaults on Afghan soldiers and police. More than 17 years after their ouster, the Taliban control, influence or hold sway over nearly half the country. 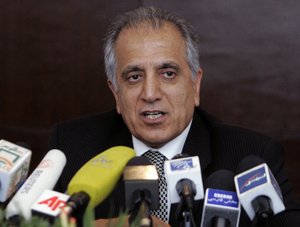 Photo by AP file photo
In this March 13, 2009, file photo, Zalmay Khalilzad, special adviser on reconciliation, speaks during a news conference in Kabul, Afghanistan. U.S. envoy Zalmay Khalilzad said Saturday, Jan. 26, 2019, that "significant progress" was made during lengthy talks with the Taliban in Qatar and that he was traveling to Afghanistan for more discussions aimed at ending the country's destructive 17-year war.