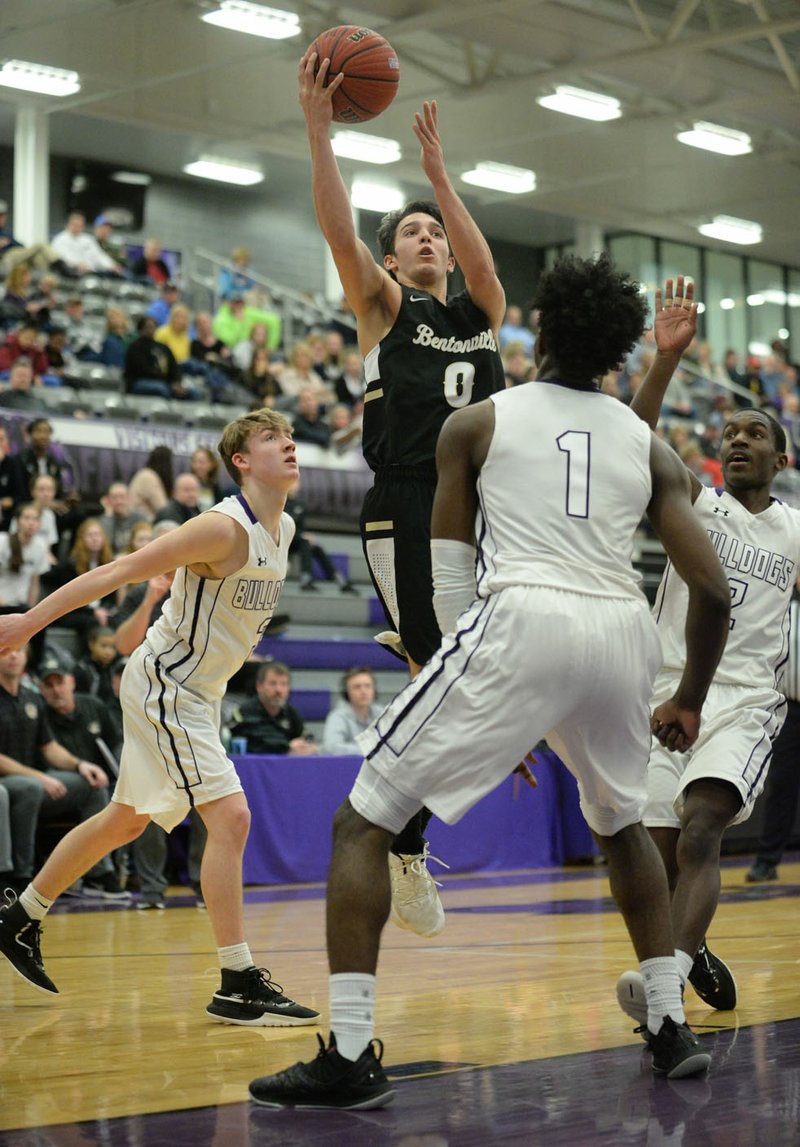 NWA Democrat-Gazette/ANDY SHUPE Bentonville's Thane Spencer (0) reaches to score over Fayetteville's Austin Garrett (1) Tuesday, Feb. 12, 2019, during the second half in Bulldog Arena in Fayetteville. Visit nwadg.com/photos to see more photographs from the games.

FAYETTEVILLE -- Fayetteville's opportunity to clinch the 6A-West Conference's top boys seed will have to wait a little while longer.

Bentonville kept its hopes alive Tuesday night as Michael Shanks scored eight of his 13 points in the fourth quarter and helped the Tigers claim a 56-49 victory in Bulldog Arena.

"I'm just proud of our guys," Bentonville coach Dick Rippee said. "They showed a lot of resiliency. We were missing a starter and best defender in Sawyer Price, and others stepped in. Shanks isn't 100 percent, but he played much better and gaining confidence as we go.

"I just thought we were solid. It was a great team effort."

Bentonville (19-5, 9-2) had a 38-26 lead after Connor Deffebaugh's three-point play with 5 minutes, 7 seconds left in the third quarter before Fayetteville stormed back with an 11-0 run. Darius Bowers then gave the Purple'Dogs their first lead since the first quarter when his three-point play made it 45-44 with 5:24 remaining.

Shanks hit two free throws to put the Tigers back in front, only to have Bowers score and force another lead change. Shanks, who missed two games and only played limited minutes in Bentonville's loss Friday against Rogers Heritage, then hit back-to-back buckets in a 20-second span to put the Tigers ahead to stay.

"The knee is sore and hurting right now," Shanks said. "But it feels great after that big win we got. Just finishing the game is what we've been taught, and we finished."

Fayetteville did make it a 50-49 game on Connor Barnett's bucket with 1:25 left and had a chance to take the lead, but Barnett couldn't get a 3-pointer to fall. Bentonville then sealed the win with six free throws -- two each by Deffebaugh, Brayden Freeman and Thane Spencer -- in the final 60 seconds. Spencer, a sophomore who filled in for starter Sawyer Price, also had two critical steals in the final minute.

The Bulldogs, despite their loss, remain one game ahead of the Tigers in the league standings with three games remaining and have the tiebreaker advantage over Bentonville.

"I think we were so bad in the first half, and it was hard to fight out of that hole," Fayetteville coach Kyle Adams said. "In the second half, I was pleased with how hard we played. We did some things that made us more effective on the offensive end. For us, offense turns into bad defense when we take bad shots.

"It's not about losing ball games. We've lost ball games before. It's about how we performed, and I don't think we performed very well. We're just trying to build and get better going into the state tournament. For some reason, we didn't play, and that one's on me."

Freeman led Bentonville with 14 and Deffenbaugh finished with 10. Tamaury Releford had 15 to lead Fayetteville, while Collin Cooper chipped in 11.

The War Eagles shot a blistering 62 percent from the floor and turned back a late Van Buren challenge to pick up the 6A-West Conference win on Tuesday at War Eagle Arena.

Heritage coach Tom Olsen said his team, which has now won three of its last four, is playing well together and especially with Rodriguez at the control.

"We had good balance, and after a real emotional win last Friday night this is a worry," Olsen said. "The kids did what we needed to do to get the victory. I think we're starting to come together here right at the right time."

"Ernie's an emotional leader for us. He did a good job taking care of the ball. When he's on the floor we have a lot of confidence, and he finds a lot of guys down the floor to make baskets. He's a big part of us obviously."

Springdale Har-Ber's Caleb Pieroni hit one shot during his team's win Tuesday night, but his 3-pointer at the buzzer of the third quarter might have been one of the biggest baskets of the game, his coach said.

"He wouldn't shoot it against Springdale or Heritage, and we told him, 'Shoot it. No one's telling you not to shoot it,'" Har-Ber coach Scott Bowlin said.

The three capped off an impressive period from the Wildcats (9-12, 5-6) that saw the team use a 13-0 run to take its first and final lead of the night in the Wildcats' 73-51 win over Bentonville West (9-15, 3-8). Lawson Jenkins and Nick Buchanan combined for 13 points during the third to lead the team's comeback effort.

The duo would go on to combine for 55 points with Jenkins leading the team with a game-high 32.

The win gives Har-Ber sole possession of fourth place in the 6A-West after Springdale lost to Rogers, 49-44. Rogers Heritage, which was also tied with both Springdale teams for the last playoff spot, beat Van Buren but lost the season series and tiebreaker to Har-Ber.

Dawson Bailey and Jonas Higson had nine points each for West as Dawson was the sole player to score for West during the Har-Ber's big third quarter.

Rogers coach Lamont Frazier was happy to come away with the win Tuesday night but was not quite as happy about his team committing 17 turnovers.

"We were our own worse enemy out there tonight," Frazier said. "Our initial defense caused them to miss shots, but we just couldn't finish possessions. That's not as clean as it can be. If we can shore up some of things up, then the game's a little different."

Springdale's Chops Sanders scored six of his game-high 12 points in the fourth quarter.

Will Voigt and Elliot Paschal each had 11 for the Mounties. Jujuan Boyd also had 11 for Springdale. 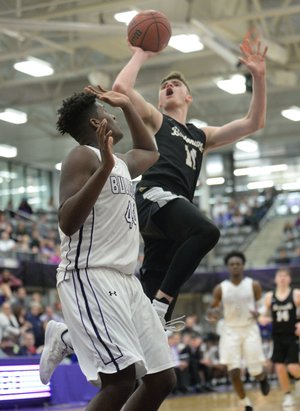 NWA Democrat-Gazette/ANDY SHUPE Bentonville's Michael Shanks (11) takes a shot over Fayetteville's Tamaury Releford Tuesday, Feb. 12, 2019, during the second half in Bulldog Arena in Fayetteville. Visit nwadg.com/photos to see more photographs from the games. 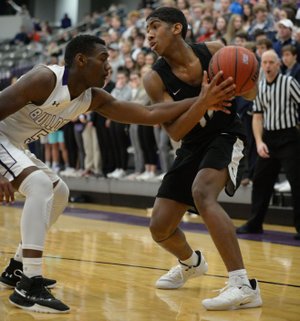