If the box for the new Blu-ray of Rodents of Unusual Size didn't say it was a documentary, it would be easy to assume it was either a science fiction film, a horror flick or a Louisiana-based Christopher Guest mockumentary.

It might have something to do with its stars.

The film covers how the residents of Delacroix and New Orleans struggle to deal with 20-pound creatures with shiny brown fur and large, sharp orange teeth.

Nutria, as they're called, came here, not from some distant planet, but from Argentina, and the danger they pose to human-made infrastructure and the environment is formidable and sadly real.

"You have to admire them. They're very cute, especially when they're babies," says St. Louis-based Michael E. Beran in a telephone interview. In the film and off-screen he and his company, Wildlife Command Center, trap nutria and work to undo the damage they can do. Pest Command Center, a branch of the company, has been based in Little Rock for seven years. Beran served as a consultant on the film, and he has hunted and trapped them since he was a child.

Nutria now number in the tens of millions because the animals who ate them in South America, yellow anacondas and wild cats, aren't around to keep their populations in check. In the 1930s, nutria were prized for their pelts, but when the market for fur coats fell in the 1980s, nutria, through no fault of their own, became a menace. They currently jeopardize agriculture and urban dwellers in Louisiana, Arkansas and other states. While they prefer plants, nutria will eat carrion or even cardboard boxes. Trees don't grow back after nutria feed because they eat the roots

"When we as humans misplace creatures like European starlings, house sparrows, pigeons and nutria, they thrive," Beran says. "And then they start problems for the very species that brought them, humans. Their dens and their burrow system starts at the waterline. They burrow in. They go down a little bit, and then they go back up.

"When these creatures procreate, and the offspring become of age, which is about 6 months old, they'll spread out by the levee line, and they'll dig in in other areas. When they hear each other digging, they'll connect those tunnels. There will be this labyrinth of tunnels underneath the embankment, and if you drive a vehicle over it, or if you get a high water situation, those columns are going to collapse."

Rodents of Unusual Size balances the nutria's menace with their appealing quirks. Metzler specializes in making environment documentaries that reveal the folly of toying with nature's designs while also celebrating how people adapt when their homes are no longer desirable because the land and water have lost their bounty.

He and Jeff Springer made Plagues and Pleasures of the Salton Sea (2004), about a California saltwater lake that has gone from a tourist haven to disaster site. It features droll narration from John Waters, and Rodents of Unusual Size has a wry voice-over by Crescent City native Wendell Pierce (The Wire, Treme). Metzler has teamed again with Springer and with Quinn Costello for the new film.

"I was on the road for Plagues and Pleasure of the Salton Sea,"Metzler says from California. "After a festival in Shreveport, the wife of a programmer said to me, 'You like weird environmental documentaries? Let me tell you what we have in Louisiana. She proceeded to tell me about these 20-pound rats that were eating up the state. I filed it away for many years later. I talked with my friends Jeff and Quinn, and they pointed out the creative ways the state is trying to deal with the problem."

"Creative" is an understatement.

The film features a fashion show of nutria-based garments. Residents of Delacroix hunt nutria for a $5 bounty on their tails. The hunts across the barren lands look like something from a Mad Max movie.

"I think there's this kind of symbiotic relationship that Louisianans have with the nutria. The nutria never asked to be brought to Louisiana. They found their Garden of Eden in the wetlands of the state. They've been in Louisiana for such a long period of time that people have just accepted them as part of the culture," Metzler says.

"The tagline of the film is 'They do exist.' ... when people come to see our movie, they think they're walking into a horror movie. They think, 'This is a documentary for real?' I describe them as kind of a super-sized New York City sewer rat and a beaver."

New Orleans chefs even serve the animals as delicacies. Fans for free-range meat are unlikely to find a dish freer of the ravages of antibiotics or drugs.

"They are very edible," Beran says. "I've been eating them since I was a little kid."

While the animal control expert is happy with the way the film presents him and his native land, Beran recalls being reluctant when he saw the camera crews for the film arriving in New Orleans.

"When [they] approached me, I was working a contract in New Orleans, and I was immediately very hesitant because I didn't know them, and I didn't know what the cameras were for. Typically, in my line of work, you've got people who love me and hail me as a hero, and you've got other people who think I'm as villainous as Darth Vader."

Curiously, his job would be impossible if he didn't have a genuine fondness for animals. Throughout our 20-minute conversation, he rattled off details about nutria that would make a biology professor blush. The film also shows that he couldn't do his job without the help of a close friend who doesn't walk on two legs.

"Dub, my dog -- his name's George W. Bush -- he is an integral part of my business," he says. "As are all of the animals that we have. When we're live trapping, he really alerts me to where the nutria are and which traps the nutria are in. That's important because the banks on those canals are very steep. I'm 53 years old, and I don't want to climb up and down each one to check the trap. When Dub barks, I know I've got to climb down that steep embankment there," Beran says.

Metzler says that he and his collaborators try to make films that capitalize on local eccentricities without treating the people they film with condescension.

"As a filmmaker, when we're making these documentaries, we're not making these agitprop with heavy social issues kind of film," he says. "We really like to explore people who are doing interesting and different things and how they kind of live life -- in this case with joy -- even with all the difficulties. People in our films have this kind of poetic melancholy, but they also deal with things one day at time and get as much out it in the fun ways that they do." 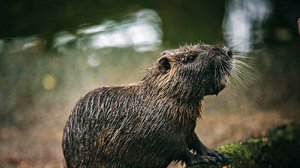