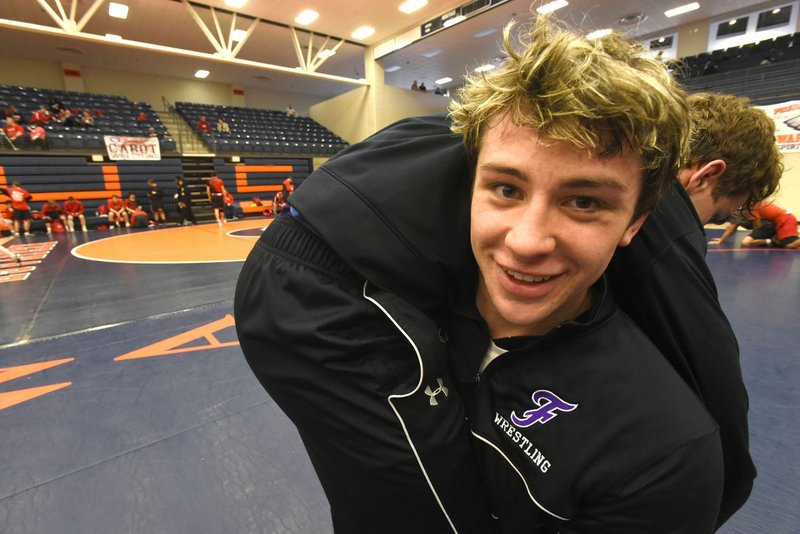 NWA Democrat-Gazette/FLIP PUTTHOFF Matthew Muller, shown warming up with a teammate before last weekend's Class 6A dual state tournament, will be looking to tune-up the upcoming state tournament in Saturday's Big West Conference wrestling tournament at Bulldog Arena in Fayetteville.

FAYETTEVILLE -- Matthew Muller made a dream come true by signing a letter of intent to wrestle at the Division I college level earlier this year.

The Fayetteville senior had thoughts of playing college football when he was younger, but wrestling turned into his ticket -- especially after excelling at the United States Junior Nationals last summer in Fargo, N.D.

But the 18-year-old has struggled at times this season with some self-imposed pressure after signing with Arkansas-Little Rock.

And Muller has definitely turned into the guy. He won the 6A-7A state title at 182 pounds as a junior, knocking off the No. 1 seed in the finals. He also enjoyed success in Fargo.

"He had a nice run at Fargo making the second group of 16, and he was really two wins from being an All-American," West said. "But he's had trouble finding his groove a little bit. After he signed, he didn't think he was supposed to get beat. He was focused on everybody's watching me.

"But the month of January has been great for him. He's getting back to normal and having fun."

Muller will look to tune up for the state tournament in two weeks with the Big West Conference Tournament on Saturday at Fayetteville's Bulldog Arena. He comes into that event with a 51-7 record with wins at the Branson (Mo.) Invitational and Bryant Invitational already under his belt.

West said he saw some special qualities in Muller when he came to Fayetteville. But West acknowledged he wasn't sure if he would wrestle in college, especially since football was still in the picture at that time.

"I told him then he was going to be a leader," West said. "He's always hungry and wants to learn. His leadership and work ethic stuck out. What he did in Fargo last summer, I think, opened his eyes that 'I can potentially do this.'"

He also learned from an early season loss to Springdale Har-Ber's Ben Fears and bounced back to beat him in the Big West Conference tournament and again in the state finals.

"I feel like I grew throughout the entirety of last season," Muller said. "I was able to attack more, get my takedowns and have more confidence."

But keeping that confidence is not always easy, Muller said.

"I hate losing, and I don't want to lose, but understanding fear of losing is bad was what I needed to do," Muller said. "I can't be afraid to lose. But I've been working on that, and I feel like I'm overcoming it."

Muller played center at around 210 pounds and was forced to use his quickness against bigger defensive linemen. He puts those skills to good use on the mat, too, even though he's wrestling at 182.

So football and wrestling go hand in hand. Muller even joked about inadvertently going into wrestling mode during football at times, which would also draw the ire of Fayetteville assistant coach Benji Mahan.

"Occasionally I'd be driving into someone and feel them pressure back in and just without even thinking I'd snap them down," Muller said with a laugh. "Coach Mahan would go 'That's a holding call!'"

He was in a similar situation last week when West chose to bump him up two weight classes to wrestle at 220 in Fayetteville's dual against Bentonville West at the Class 6A Dual State tournament.

Muller took an early lead thanks to his speed and eventually pinned his opponent in the second period.

He's hoping to see that his opponents on Saturday suffer a similar fate.