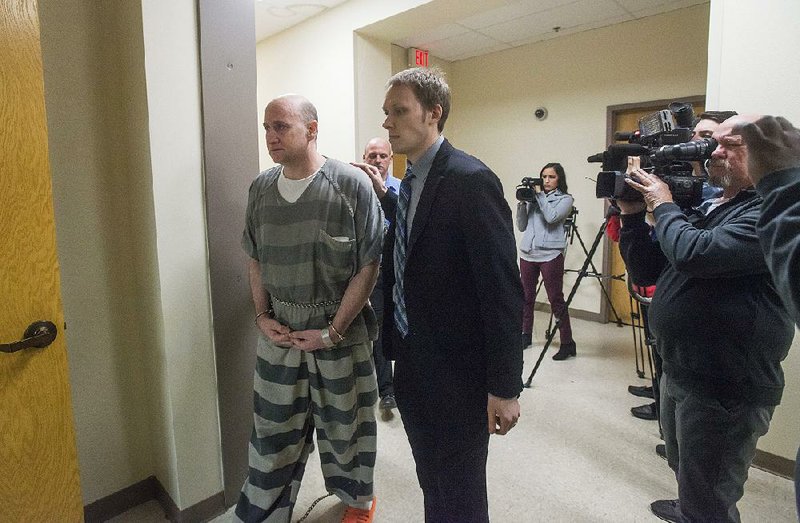 BENTONVILLE -- Amy Harrison faced the man Thursday who raped her 21 years ago.

"I know there was nothing I did to make this happen," she told Grant Hardin. "I could not have done anything differently, and I definitely did not deserve to be raped. I was just choosing to do the next right thing in my life when you bumped into me."

Harrison appeared nervous at first, tears in her eyes. Her voice grew stronger as she spoke.

"So, now I am going to use my free will to overcome the evil you did to me. I am going to walk out of this building with my family and friends and enjoy the fresh air before I go home. I hope that my story is an encouragement to all survivors who fight for justice."

Hardin, 50, pleaded guilty Thursday to raping Harrison at Tillery Elementary School in November 1997 as the teacher prepared lessons on a Sunday morning. The Northwest Arkansas Democrat-Gazette usually doesn't name victims of sexual assault, but Harrison agreed to be named, according to Benton County Prosecutor Nathan Smith.

Harrison gave her victim impact statement after Hardin's plea. She talked about that day and how it changed her life. People in the courtroom could be heard crying as she spoke.

"I got to face him and got to look at him while I read my statement and that felt really good," she said later at a news conference at the Rogers Police Department.

Benton County Circuit Judge Robin Green sentenced Hardin to 25 years on each of the counts. Hardin pleaded guilty to murder in 2017 and received a 30-year sentence.

The rape sentences will run concurrently with the murder sentence, which means Hardin will have to serve 21 years of the 30-year sentence for the murder, and then must serve an additional 14 years before he'll be eligible for parole. He will be 84-years-old by the time he's eligible.

Harrison told police she arrived at the school a little before 9 a.m. and worked alone. She went to the restroom in the teacher's lounge about 11:30 a.m. When she left the lounge, a man holding a gun forced her back inside, she said. He raped her and fled, according to police reports.

Her attacker wore a stocking cap and sunglasses but no shoes; took care not to touch any surfaces; covered her face with her pants at times; and took her underwear. Police suspected at the time the man may have had law enforcement training.

The rapist was careful, but he left something behind. Her rapist seemed surprised, the teacher told police, when he ejaculated. She used her hand to wipe his semen off her leg and onto her sweatshirt and T-shirt after he left. That move ultimately led to Hardin's arrest.

In 2003, police obtained a warrant for a "John Doe" suspect in the case based on the DNA evidence. A John Doe warrant is an arrest warrant for an individual whose name isn't known. The statute of limitation for rape in Arkansas is six years, and the warrant was filed before time expired so the case could be prosecuted if a suspect was found.

The state obtained Hardin's DNA after he pleaded guilty to first-degree murder in October 2017 for killing James Appleton.

Green questioned Hardin about whether he knew Harrison in 1997 before the rape.

"Was she targeted or was this a crime of opportunity?" she asked.

He said it was a crime of opportunity.

Did Hardin have anything to say to Harrison, Green asked.

"You can hear the hurt in her voice," Green told him.

Hardin turned and looked toward Harrison.

"I just want to say I hate my old life and hope one day you will be able to forgive me. I'm sorry," he said.

Harrison's family members, police officers and other supporters sat on one side of the courtroom.

Hardin's wife and teenage daughter sat on the other side.

Hardin was the police chief of Gateway for four months in 2016 and served two terms as a constable in Benton County. He worked as a police officer in Fayetteville, Huntsville and Eureka Springs from 1990 to 1996.

Hardin was working at the Northwest Arkansas Community Correction Center in Fayetteville at the time he was arrested for killing James Appleton, according to court documents. The prison is for women incarcerated for nonviolent or non-sex related charges.

Rogers Police Chief Hayes Minor and Benton County Prosecutor Nathan Smith praised Harrison for her courage and her actions that led to the recovery of the DNA sample.

Minor was one of the detectives called to the scene in 1997. He said many of the officers knew Harrison, whose husband was a fellow Rogers officer. The case was important to the department, he said. Once a year detectives would set aside at least a week to concentrate on solving it, he said.

Minor told Harrison at the news conference he was happy for her.

"I hope getting justice is inspiration for other people who are survivors," Harrison said at the news conference.

Hardin asking her for forgiveness is a big request, Harrison said.

"I'm not sure that forgiveness is the word I can use," she said. "He's where he needs to be, and I'm where I need to be and I will move on." 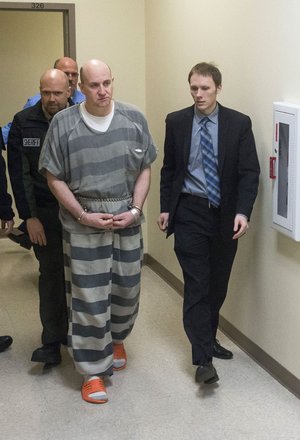 Photo by Ben Goff
Grant Hardin walks Thursday into court with Kevin Lammers (right), a Benton County deputy public defender, at the Benton County Courthouse in Bentonville. Hardin, a former police chief and officer, pleaded guilty to raping Amy Harrison in 1997 at Tillery Elementary School in Rogers. Harrison was a teacher at the time. 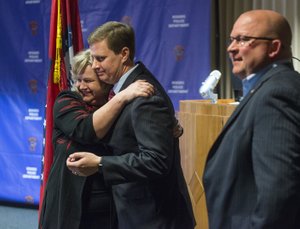 Photo by Ben Goff
Amy Harrison hugs Nathan Smith, Benton County prosecutor, as Hayes Minor, Rogers chief of police looks on Thursday during a news conference at the Rogers Police Department. The conference was held following Grant Hardin pleading guilty to raping Harrison, at the time a teacher at Tillery Elementary School, in 1997.