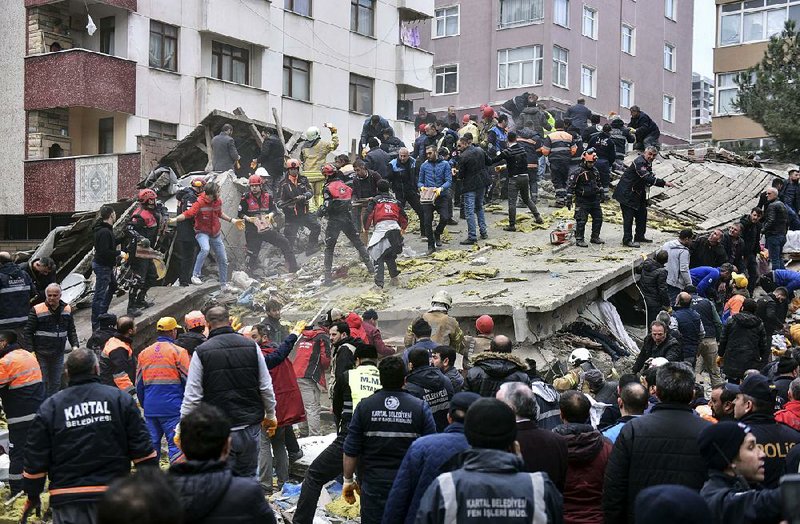 Rescue crews work to remove the debris of an eight-story building that collapsed Wednesday in Istanbul.

ISTANBUL -- An eight-story building collapsed in Istanbul on Wednesday, killing at least two people, Turkish officials said. Rescue workers pulled six others out of the rubble and were working to free more who were trapped.

The building, which had 43 people living in 14 apartments, had a street-level ground floor and seven higher floors, Istanbul Gov. Ali Yerlikaya said, adding that the top three floors had been built illegally.

It was not immediately clear how many people were trapped in the wreckage.

Former Prime Minister Binali Yildirim told reporters at the site that six people were pulled out of the rubble alive and that rescuers had made contact with four others still inside the wreckage.

"Racing against time, the teams are working, making great sacrifices," said Yildirim, the current parliament speaker who is running for mayor of Istanbul in Turkey's March 31 local elections.

"We will work without interruption until the search and rescue operation is complete," Yerlikaya told reporters.

The chief prosecutor's office said it launched an investigation into the collapse of the 27-year-old building. Yildirim said neighboring buildings had been evacuated in case they were also damaged.

Jehovah's Witness off to Russian prison

MOSCOW -- A regional court in western Russia on Wednesday sentenced a Danish Jehovah's Witness to six years in prison in one of the most severe crackdowns on religious freedom in Russia in recent years.

The court in Oryol found Dennis Christensen guilty of extremism, making him the first Jehovah's Witness in Russia to be sent to prison.

Christensen was detained during a police raid on a prayer meeting he was leading in May 2017.

"I do not agree with this judgment; it's a big mistake," Christensen told reporters after the sentencing.

The verdict was met with consternation around the world, including from the U.S. Embassy, which expressed its concern and urged Russia to respect religious freedom.

Russia in recent years has used its vaguely worded extremism laws to go after dissenters, opposition activists and most recently religious minorities. Russia officially banned the Jehovah's Witnesses in 2017 and declared the religious group an extremist organization.

Nearly 100 members of the group face charges in Russia, and more than 20 of them are in jail awaiting trial. Before the ban, the world headquarters of the Jehovah's Witnesses claimed about 170,000 adherents in Russia.

TEHRAN, Iran -- Gunmen killed one Iranian police officer and wounded a second in a shootout Wednesday during which a stray bullet hit a fuel tanker, causing it to explode, Iran's state TV reported. Authorities later said five suspects were arrested.

State TV quoted Gen. Mohammad Mahdia, police chief in western Lorestan province where the shootout took place, as saying the suspects belong to two different groups. He did not elaborate but said an investigation was ongoing.

The report said the shootout occurred near a gas station and that the explosion of the tanker shattered the windows of a nearby building. The slain policeman was identified as Najmeddin Bavi.

State TV said the wounded police officer, Lt. Jaber Beiranvand, was in intensive care at a hospital. The report said the gunmen initially opened fire on the tanker and then on the police who were patrolling the area. The assailants later fled in a stolen car.

The heavily rural Lorestan province has seen occasional tribal-related clashes, and many people in the area have firearms.

In November, authorities confiscated about 150 guns from smugglers in the province.

BEIJING -- At least eight people were killed and seven wounded when a man in a rural part of northwest China attacked fellow residents with a knife before being arrested, police said Wednesday, as the country was celebrating the Lunar New Year.

A brief police account of the attack Tuesday in Huining County, Gansu province, left many questions unanswered, including the identities of the victims. But the local public security bureau said the attacker, a 49-year-old man surnamed Guo, had been drinking and suspected his wife of having an affair.

"According to Guo's initial confession, he suspected his wife of engaging in illicit sexual relations," the police report said.

Guo had been drinking, the account said, and entered another villager's home early Tuesday with a knife or cleaver and began attacking. The account did not make clear whether he went to more than one home or whether those killed included his wife or other relatives. The police said they were still investigating.

The mayhem occurred on what Chinese people call "chu yi," the first day of the traditional Lunar New Year, when extended families are often gathered together after a night of banquets, toasts and fireworks to see out the old year and bring in the new.