Arkansas actress who starred in ’54 horror classic dies at 92 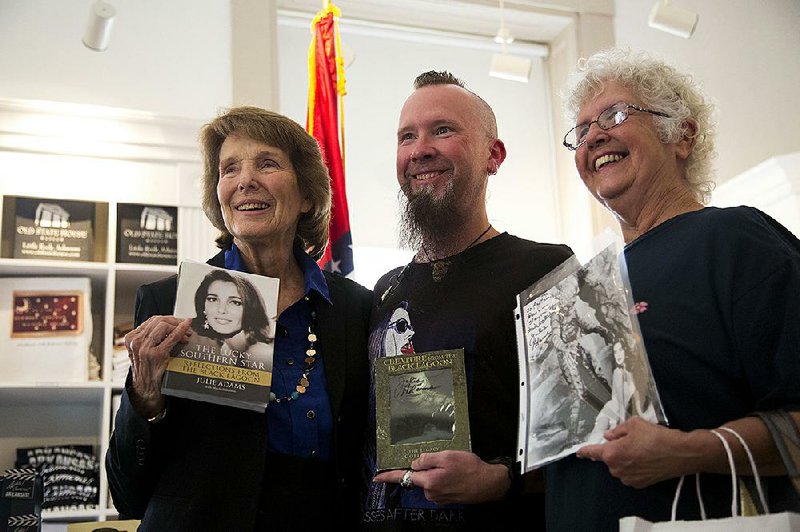 FILE — David Garrett, center, and his mother, right, pose with Hollywood star and Arkansas native Julie Adams at a book signing August 10 at the Old Statehouse.

Julie Adams, the Arkansas actress who starred in the 1954 film Creature from the Black Lagoon, died Sunday in Los Angeles, said her son Mitch Danton.

During her Hollywood career, Adams appeared in 50 films and hundreds of television episodes.

Born Betty May Adams on Oct. 17, 1926, in Waterloo, Iowa, she grew up in Blytheville and later moved to central Arkansas, where she was crowned Miss Little Rock in 1946.

Danton said his mother was a cheerleader and a junior lifeguard in Blytheville.

Adams spent much of her childhood at the Ritz movie theater in Blytheville. In a 2013 interview for the Arkansas Democrat-Gazette, Adams said the theater was "the best place in town."

By the time she made her acting debut in a third-grade production of Hansel and Gretel, Adams wanted to be a movie star.

"She just had a dream of something more glamorous than Arkansas," Danton said. "She wanted to be in fancy outfits with lavish hair on movie sets. She grew up during the Depression and went to movies a lot."

Adams loved going with her father, Ralph Adams, a cotton buyer, to look at cotton crops in the Delta. But he died when she was 15 years old, and she went to live with an aunt and uncle in Malvern.

She attended high school in Little Rock and then went to Little Rock Junior College, which is now the University of Arkansas at Little Rock.

After being crowned Miss Little Rock, Adams decided she might have the looks and talent to make it in the movies, Danton said.

"I had a kind aunt living in California," Adams told the Democrat-Gazette in 2013. "Really, she was my father's first wife, but she always loved him. She lived in Long Beach, and she owned a bathing suit shop."

"Aunt" Ruth offered a chance to try for the movies -- and a swimsuit-modeling job in the meantime -- "and so I took her up on it," Adams said.

Adams quit a $20-a-week secretarial job at the Arkansas Capitol to fly to California.

The 19-year-old hopeful's first part in a picture was almost too small to count. She posed for the cover of a magazine that appeared in Red, Hot and Blue (1949), a gangster movie with Betty Hutton.

The barely true promise that she could stay on a horse led to a series of Westerns.

"Six Westerns in five weeks," she said. "But that was the thing that got me a screen test at Universal, and that led to my contract."

She appeared in 21 films for the studio over a period of seven years (1951-58). She changed her name to Julia, then to Julie.

In the 1950s and 1960s, she co-starred with some of the biggest names in Hollywood, including Jimmy Stewart (Bend of the River), Rock Hudson (The Lawless Breed), Charlton Heston (The Private War of Major Benson) and Elvis Presley (Tickle Me).

Adams acted onstage, starring in more than a dozen plays. She won a 1989 Drama-Logue Award for her portrayal of Mary Tyrone in Eugene O'Neill's Long Day's Journey Into Night.

She was inducted into the Arkansas Entertainers Hall of Fame in 2000 and received a Distinguished Alumni Award from University of Arkansas at Little Rock in 2013.

Danton said his mother was probably best remembered for her role in her one and only horror film, Creature from the Black Lagoon.

"To this day, millions of fans around the world still adore her portrayal of Kay Lawrence, the lovely bathing beauty in the classic sci-fi film," he said. "For years and years, she tried to move on from the film, but the fans just loved that movie so much, she finally just embraced it."

Danton said his mother loved Arkansas and, at the time of her death, owned 40 acres of land in the Ozarks.

She had two sons, Steve and Mitch, from her marriage with actor/director Ray Danton.

Mitch Danton said some of his mother's ashes will be buried next to her father's grave at Oak Ridge Cemetery in Malvern.