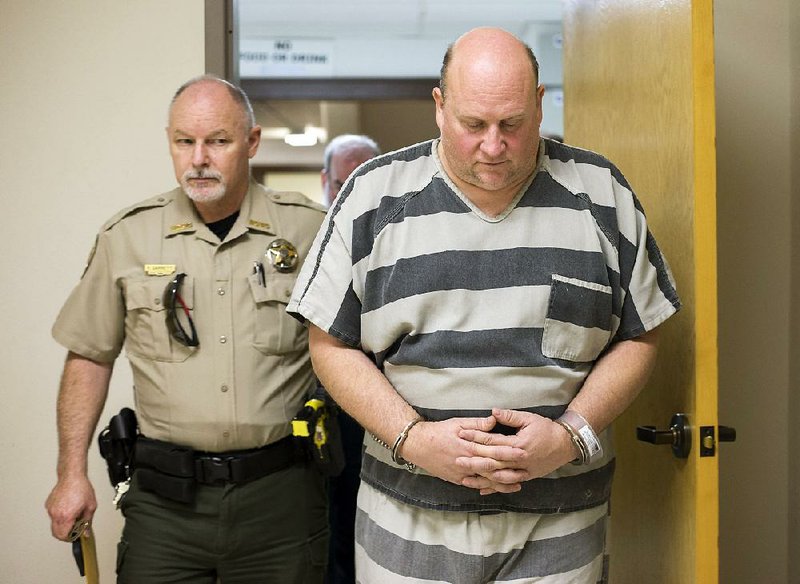 A Benton County sheriff’s office deputy escorts Grant Hardin to his bond hearing on Feb. 24, 2017, at the Benton County Courthouse in Bentonville. Hardin had been arrested in the death of James Appleton.

Grant Hardin freely admitted that he walked up to a man sitting in a pickup and shot him in the head.

His guilty plea in the 2017 murder led to Hardin being charged in a 20-year-old rape case. The former police officer has pleaded innocent in the sexual assault case. His jury trial is scheduled to begin Feb. 11 with a pretrial hearing scheduled for Friday.

Benton County prosecutors say Hardin was 28 years old in November 1997 when he raped a Rogers schoolteacher who was at work on a Sunday morning preparing the week's lesson while congregants of a church worshipped in the cafeteria.

His career in law enforcement appeared to be over by the beginning of 1997. He had been fired from the Fayetteville Police Department, had quit the Huntsville department, and had been allowed to resign from the Eureka Springs department in October 1996 after he was accused of falsifying a report, according to personnel files from the departments.

The Frank Tillery Elementary School teacher said she arrived at the school a little before 9 a.m. and went to the restroom in the teacher's lounge about 11:30 a.m. When she left the lounge, a man holding a gun forced her back inside, she said. He raped her and fled, according to police reports.

He wore a stocking cap and sunglasses but no shoes; took care not to touch any surfaces; covered her face with her pants at times; and took her underwear. Police suspected at the time that the man may have had law enforcement training.

The rapist was careful, but he left something behind. Her rapist seemed surprised, the teacher recalled, when he ejaculated. She used her hand to wipe his semen off her leg and onto her sweatshirt and T-shirt after he left.

The DNA from her clothing ties Hardin to the crime, prosecutors say.

Hardin, 50, pleaded guilty to first-degree murder in October 2017, admitting that he killed James Appleton. He has never given a reason for the slaying.

Appleton pulled into a parking lot on Gann Ridge Road in Gateway on Feb. 23, 2017, to talk with his co-worker and brother-in-law by cellphone. A passer-by saw the pickup and a white Chevrolet Malibu parked behind it.

The driver of the Malibu waved him around, the passer-by told police. He heard a bang when he was a few hundred yards away and saw the Malibu speeding toward him before turning onto a dirt road.

Hardin lived in his boyhood home on Gann Ridge Road. His wife, Linda, thought he was outside spreading grass seed at the time of the slaying.

"A car came flying down the road and stopped," Andrew Tillman recalled Appleton saying as they talked. "It must think I'm a policeman or something," Appleton reportedly said.

Appleton told Tillman the car was going around him. The next sound Tillman heard was like a slammed door, Tillman told police.

Hardin went home and took his wife and teenage daughter out to dinner. Linda Hardin told police that her husband didn't eat his salad. At one point he told her she'd be all right if something happened to him, Linda recalled. He said something like, "Just know I love you. God will take care of you," she said.

The passer-by told police that Hardin was driving the Malibu that had waved him around. He said he'd known Hardin all his life.

Hardin was sentenced to 30 years in prison and must serve 21 years before he is eligible for parole. Benton County Circuit Judge Robin Green questioned Hardin about his motive, but Hardin never gave a reason for killing Appleton.

Green ordered Hardin to provide a DNA sample to the state, standard procedure for all convicted felons.

Hardin had worked for four police agencies. He was fired from one, allowed to resign from one rather than be fired and resigned from two. He claimed the higher ground each time.

He entered law enforcement in 1990 with the Fayetteville Police Department. While working as a patrolman on the night shift, he said he discovered that other officers were taking confiscated alcohol, drug paraphernalia and other items for personal use. His working environment became hostile shortly after he reported the behavior, Hardin wrote in a letter in his personnel file. He was fired May 22, 1991.

The Huntsville Police Department hired Hardin in November 1991. He resigned by June 1992, saying in an employment application for the city of Eureka Springs that he was expected to treat some people unfairly.

He worked a couple of jobs -- cleanup crew at a manufacturing plant and bellhop at the Basin Park Hotel in Eureka Springs. He left those jobs over personal differences with upper management, he said in the application.

He worked several jobs within the Eureka Springs Police Department before becoming a full-time patrol officer there in May 1994.

He was reprimanded in March 1993 for failure to attend a mandatory meeting for officers and a subpoenaed court appearance. He was taken off patrol for a month in September for driving a patrol car the wrong way on a one-way street. In April 1995, he was in trouble for forgetting a mandatory meeting. He was issued another reprimand in September for over-aggressively pepper spraying a man during a traffic stop.

In October 1996, Hardin was accused of falsifying information in a report. A letter in his file says Hardin was allowed to resign in lieu of termination. He filed for unemployment benefits and was denied.

He returned to the private sector but kept a toe in law enforcement. County records show that Hardin served two terms as a constable in Benton County from 2009-10 and 2013-14. The position was unpaid and offered no expenses reimbursements.

"I still have to work full time, but I wanted to help my community. I thought I could get out and use the things I had learned as a police officer," Hardin was quoted as saying in a 2009 newspaper story about why he wanted to be elected constable.

Almost 20 years passed before he was a paid law enforcement officer again. He became police chief in Gateway in Benton County in 2016.

He resigned after four months, saying he needed to focus on family and education. He earned an associate's degree in criminal justice that year from Northwest Arkansas Community College.

"He was a good student, older and nontraditional," former instructor Jerry Rose said. "He had law enforcement experience and added to the discussions in class." Rose said he never saw Hardin display any signs of aggression or anger.

He wondered if Hardin's interest in law enforcement had ulterior motives. "He fooled a lot of people, including me," Rose said.

Hardin was working at the Northwest Arkansas Community Correction Center in Fayetteville at the time he was arrested for Appleton's murder, according to court documents.

The teacher's rape made front page news for days in 1997. Investigators collected hundreds of pieces of evidence and interviewed dozens of people. The state Crime Laboratory in Little Rock sent technicians. The Arkansas State Police joined the case, taking with them a newly developed FBI computer program to aid in the organization of evidence.

Rogers Police Chief Hayes Minor was one of the detectives called to the scene. He said many of the officers knew the victim, whose husband was a fellow Rogers officer.

Despite efforts that stretched the department's resources, the investigation went cold.

In 2003, Rogers police obtained a warrant for a "John Doe" suspect in the case based on the DNA evidence. A John Doe warrant is an arrest warrant for an individual whose name is not known. The statute of limitations for rape in Arkansas is six years, and the warrant was filed before time expired so the case could be prosecuted if a suspect was found.

The case was important to the department, Minor said. Once a year detectives would set aside at least a week to concentrate on solving it, he said.

Ron Largent, a retired Rogers police officer who once headed the criminal investigation division, said detectives often reviewed the case in hopes of solving it. He retired in July 2013.

"That was one of the cases that bothered me when I retired, and it had not been solved," he said.