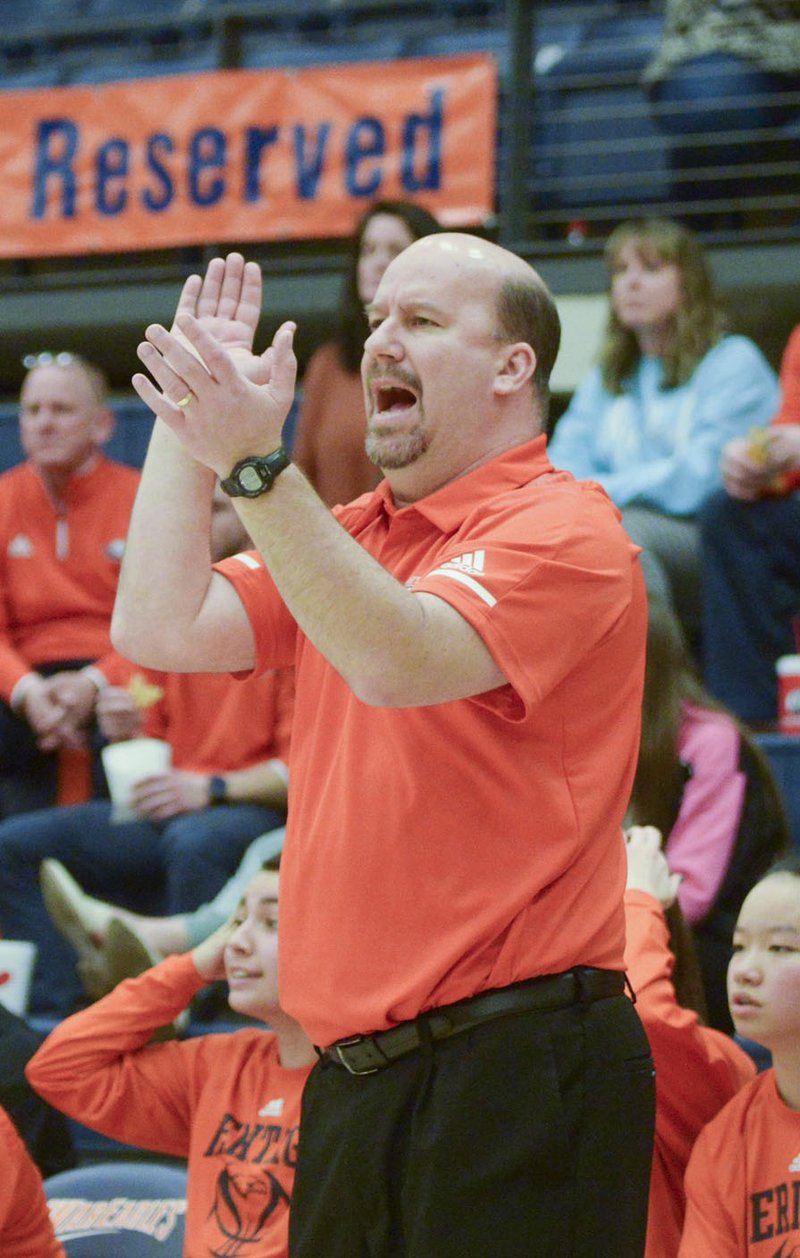 ROGERS -- Rogers Heritage coach Scott Moore pumped his fist as he looked toward the home bleachers.

The Lady War Eagles jumped up and down liked they'd just won a championship.

But there were no championships at stake for Heritage on Friday. Far from it.

Heritage was celebrating its first conference win after defeating Springdale High 62-60 at War Eagle Arena. It was quite an effort by the Lady War Eagles, who had lost 34 of their last 35 conference games.

"We had a great week of practice this week and I thought we kept building," Moore said. "We had a good bounce in our step. So, I had a really good feeling we could come out and give Springdale a run."

Maddie Lynge scored 17 of her 25 points in the first half to lead Rogers Heritage (5-15, 1-7). She had plenty of offensive help in the second half from Lanee Knight, who finished with 18 points, and Alex Pabon, who contributed 12.

The War Eagles needed every basket to hold off Springdale (11-8, 4-4) and Marquesha Davis, who finished with 37 points.

"Maddie did a great job in the first half, then they switched and put Davis on her," Moore said. "That opened up some things for Lanee and Alex, who had been out for a couple of weeks, she had a great second half after struggling the first half."

Rogers Heritage took control at the outset behind Lynge, who made three of her five 3-pointers in the first half. Heritage led by as much as nine points before Davis, the University of Arkansas signee, began to heat up. Davis continued scoring and tied the game with a driving layup to begin the fourth quarter.

But Heritage kept its composure and regained a 59-52 lead following baskets by Knight and Pabon.

"We're trying to get to the playoffs and we at least need four wins," Moore said. "We got No. 1 tonight and that gives us a lot of confidence."

It was almost all Bentonville in the second half. Natalie Smith and Dauda combined for eight quick points and the Lady Tigers were off and running, racing to a 41-20 lead on Bella Irlenborn's inside shot to cap the 19-0 surge.

"I think our kids just relaxed and started hitting some shots in the third quarter," Lady Tigers coach Tom Halbmaier said. "We did a good job of passing the ball and sharing the ball and finding the open man."

Avery Hughes, Smith and Dauda all scored 10 points for Bentonville and Irlenborn added 9.

Starks led Har-Ber with nine points, all in the first half, and Caylan Koons added seven.

Fayetteville improved on its perfect conference record after beating Bentonville West, 60-34, behind stingy defense and 31 combined points from Sasha Goforth and Coriah Beck.

Fayetteville held West scoreless for almost the entire second quarter before Kelsi Mahone knocked down a 3-pointer with 15 seconds left in the quarter. It was a stark contrast for a Lady Wolverines' team that led for the first few minutes of the game.

"Bentonville West came out hot, they made some shots, they executed well," Fayetteville coach Vic Rimmer said. "Our kids adjusted really well. We played more physical in the second quarter and didn't allow them to get where they wanted to be or get the shots they wanted."

Rimmer was impressed with his point guard Claudia Bridges' offensive performance after she knocked down three 3-pointers on the night. Bridges, Fayetteville's leading 3-pointer shooter by percentage, usually doesn't look to score, so Rimmer was pleased to see her start, he said.

Mahone led the Lady Wolverines with 14 points as the main option on offense for West. Shania Wilson started off the game strong for West, scoring the team's first seven points, but foul trouble took her out of the game early, and she struggled to find the basket after she came back.

Junior London Hatch sank 5 of 6 free throws in the final 1:23 of overtime Friday night, and finished with a game-high 17 to lead the Rogers girls to a 6A West Conference victory over Van Buren.

"We made some things hard on ourselves at times tonight, but I'm so proud of our girls for making adjustments and making some big shots down the stretch," Rogers coach Preston Early said. "We had prepared our kids for a game like this for the past three days, because you know it's a possibility with two evenly matched teams. We answered, they answered."

Hatch sank a pair of 3-pointers in the first quarter, as the Lady Mounties jumped out to an early 21-12 lead. As a team, Rogers hit four from beyond the arc in the opening period and 11 for the game.

"I thought we shot it well tonight and were able to find some open looks," Early said.

Van Buren battled back in the second quarter with a 13-8 advantage. Rylee Ryan drilled a 3-pointer, then converted a layup to give the Lady Pointers their first lead, 33-32, with 5:13 left in the third quarter.

After Kaleigh Evans began the fourth quarter with a three from the wing to give Van Buren a 43-42 lead, Rogers went on a 9-0 run with three straight triples -- two from Kate McConnell and one from Hatch.

Van Buren finished regulation on a 12-2 run, tying it at 53-53 on Olivia Schnakenberg's short jumper with 12 seconds left.

Sophomore Nadayah Cates, playing in her first game since injuring her knee early in the season, hit a key 3-pointer in overtime, as the Lady Mounties took a 59-54 lead midway through the period and never looked back.

Cates finished with 13. McConnell and Gracie Carr had 11 each.

Emmalee Greebe paced Van Buren with a team-high 16. Schnakenberg had 13, and Lexi Miller finished with 11.