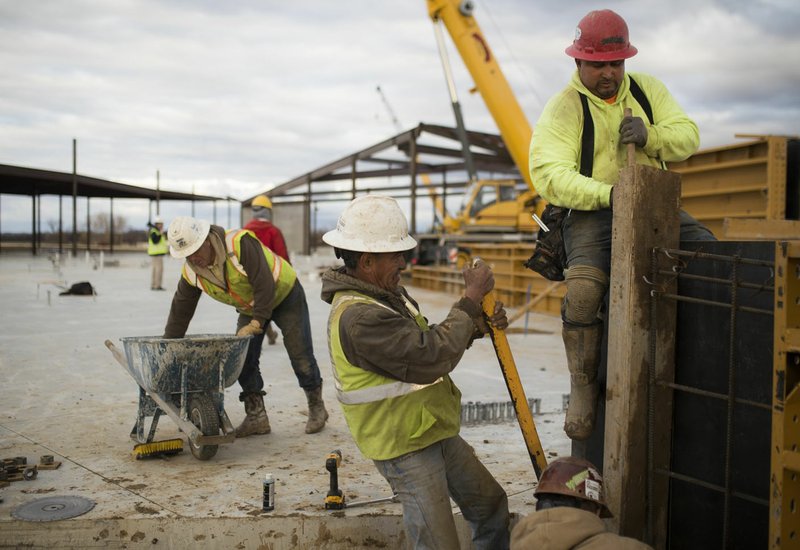 NWA Democrat-Gazette/CHARLIE KAIJO Construction workers Ramon Herndez, Mateo Carmona and Luis Recinos (from left) build a wall in December at the site of the new U.S. Marshals Museum in Fort Smith. The building is expected to be completed by September. A special election will be held in March to help finish the museum and exhibits.

FORT SMITH -- Even as they stressed their support of the U.S. Marshals Museum, members of a three-man panel attacked the proposed 1 percent sales tax that museum officials are asking residents to approve to raise $15.5 million to finish the museum.

Former state Sen. Frank Glidewell, Fort Smith City Director George Catsavis and attorney Joey McCutchen sat on a panel before about 75 people in an anti-tax meeting Thursday that was organized by a group called Citizens Against Unfair Taxation.

"I support the Marshals Museum," Catsavis said during the hourlong gathering. "Everyone here does. But when this issue of the tax came up, guess what? That raised a bunch of eyebrows. Nobody was expecting this, and people are worried about this."

Panelists said the tax would unfairly provide public money for a private entity. The museum wouldn't raise enough revenue to keep the doors open, they said, arguing that residents would be left to keep the museum open with an additional tax.

The tax also would add to the burden of residents already hard-pressed to pay their bills, panelists said. They said they received complaints from residents that their monthly utility bills total hundreds of dollars because of sewer rate increases passed by city directors to meet requirements of a federal sewer system consent decree.

The consent decree and other "white elephant" projects, such as the failed River Valley Sports Complex and the city's convention center that requires an annual $700,000 subsidy, have put trust in public officials in doubt and left too many questions about the museum unanswered to merit support for the tax, panelists said.

McCutchen asked those in attendance whom they thought officials would turn to for money if the museum opened but failed to raise enough to pay its bills.

"It's too big to fail," McCutchen said. "So, they are going to be asking us [residents] to come bail out the project again."

McCutchen said the museum already has received public money totaling nearly $6 million. Glidewell branded it "fake news" that he was a sponsor of $25 million in state funding.

The museum website has a copy of Act 893 of 2007, titled "An act to make an appropriation to the Department of Parks and Tourism for U.S. Marshal Museum in Fort Smith, Arkansas; and for other purposes." Glidewell, a Republican who served in the House from 2005 to 2011, was listed among the seven representatives and four state senators who sponsored the bill, which appropriated $25 million from the General Improvement Fund. Officials have since said the state only contributed about $2 million.

Fort Smith directors in December passed ordinances that set a March 12 special election to ask citizens to vote on whether to pay a nine-month 1 percent sales tax to raise the $15.5 million needed to install exhibits and complete the 50,000-square-foot building that is under construction on the banks of the Arkansas River.

The U.S. Marshals Service named Fort Smith in 2007 as the site for its national museum because of the city's deep connection with the service.

The museum has worked since 2009 to raise funds for the $50 million project, working toward the scheduled opening date of Sept. 24, the 230th anniversary of the establishment by President George Washington of the nation's oldest federal law enforcement agency.

Museum Foundation President Jim Dunn has said fundraising sources have dried up, with the last major contribution request collapsing last summer. The failure of that request forced museum officials to seek help from residents through the sales tax, he said.

McCutchen said he believes the museum can be completed without the sales tax through a Plan B, as he and others called it. One version of Plan B would be to scale back the museum to a size that officials could afford to build. Other alternatives would be to resume fundraising or take out a loan.

Dunn has said that if voters reject the sales tax, the only alternative would be to continue fundraising. It would be difficult to persuade large investors to donate to the museum if the Fort Smith community was not behind the project, he said.