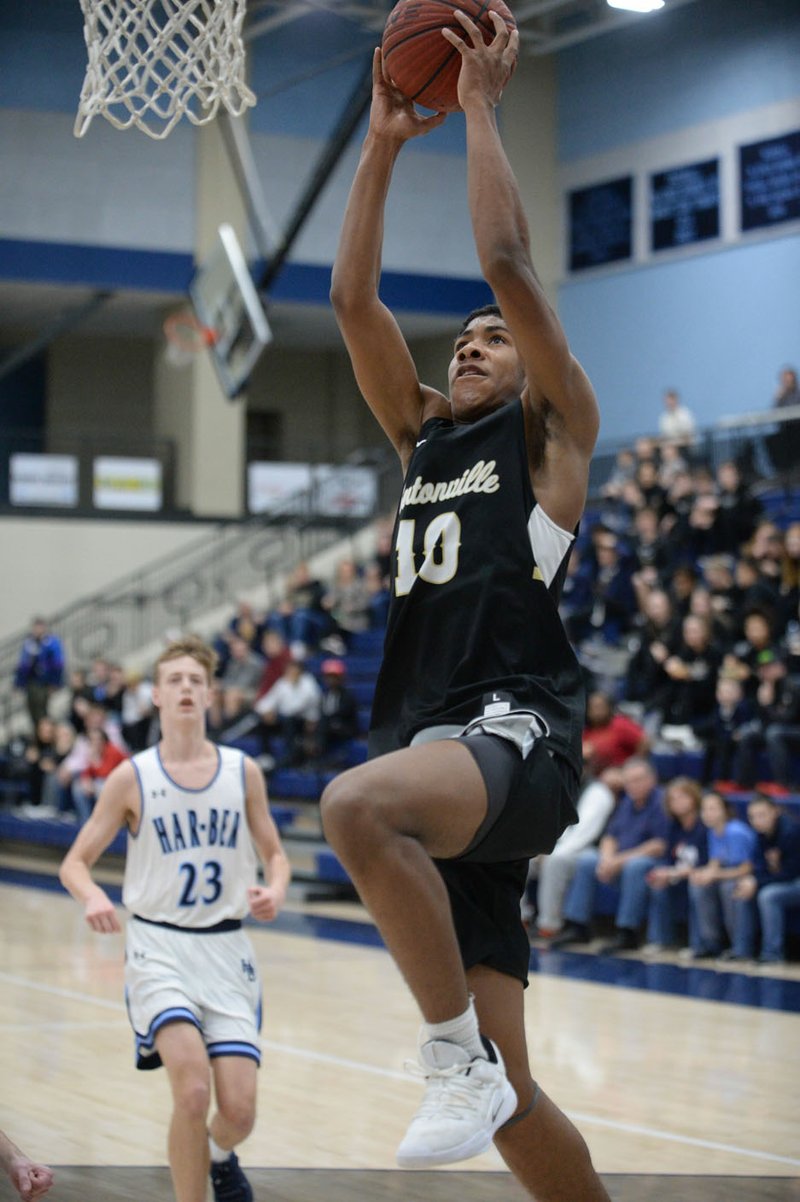 NWA Democrat-Gazette/ANDY SHUPE Bentonville's Connor Deffebaugh (10) reaches to dunk the ball in transition ahead of Springdale Har-Ber's Lawson Jenkins (23) Friday, Feb. 1, 2019, during the first half of play in Wildcat Arena in Springdale. Visit nwadg.com/photos to see more photographs from the games.

SPRINGDALE -- Bentonville High made the plays it had to make down the stretch to claim a 64-60 win at Springdale Har-Ber on Friday as the second half of 6A-West Conference action got started.

"I thought they played really well in the second half," Bentonville coach Dick Rippee said of Har-Ber. "They made some big shots. I thought our defense was really good in the first half, but in the second half (Lawson) Jenkins got on a roll. He's a game-changer, and (Nick) Buchanan is a handful."

Bentonville led by double-figures in the first half as Brayden Freeman scored 15 of his 24 points and Deffebaugh added 11 to help the Tigers to a 35-24 halftime lead. Bentonville's Sawyer Price hit a 3-pointer at the halftime buzzer for the 11-point lead.

Har-Ber (7-11, 3-5), which has played both Fayetteville and Bentonville down to the wire in back-to-back games, got a pair of 3-pointers from Jenkins and Cole Bishop to open the third quarter to pull the Wildcats within 35-30, and the Wildcats were able to stay within striking distance.

Jenkins, who scored 13 points, hit 3-pointers on successive offensive possessions for the Wildcats, the last coming with under a minute left in the third quarter to pull Har-Ber within 46-41 heading into the fourth.

Bishop got the Wildcats even closer when he drained a 3-pointer with 6:49 left that made it 48-45, but Bentonville had an answer as Freeman scored inside and Thane Spencer hit a floater in the lane to extend the Tigers' lead back to 52-45.

Then Buchanan took over the game. The junior guard attacked the Bentonville defense with slashing drives to the rim and hit a pair of three-point plays, then a 3-pointer from the top of the key that tied the score at 54-54 with 4:35 left.

The Tigers scored the next five points as Freeman hit a long jumper and Simmons knocked down a 3-pointer and Bentonville was able to clinch the game late.

"Anytime you can go on the road and get a win in this conference, it's huge," Rippee said. "I thought Connor did a great job of leading the team tonight. He was vocal and this was just a great win for our team."

Deffebaugh finished with 21 points for the Tigers and Simmons added 10.

Buchanan scored a game-high 25 for Har-Ber, including 12 in the fourth quarter.

Heritage trailed 30-20 before Kimball made a 3-pointer to begin a 15-0 surge that put the War Eagles ahead 35-30 midway through the fourth quarter. Furuseth also contributed a key 3-pointer for Heritage (8-12, 3-5) before Springdale finally stopped the streak on a free throw from Vinny Mason.

"Defensively, we got some more discipline and quit chasing things around," Olson said. "Credit Logan Clines for playing the top of our defense. He did an outstanding job, which created some turnovers and breakaways."

With three starters out for most of the game because of foul trouble, a young Fayetteville team turned to Collin Cooper to keep his team in the game, and the senior did not disappoint as he hit clutch shot after clutch shot in the second half of Friday's game.

"That's just the leadership part of him. That's what I told him as he was walking off the court when I took him out late," Fayetteville coach Kyle Adams said. "It's not the points -- we know he can score the basketball -- it's the leadership and timing of when those points come."

On back-to-back possessions in the third quarter, Cooper extended Fayetteville's lead to six points, which at the time was the Bulldogs' largest lead of the night. He knocked down a 3-pointer to put his team up, then came back down and hit three straight free throws after being fouled behind the arc.

Cooper scored 15 of his game-high 20 points in the second half to lead the Bulldogs to the win. The win keeps Fayetteville perfect in conference play, improving to 8-0.

West, which played without suspended coach Greg White, got good production from Dawson Bailey and Jonas Higson, who each had eight points. Everett Constantini hit a huge 3-pointer in the third quarter that closed the gap just four points before Cooper took over.

Rogers' ball-pressure defense gave Van Buren fits Friday night, as the Mounties (15-4, 6-2) held the Pointers in check during their 6A West Conference showdown.

After Van Buren (5-15, 1-7) took an 8-6 lead late in the first quarter, Rogers' Drew Miller tied the score with a layup. The Mounties then began the second quarter on 12-2 run, including a pair of 3-pointers from senior Will Voigt.

"We just came in focused and trying to bounce back from a week layoff, and trying to improve on some things," Rogers coach Lamont Frazier said. "Defensively we picked up the pressure. Our ball-pressure picked up and we were able to make some things happen.

Rogers outscored Van Buren 15-6 in the second, as Will Liddell's three at the buzzer sent the Mounties into the intermission with a 23-14 lead.

Another three from Liddell extended the Rogers lead to 15 with 3:53 to play in the third. Liddell ended the quarter with a slashing layup on a nifty pass from Miller, putting the Mounties up, 38-21.

Van Buren sophomore Gary Phillips tried to get the Pointers back into it with strong drives to the basket, converting two steals in the fourth, and finishing with a team-high 12 points.