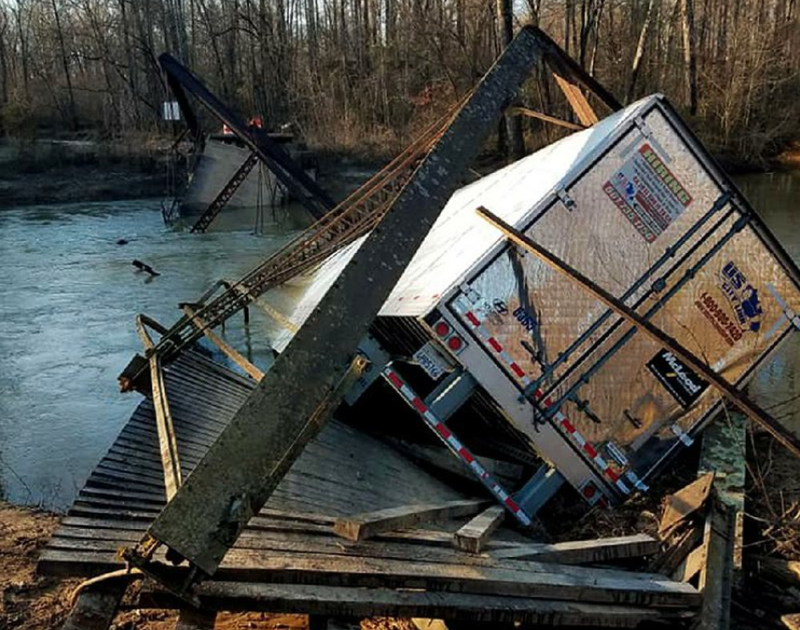 An 18-wheeler rests on parts of the collapsed Dale Bend bridge over the Petit Jean River near Ola on Thursday in Yell County.

A California man said his GPS led him down a one-lane dirt road in rural Yell County, where the weight of his 18-wheeler collapsed a historic bridge over the Petit Jean River on Wednesday night.

Harjinder Singh, 35, of Corona, Calif., was ticketed for driving a truck that was 64,000 pounds too heavy for the bridge, said the dispatch supervisor at the Yell County sheriff's office, who didn't want her name in the newspaper.

"GPS was wrong," Singh told a reporter. "I was sleeping."

He then hung up. Singh apparently meant he was sleeping when the reporter called on Thursday afternoon, not while driving over the bridge.

The dispatch supervisor said Singh had driven about 4 miles down Dale Bend Road before he got to the bridge, which is about 3 miles north of Ola as the crow flies.

"When he fully committed to Dale Bend Road, he couldn't have turned around," said Jeff Gilkey, the director of the Yell County Office of Emergency Management.

If Singh had crossed the bridge, he would have encountered one foot of water for the next 4 miles because the road was flooded, said Gilkey.

A sign before reaching the bridge notes that the weight limit is 6 tons.

"He neglected to stop and continued on and with the weight of the truck, that bridge just collapsed," Gilkey said. "He was dedicated to his GPS, I'll say that."

Gilkey said the bridge is in an Arkansas Game and Fish management area. He said the bridge isn't used much for commuting. It's mostly used by hunters, fishermen and photographers who venture into the woods there. Sometimes people would take wedding pictures on the bridge, he said.

According to the Arkansas Department of Transportation, an average of 20 vehicles per day crossed the bridge.

The bridge was last inspected by the Transportation Department on June 25. It was listed as having "fracture critical detail."

"Fracture critical means if one part goes all of it goes," said Danny Straessle, a spokesman for the agency.

Bridges on county roads belong to the counties, but the Transportation Department still inspects them, Straessle said. Apparently, the Dale Bend bridge was safe to use when it was last inspected, he said. Singh's truck was just way too heavy for the old bridge.

Straessle said truckers following GPS have had problems on Arkansas highways, too, particularly in Newton County, where they sometimes fail to make the curve on Arkansas 43 after coming down a steep hill heading south into Ponca.

"GPS doesn't take into consideration the size and weight of the vehicle," said Straessle. "All it's doing is showing the shortest distance between two points, and that can be detrimental to commercial and passenger vehicles."

Gilkey said the truck has been slowly sinking since falling into the river about 8 p.m. Wednesday. He said the tractor section was completely submerged on Thursday afternoon and the trailer was about half submerged. Gilkey said the river is about 20 feet deep at the bridge.

Gilkey said Singh had picked up a load of chicken for "human consumption" from Wayne Farms, a processing facility in Danville. Gilkey said he didn't know where Singh was trying to go with his cargo.

Gilkey said the trucking company was U.S. Citilink Corp. of Bakersfield, Calif. He said an insurance investigator with the company was at the site on Thursday trying to figure out how to get the truck out of the river.

Gilkey said officials plan to bring in a crane that can lift 250 tons, but first they have to build a pad so the support vehicles can park nearby.

He said it will probably cost $1 million to replace the bridge.

That wasn't a problem once Singh got to the sheriff's office in Danville.

"Actually, there's a gas station right across the street from our office, and they speak that," said the dispatch supervisor.

The Dale Bend bridge was constructed in 1930 by Vincennes Bridge Co. of Indiana. It was added to the National Register of Historic Places in 2010.

It was in good condition at that time, according to the nomination form.

It was one of only three Pratt through-truss bridges in Yell County.

"The Petit Jean River bridge consists of a single Pratt through truss span with seven panels, measuring 119 feet," according to the nomination. "The total structure is 159 feet and is comprised entirely of steel and concrete. The overall width of the bridge is 12 feet with the roadway allowing one-lane traffic. The deck surface is concrete. The bridge is supported by two concrete pillars on each side of the river." 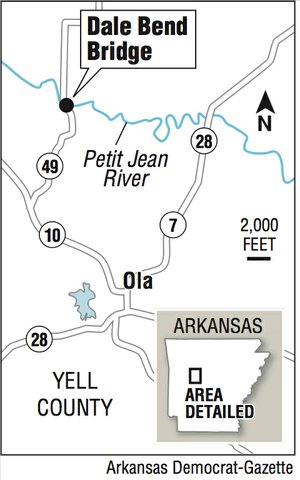