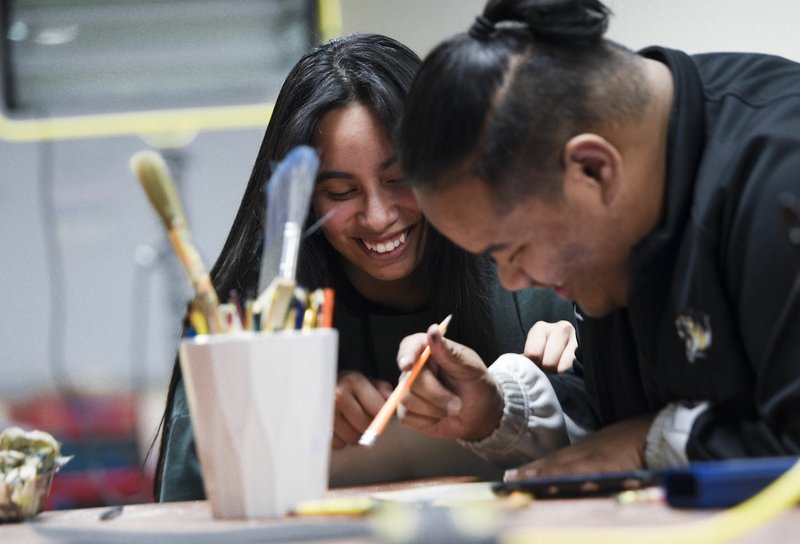 Joyce Hitchfield would get in trouble for drawing on the walls of her home as a child.

Hitchfield, 18, emigrated to the United States from the Marshall Islands when she was 4, she said.

She's been making art more intentionally as she grows older and is learning to sketch and paint with watercolors.

The Teen Action and Support Center featured some of Hitchfield's untitled sketches that were inspired by stock photos of body images in an art show this month in Springdale. Her biggest pieces in the show were no larger than 14-by-13.5-inches, she said.

"I felt like with drawing body parts I'd be able to express things," Hitchfield said. "With words you can say things, but with body parts, I feel like there's more to it."

The images were meant to evoke feelings of vulnerability and strength, she said.

"I felt more secure within myself drawing, sketching and looking at all these images," Hitchfield said.

Hitchfield is a senior at Springdale High School and is discovering she's one of a just a few members of the local Marshallese community who are exploring the American concept of art.

"There's no real word for 'art,'" in the Marshallese language, Hitchfield said.

The most comparable terms in Marshallese are "pija" or "jiña," which are defined as "drawing," said Melisa Laelan, chief executive director and founder of the Arkansas Coalition of Marshallese.

The coalition's goal is to improve the quality of life for the Marshallese by focusing on the pillars of education, health, cultural integrity and leadership.

What American consumers would consider art to be displayed, appreciated and potentially sold, the Marshallese traditionally view as something to do for the enjoyment of creating, she said.

The resources for traditional craft-making are almost nonexistent for the 12,000-14,000 Marshallese who live in Northwest Arkansas, said Sheldon Riklon, an associate professor at the University of Arkansas for Medical Sciences College of Medicine in Fayetteville.

Marshallese handicrafts are woven using pandanus leaves, split and bleached young coconut palm leaves, the midrib of the coconut frond, hibiscus fibers and shells, according to the Ministry of Resources and Development with the Republic of the Marshall Islands.

The teen's family has been supportive of her trying accessible art concepts, she said. She appreciates the concerns of community elders who worry that younger generations will lose touch with their heritage.

"There's a wall in front of them and it holds them," Hitchfield said. "A lot of us younger generations, we don't like that and are trying to overcome it."

Investing in diverse communities is a national trend that's beginning to affect Northwest Arkansas, said Allyson Esposito, executive director of a regional arts service organization launched by the Northwest Arkansas Council. The group does not yet have a name.

The organization advocates for art and creative people in the region, Esposito said.

The investment in the arts nationally has historically gone to large organizations, rather than smaller, insular communities of color, she said. That paradigm is beginning to shift as people recognize the value of investing in the advancement and leadership within diverse communities, she said.

"I'm very excited about that," she said. "There's a huge opportunity to do that here."

Increasing diversity in the arts is good business for Northwest Arkansas, she said.

Nelson Peacock, president and CEO of the council, said the council is working to promote an inclusive environment. The nonprofit works to with partners to advance the region's quality of life, improve the workforce, create job opportunities and upgrade infrastructure.

"People from diverse backgrounds enrich communities with innovative ideas and creative solutions to difficult problems, and their unique experiences enhance the talent pool of workforce available to our regional companies," Peacock said.

The arts enhance the quality of life and serve as an economic driver for the region, he said. The council commissioned a study conducted by the Americans for the Arts to analyze the economic impact of nonprofit arts and cultural activities in the region, Peacock said.

The study reported $131.2 million in total economic activity annually in Northwest Arkansas, he said. Spending included $67.5 million by nonprofit arts and cultural organizations and $63.7 million in event-related spending by their audiences. 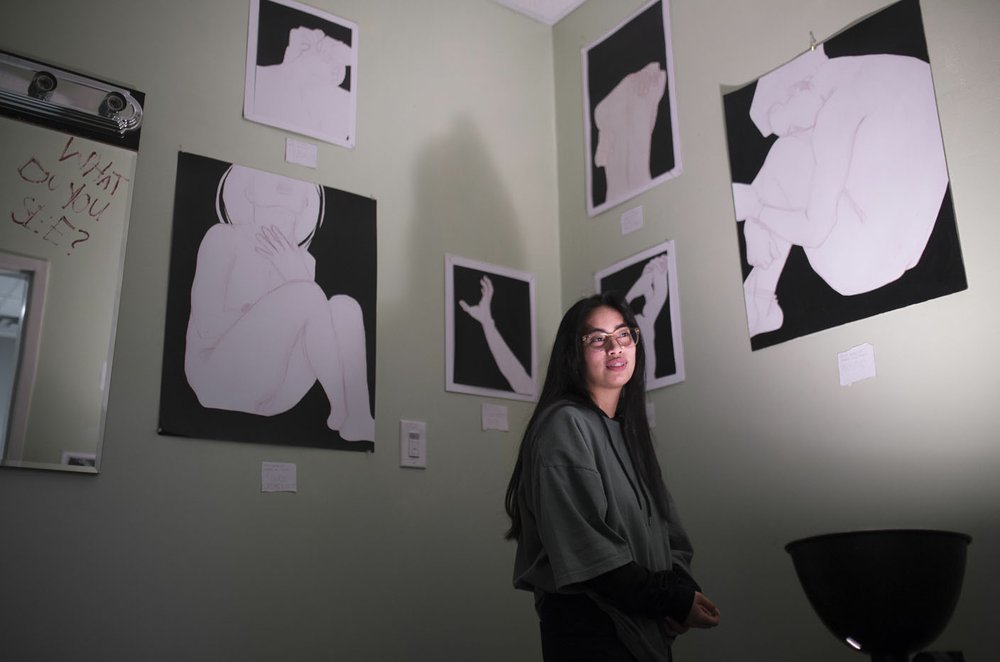 "There's already wonderful leaders in our communities of color that maybe just need additional platforms, additional resources, additional visibility and many of them are creative people," she said.

Developing those leaders starts with young people such as Hitchfield, who want to make changes within the Marshallese community, Laelan said.

"We want them to understand that we need future leaders," Laelan said. "We're empowering them to be just that."

Hitchfield wants to be a part of the changes art can bring.

"I plan on putting up art pieces on climate change and global warming," Hitchfield said. "I want to express how I feel about it and how deeply sad I am about everything that's going on."

As climate change causes sea levels to rise and weather patterns to shift, the Marshall Islands face flooding, heat stress and drought that damages agriculture, livelihoods, homes and infrastructure, according to a brief by the International Organization for Migration.

"I hope the community will realize how big of an impact it is on our people," Hitchfield said. "I totally think art can create a big impact on people and change how they think." 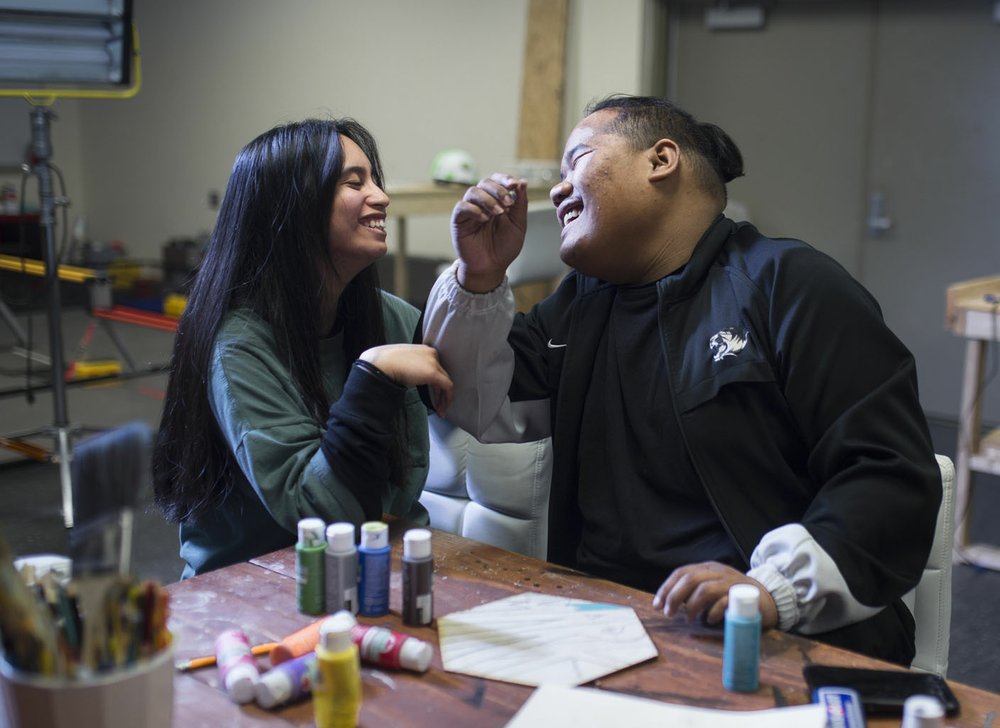 The Marshall Islands consist of two chains of 29 coral atolls, and are located north of the equator, between Hawaii and Australia. On each atoll there are a number of islands.

In 1947, the Marshall Islands became part of the Trust Territory of the Pacific Islands, created by the United Nations and then administered by the U.S. In 1946, the islands had a population of 52,000.

The U.S. conducted its largest nuclear detonation ever, Castle Bravo, at Bikini Atoll on March 1, 1954. This was part of Operation Castle, a series of thermonuclear tests. Bravo was over 1,000 more times powerful than “Little Boy.”

Bravo used a device called “Shrimp” which used lithium deuteride as its fuel. Bravo was the first test of a deliverable hydrogen bomb.

• Erika Nelson and Kasey Hodges, who are attempting to overcome barriers that can prevent some disabled people from succeeding as working artists.

• Danielle Hatch, a woman who’s attempting to find success amid the societal expectations that exist for her gender.

• Jody Travis Thompson, who is addressing challenges and diversity within the LGBTQ+ community.

Editor’s Note: This is the first in a series of articles about diversity in the visual arts in Northwest Arkansas.