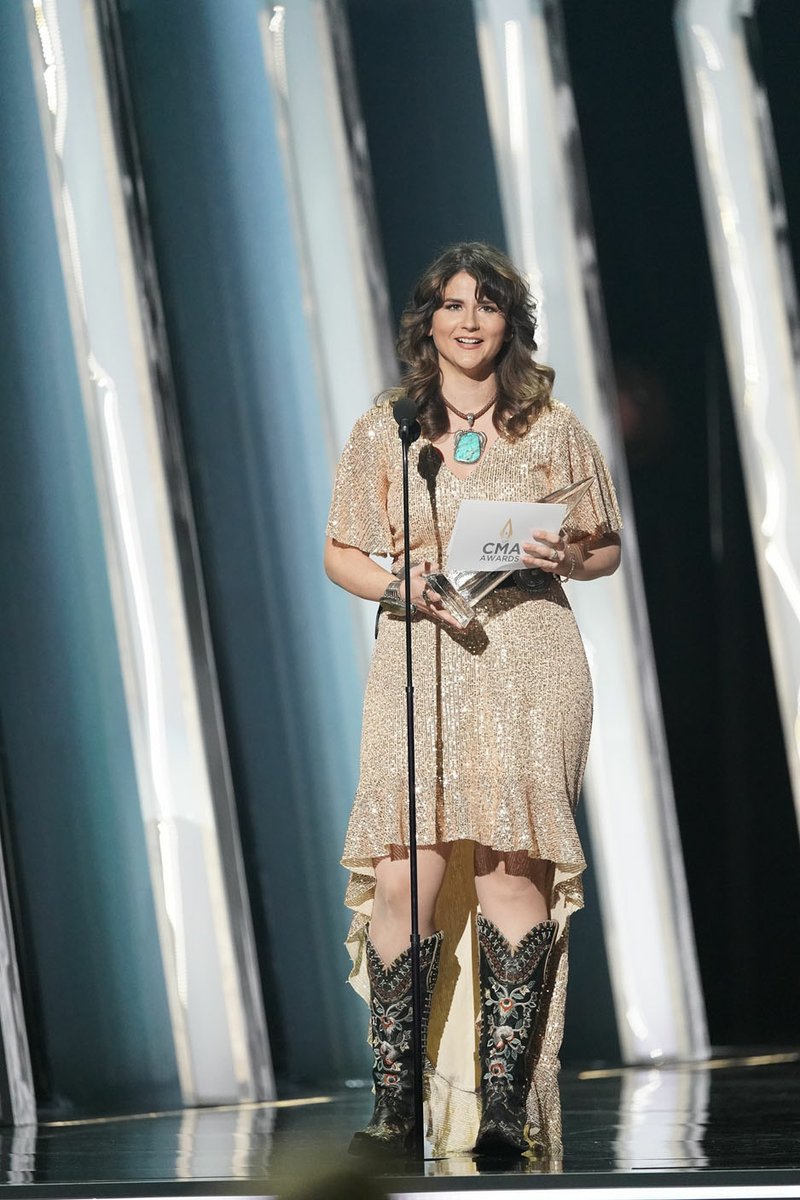 Courtesy Photo Springdale native and fiddling powerhouse Jenee Fleenor accepts her award for Musician of the Year at the 53rd annual Country Music Association Awards ceremony in November. Fleenor became the first woman to be nominated, and subsequently win, the award.

If the Cate Brothers are the iconic past of Northwest Arkansas music, Fleenor is one of the symbols of its current success and glowing future.

Though she's been a bit of a celebrity here in Arkansas since joining local band Outside the Lines at the ripe old age of 16, the Springdale native has been getting a lot of national attention recently as the country music industry is finally beginning to recognize what her peers already knew: Fleenor is a true and sensational talent.

In March, the fiddler was nominated for an Academy of Country Music Award (ACMA) for Specialty Instrument Player of the Year. Less than six months later, she nabbed a Country Music Association (CMA) award nomination for Musician of the Year.

An aside -- if it seems confusing why there are two separate organizations handing out such similar-sounding awards, all you need to know is both are official industry ceremonies dating back to the late 1960s, with different network affiliations and hometowns. Nashville-based CMA was actually founded first, in 1958, but did not begin bestowing awards until the year after the Las Vegas-located ACM handed out its first accolade in 1966. Voting members of both organizations elect the respective nominees.

Fleenor's nominations for both ceremonies in 2019 are particularly notable because she made history with both. In March, Fleenor was the only woman nominated in the ACMA studio musicians field -- comprising six categories and 32 nominee slots -- and the first woman ever nominated for the specific award of Specialty Instrument Player of the Year.

"In years past, I was in bed before the show even ended," Fleenor reveals with a laugh. The fiddler and songwriter has spent the last several years performing with country superstar Blake Shelton's band, and occasionally will work with little names on the side -- like Aerosmith's Steven Tyler.

She's attended the CMAs before to play with Shelton -- then, she was able to leave after their performance, -- but this year's three-hour ceremony was completely different for the musician.

"I was up at 5 a.m. to be ready to be in makeup at 8. I played with Dolly [Parton] and Blake that morning with a call time around 10 or 10:30 a.m.," she recounts. "I had actually never played that fiddle solo with Blake until that morning -- we ran through maybe two times before playing it live."

After a wardrobe change, Fleenor and her husband walked the red carpet around 4:30 p.m., which she'd never done before, and her award was announced during the 6 o'clock hour.

"It was the most amazing moment," Fleenor recalls. "A lot of the artists hadn't even moved into that room yet -- Blake and Gwen [Stefani, Shelton's girlfriend] were still in their limo, and they Instagrammed about it. I just lost it. It was everything I'd ever dreamed of in that moment."

Several outfit changes, a couple of performances, an on-stage introduction by powerhouse Carrie Underwood and a walk to the press room later -- escorted by Shelton -- Fleenor's whirlwind day of being a CMA nominee and now winner was over. Only a few days after the affair, she was back to work. Fleenor performs in the house band for NBC's singing competition show "The Voice," where Shelton and Stefani are both judges. The show is taped in California, so Fleenor does a lot of flying back and forth from her Nashville home during the competition months.

She's also played on 10 different albums in recent months and written and recorded two songs of her own this year, on top of touring with Shelton, and occasionally performing by personal invitation with Steven Tyler. So while she'd perhaps like to record her own full album at some point, Fleenor admits she would never stop doing all the things she's got on her plate at the moment.

"I just look at my husband sometimes and say, 'Is this real? Is this real?'" she says, awestruck.

And now she's got a sleek hand-blown crystal trophy to tangibly tell her this is all real.

Had the timing been different, Fleenor might have been discovered thanks to the House of Songs. But the organization is in just its second year in Northwest Arkansas.

According to an email exchange with Troy Campbell, the HOS founder, "the original goal [in Northwest Arkansas] was to determine if The House of Songs could create a bridge between local artists and international artists by focusing on the unique cultural mix in the Ozarks. Each year since we've been able to increase programming, which now includes export and local co-writing.

"We are increasing partnerships in our programming and hope to export more Northwest Arkansas talent to the world by having international and national touring artists come here for residencies and recording sessions," Campbell continues. "One event that will certainly be a highlight of the new year will be our 2020 Songwriter Summit. The House of Songs will host our first Songwriter Summit of 2020 in Bentonville, bringing together musicians from Austin, Northwest Arkansas and the United Kingdom to live, write and collaborate together at The House of Songs. These artists will perform their new collaborative works in the region, record and continue their journey on to Folk Alliance International in New Orleans and AmericanaFest UK in London."

"Our goal here, as it is in Austin and New York City, is to create change and facilitate platforms that artists and audiences can both enjoy," Campbell says. "We hope to create more collaborations between local Northwest Arkansas artists and international and national touring acts, which we feel will create stronger connections for Northwest Arkansas artists around the world."

And on a final, symphonic note, it's been a year of great success for the Fort Smith Symphony. The Florence Price Symphony No. 4, recorded in May 2018 by the Fort Smith Symphony under the baton of music director John Jeter and released in January 2019 on the Naxos label, made the list of the 25 "Best Classical Music Tracks of 2019," according to The New York Times. Also included were recordings by the Orchestre Philharmonique de Strasbourg, the Pittsburgh Symphony Orchestra, the San Francisco Symphony, the Los Angeles Philharmonic -- well, you get the idea!

But that's not the Fort Smith Symphony's only year-end accolade: WQXR, New York City's Classical Public Radio Station, listed the Florence Price recording in its best classical recording list for 2019. And the Florence Price album made the short list of Zoe Madonna and Jeremy Eichler's top 10 classical albums of 2019 in The Boston Globe.

"The Florence Price recording has received major national and international press since its release, and we are thrilled that this has continued throughout the year," says Jeter. "This sort of recognition is wonderful for our city, our region and the state. We thank Naxos for allowing us to bring this wonderful musical heritage of Arkansas to the world stage."

Jeter says in 2020 "there are plans for more recordings but nothing officially scheduled." The Fort Smith Symphony is certainly worth adding to your must-see list for next year. 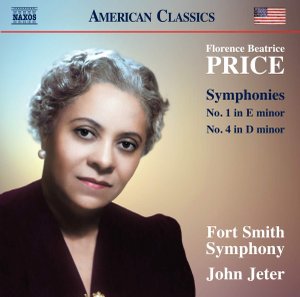 Courtesy Photo "Florence Price's music is romantic, lyrical, soulful and beautiful," says John Jeter, music director of the Fort Smith Symphony. "She was the first African-American female composer to have a symphony performed by a major American orchestra. She is considered the most prominent, historically significant concert composer of her race and gender in American music history. The Fort Smith Symphony will be the first orchestra to ever record her complete cycle of four symphonies. This is a very special and historic musical event for our city, state and our country!"