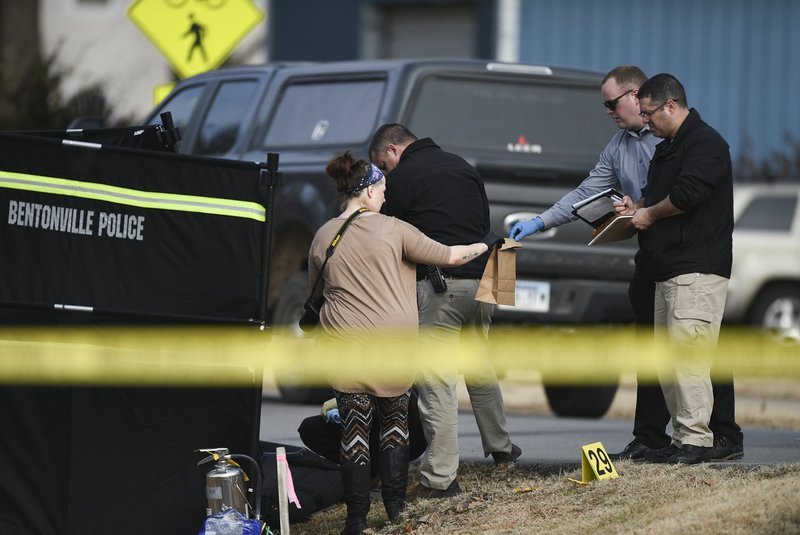 NWA Democrat-Gazette/CHARLIE KAIJO Officers collect evidence Thursday following a stabbing near an apartment complex on 502 S.E. B St. in Bentonville.

BENTONVILLE -- A Rogers man was arrested after he fled the scene of a fatal stabbing near downtown Thursday morning.

Police were called at 9:05 a.m. regarding a man with multiple stab wounds, according to a police news release. Police found the dead man in a grassy area near 502 S.E. B St., according to the release.

The victim was identified as Keundra Allen, 25, of Little Rock, according to the release. The suspect fled on foot and was later arrested by Arkansas State Police, according to police.

Bill Sadler with Arkansas State Police said, "A wanted individual was turned over to the appropriate jurisdiction with a warrant." Ballett had not been booked into the Benton County Jail as of 4:15 p.m.

Benton County Coroner Daniel Oxford was at the crime scene from about from 11:30 a.m. to 12:13 p.m. Oxford said the body was found lying on the ground face up. The body will be sent to the state medical examiner's office in Little Rock, Oxford said.

Police cordoned off the area around the crime scene with yellow tape. A part of the downtown trail was closed because police tape crossed a section of it. Yellow police tape also ran from Southeast A Street near the library through the back yards of a group of apartments to near the crime scene on Southeast B Street.

A few onlookers gathered near the intersection of Southeast B and Fourth streets where police tape was draped across B Street. A few people asked what was happening, but then quickly moved on.

The investigation is ongoing, according to Bentonville police.