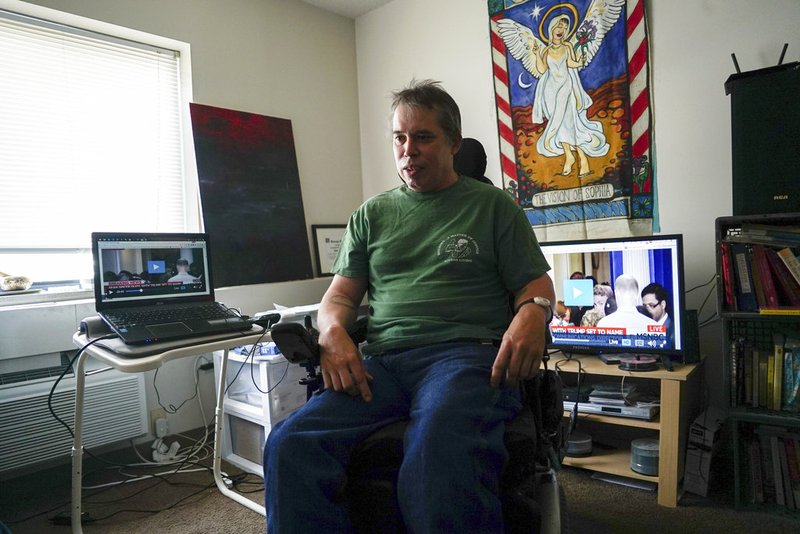 Darrell Price sits in his power wheelchair in his apartment in Cleveland In this July 2017 file photo. Price relies on a Medicaid-funded assistant to help him get dressed, washed and fed. In Arkansas, such assistants are having their work hours reduced because state budgeting has not accounted for the increase in the minimum wage taking effect on Jan. 1.

About 2,800 disabled Arkansans face a reduction in the amount of home-based care they are allotted by the state Medicaid program because the state has yet to fully account for the minimum wage increase that takes effect Jan. 1.

Those facing the reduction receive care through the state's Independent Choices program. The program allows them to hire someone -- often a relative or friend -- to help them with daily tasks such as dressing and bathing.

The hours of care that the recipients receive each week depends on the outcome of an assessment designed to measure their needs. The hour allocations are then translated into a budget based on the $10.40 an hour that the state Medicaid program pays for the care.

The problem is that $10.40 covers not only the caregiver's wage but also unemployment and payroll taxes.

The state is increasing the Medicaid payment rate, but only by about 15 cents per hour, which won't be enough to make up for the minimum wage increase.

So the state is cutting recipients' allotted care hours. That way, the recipients can pay the caregivers the higher wage and still stay within the budgets that were calculated based on the Medicaid rate.

Carolyn Godfrey of Conway said the hourly wage she earns caring for a paraplegic relative will increase by about 26 cents, to the $10 minimum, but she will only be able to bill for slightly less than the 30 hours of care that she can now.

The net effect, she said, is that she will be paid about $1.60 less every two weeks.

"It's kind of a crazy thing to give somebody a raise and then cut their hours," said Godfrey, 46, who also has a second job as a customer service representative. "The whole point of minimum wage is to give people more money to live."

She already spends far more than 30 hours a week caring for the relative. The reduction means she won't be paid for as many of the hours.

The change takes effect with her next pay period, which starts on Christmas Eve.

"There's nothing good that's going to come out of this, except we're going to be getting a pay cut instead of a pay raise," Godfrey said.

Kevin De Liban, an attorney for Jonesboro-based Legal Aid of Arkansas, said the recipients he's spoken to are having their hours cut by about 5%, or about an hour and a half a week for a recipient who had been receiving 30 hours a week of care.

For some recipients, that will mean their caregivers will be paid for fewer of the hours they work. For others, such as those who don't have close relationships with the caregivers, it will mean fewer hours of care.

"Once again the burden falls upon the individuals and their family members to problem-solve while the state drags their feet," he said.

Jerry Sharum, director of the Department of Human Services' Division of Provider Services and Quality Assurance, said the Medicaid program's rate is set at 57.8% of what it pays for the same services when they are provided by care agencies instead of individuals.

That percentage is known as an "adjustment factor" and is meant to account for agencies' administrative costs.

The hourly rate is increasing by 15 cents on Jan. 1 because the state will increase what it pays agencies by 24 cents an hour, to $18.24 an hour. State lawmakers last week approved $3.4 million in one-time funds to pay for the increase to agencies through June 30.

But Sharum said that rate increase is just "provisional" and the state is continuing to review what the agency rate should be.

Changing the adjustment factor, he said, would require approval from the federal Centers for Medicare and Medicaid Services, which he said could take several months. The state hasn't started that process yet because it is still reviewing the agency rate, he said.

"We wouldn't want to make changes [to the adjustment factor] and then have to make changes again" once the rate review is complete, Human Services Department spokeswoman Amy Webb said.

In the meantime, Sharum said Palco, the company that handles the payments to individual caregivers on behalf of the state, has been meeting with recipients to explain the reduction in hours.

Recipients can avoid having their care hours cut by using an agency instead of an individual caregiver, he said.

The reduction in hours is the latest of a series of cuts in benefits for Medicaid recipients who receive in-home care.

In 2016, the state started using an assessment tool that reduced the maximum number of care hours most recipients could receive from about eight hours a day to about five a day.

This year, the state began using a new tool and increased the potential hours recipients could receive. But the tool also resulted in hundreds of recipients being told they no longer qualified for as much assistance.

De Liban said residents who choose to hire an individual caregiver, rather than an agency, save the state money because of the lower rate.

"Self-direction is what some people want," he said. "People shouldn't be discriminated against or prejudiced in any way because they're choosing to hire their own caregiver."