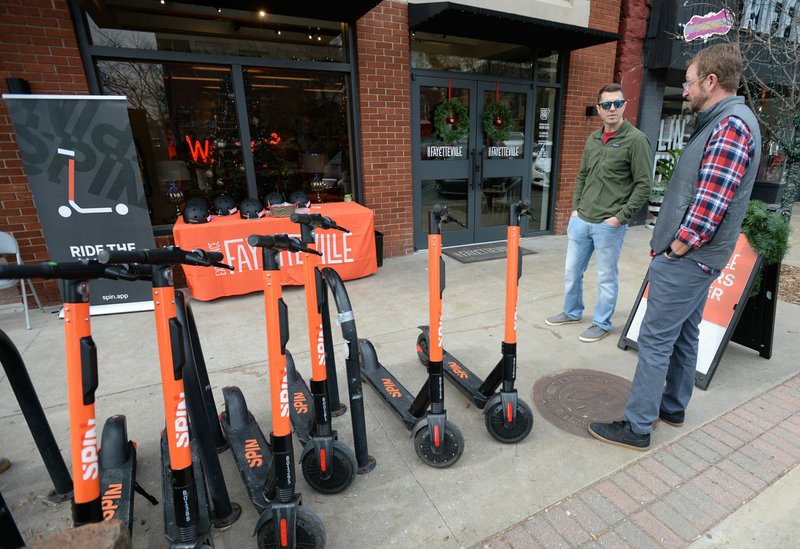 NWA Democrat-Gazette/ANDY SHUPE Daniel White (left), operations lead for Spin, speaks Friday with Brannon Pack, cycling coordinator for Experience Fayetteville, during a period of demonstration for the scooters introduced to the city Nov. 9.

FAYETTEVILLE -- Lots of people have been scooting around the city.

About 250 scooters from the company Spin have been on the city's streets since Nov. 9. The company reports more than 6,000 riders. Average ride distance is 1.6 miles.

For more information on the city’s scooter rideshare program, go to:

VeoRide, the city's bike-share program, had about 8,700 individual riders after a year of operation with about twice the number of vehicles.

Dane Eifling, bicycle programs coordinator for the city and the University of Arkansas, said the scooters' effortless nature -- riders don't have to pedal, after all -- could be contributing to the high number of riders.

"Lots of people own bikes," he said. "Very few own an e-scooter. So, if you want to ride one, you are for sure going to use the Spin."

Stefanie Corollo rode a scooter for the first time Dec. 11 along Block Avenue. Carollo said she was excited using a scooter as a reliable means of transportation. She lives within a few blocks of the downtown square.

The vehicle went a little faster than Carollo expected, she said. But she got the hang of it after a few minutes.

Carollo said Uber just launched around the time she graduated from the UA. Using a scooter to get from spots downtown to her home will cost less, she said. Carollo said she'd pay about $8 for an Uber ride, whereas a 10-minute scooter trip would cost $3.

"If I would've had this whenever I was a student, that would've been amazing," Carollo said.

Adopting a scooter program falls in line with the goals of the city's energy action plan. The plan outlines goals to reduce the number of cars with one person in them. The city also hopes to have fewer car miles traveled.

Exhaust from vehicles accounts for nearly 30% of the greenhouse gas emissions in the city, according to the plan. Greenhouse gases are a main contributor to climate change across the globe, the plan states.

The City Council this summer adopted rules and regulations for scooter companies and riders. Companies are allowed to deploy a maximum of 250 electric scooters apiece as part of the rideshare program, with the total number capped at 500. Private ownership of the scooters isn't regulated.

The scooters are battery-powered, with two wheels, a T-shaped handlebar and a floorboard. Riders unlock them through a mobile app. The user is asked to put $10 on an account. Unlocking the device costs $1, and 20 cents per minute after that. The devices have a maximum speed of 15 mph and can be ridden on roads, trails or sidewalks.

Spin was the first company approved through the city's permitting process. Companies have to have insurance, keep track of ridership and include "slow-ride" zones automatically slowing the scooters to 10 mph through pedestrian-heavy parts of town, among other requirements.

Daniel White with Spin said the ridership numbers are promising. Riders overall are adhering to proper etiquette by parking appropriately and following the rules of the road, he said.

The system is largely self-regulating, White said. People who have the app downloaded can report rogue scooters parked improperly. People who want to report an issue with a scooter can do so through the app. White's staff with nine employees will see it at their local office and can respond in about 15 minutes, he said.

There have been no major accidents or injuries associated with scooter riding, White said. The devices can sense damage and will alert the staff if that happens, he said.

"We have a very well-established protocol for handling accidents if they do occur," White said. "Thankfully, we haven't had to use that yet."

Assistant City Attorney Blake Pennington confirmed the city hasn't been notified of any major incidents or accidents. Spin has to report such information, per the terms of the contract between the company and the city, he said.

The city hopes to add a second scooter vendor by spring, Pennington said. That could potentially meet the 500 cap applied citywide. That's in addition to the 440 bicycles and electric bicycles available to rent from VeoRide.

White said Spin plans to take some scooters from the downtown area and deploy them to the north part of town, near the Northwest Arkansas Mall and Lake Fayetteville, since university students have gone on holiday break.

Other cities have had problems with safety and clutter, according to national news reports. Atlanta, for instance, banned riders from using scooters from 9 p.m. to 4 a.m. in August after four people died in scooter-related fatalities, according to the Atlanta Journal-Constitution.

Chattanooga, Tenn., issued a six-month ban on scooters in July because of problems with safety and riders dumping them all over the city, according to the Chattanooga Times Free Press. The city also appointed a retired police sergeant to head a committee overseeing the scooters while officials review regulations.

Eifling said he was somewhat surprised at the lack of controversy surrounding the scooters.

"We've been very pleased with the ridership," he said. "They're exceeding expectations."

That people have been using them in the cold means users are riding them to get to a destination, rather than joyriding, Eifling said.

About 20 scooters from company Goat have operated in Bentonville since July. No major issues or accidents related to them have been reported, said Debbie Gibson, city spokeswoman.

Little Rock has a temporary contract with the company Lime and will solicit proposals from other companies to set up shop in the city early next year, said Stephanie Jackson, assistant to Mayor Frank Scott.

Little Rock began a pilot program in January with Lime. Shortly thereafter, city leaders sent a letter to the company stating its disappointment in the handling of rider safety and it wouldn't renew the contract. The city ended up extending the contract until Jan. 9.