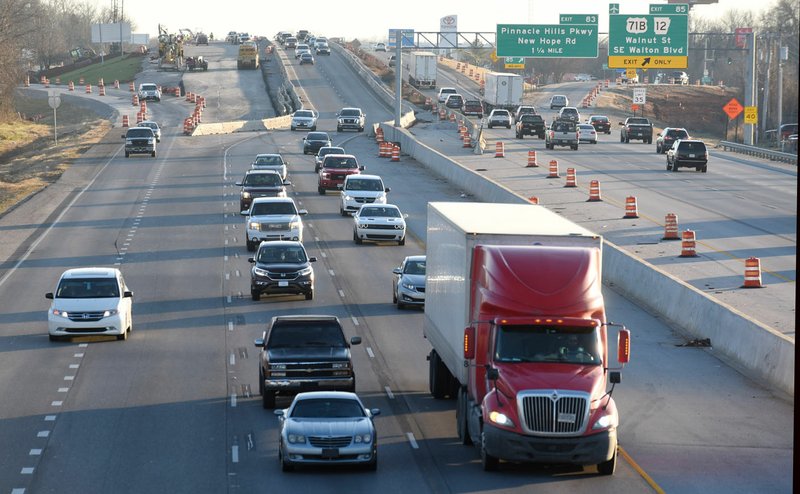 SPRINGDALE -- Northwest Arkansas residents like the trail systems, dislike driving during rush hours and want more and better public transit, according to a recently released survey.

ETC Institute, a national market research and survey group from Olathe, Kan., did the study for the Northwest Arkansas Regional Planning Commission.

• Provide travel choices other than automobiles

The final report is available on the Regional Planning website at this link: www.nwarpc.org/wp-content/uploads/2019/12/NWARegTranspSurvey.pdf.

The purpose of the study was to better understand the level of satisfaction with the region's transportation system and attitudes toward prioritizing improvement.

"I would strongly encourage our members to share that with your mayors, city council, planning commissions," Tim Conklin, of regional planning, told members earlier this week. "There's a lot of great information."

The results will be used to update the region's 2045 transportation plan and will influence many other planning decisions, Conklin said.

The commission prioritizes projects for all modes of ground transportation, he said.

Can't get no satisfaction

Residents were most dissatisfied or very dissatisfied with "flow at peak times of day" at 77%, "availability of public transit" at 73%, and "ease of travel by public transportation" at 70%.

Only 2% of respondents rated the overall quality of the system as excellent while 27% said it was good, 42% said it was average and 28% rated it as poor.

The vast majority, 73%, said traffic congestion has gotten worse over the past five years and 21% said it has increased somewhat. Sixteen percent said rush hour congestion here was better than comparable cities they had visited, and 36% said it was the same.

Traffic in the Rogers area was described by 40% as a current problem and 29% as an emerging problem.

Relieving congestion was a top three choice for 57% when asked which transportation issues should be most important.

Fully half of respondents said the capacity of major roads not keeping pace with development is a current problem, and 34% said it was an emerging problem.

A lack of public transportation and bus service was a current problem for 37% and an emerging problem for another 23%.

A lack of safe and accessible pedestrian facilities, such as street crossings and other places where pedestrian and vehicle traffic interact, was considered a current problem by 20% and an emerging problem by 20%.

About 10% said a lack of bike trails or facilities is a current problem, and another 10 percent said it is an emerging problem.

Can't hop on the bus, Gus

Residents aren't enamored when it comes to the public transportation system, particularly weekend bus service where 64% were dissatisfied or very dissatisfied; the frequency of bus service, 65%; the number of destinations offered, 66%; the times when bus service is provided, 60%; the speed of bus service 49%; the distance from their homes to a bus stop, 65%; and the availability of park and ride options, 46%.

"The best thing regarding this whole survey is that it reinforces what I've been saying over the years, that we do have a transit system, it needs to be better, it needs to have more investment in it, it's difficult to use right now," Gardner said. "All of those things, while they may sound negative, to me it's positive because more and more people are becoming aware of the needs of public transportation in Northwest Arkansas."

The four major cities pay for public transit, to the tune of $1.4 million for next year, from their individual budgets, Conklin said.

He said having to gain approval from each participating government entity for more money each year is cumbersome.

The cost of flying out of XNA had the highest level of dissatisfaction, 67%.

More than half of respondents, 54%, said they were dissatisfied with the availability of transportation services for seniors and the disabled.

The survey also asked about funding priorities, and 74% said the level of funding for public transportation in the region should be much greater over the next five years than it is now. Only 4% said it should be reduced. Eighty-one percent said it is very important or somewhat important that local entities support and fund public transportation while 6% said it was unimportant to them.

A highway revenue program that would generate additional revenue for roads is supported by 66% of respondents. Meanwhile, 16% said they would not support such a program and 18% said they were satisfied with the current highway conditions. Arkansas voters will be asked next year to extend a sales tax to pay for highway construction.

Among the highest priorities for improving transportation in the region were adding more lanes to highways, 33%, and rerouting or finding a way to keep truck and freight traffic separate, 29%.