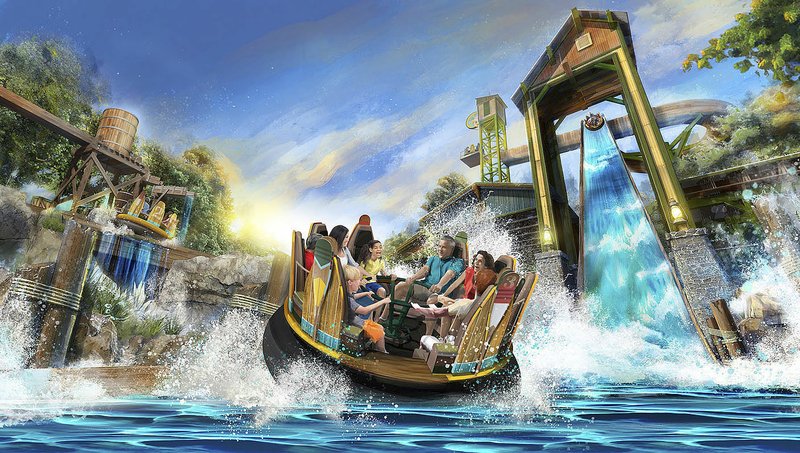 Image courtesy Silver Dollar City An artist's rendering shows the eight-passenger rafts that will traverse Mystic River Falls in the summer of 2020. "You will laugh. You may laugh so hard you snort -- and you will certainly get wet," says Brad Thomas, president of Silver Dollar City Attractions.

First time is luck, an old adage says. Second time is a coincidence. Third time is hard work. And at the fourth, your legend starts.

That's how folks at Silver Dollar City are feeling at the end of 2019. The Branson theme park's annual celebration An Old Time Christmas was just named "Best Theme Park Holiday Event" in USA Today's 10Best poll for the fourth year out of the last five.

"What a great holiday feeling, now a four-time winner," Lisa Rau, head of the park's publicity department, said after a brief news conference Dec. 13. "That takes a lot of effort on behalf of a lot of Silver Dollar City citizens to keep An Old Time Christmas so fresh, full of illumination and truly captivating. And it takes hard-earned loyalty of many guests."

An Old Time Christmas has been a staple of the holiday season at park since 1988, but this year saw a $1.5 million investment in a bigger, brighter celebration. The centerpiece of the new additions is a state-of-the-art computerized tree, eight stories tall and the first of its kind anywhere, according to its creator, S4 Lights of Atlanta. The park also boasts 680 miles of lights, 600 wreaths, more than 3 miles of garland and 15,000 yards of ribbon, plus Christmas In Midtown, with colorful, twinkling light tunnels and lighted angels, reindeer, stars and snowflakes; Rudolph's Holly Jolly Christmas Light Parade; and two Broadway-style productions, "A Dickens' Christmas Carol" and "It's A Wonderful Life."

Silver Dollar City was also recently named No. 1 in Big 7 Travel's The 50 Most Festive Cities In The World, HuffPosts' 19 Lesser-Known Amusement Parks Worth Visiting Around The World and MSN Travel's The Most Christmas-y Towns in All 50 States. An Old Time Christmas earned the "10Best" after four weeks of online voting from fans, guests and "influencers," Rau said.

"While I reserve the use of the word 'honored,' I'll use it now, as this is a true honor," she added.

But Silver Dollar City Attractions has never been a company to rest on its laurels. On Aug. 13, Brad Thomas, its president, announced a $23 million addition to the park in 2020.

Mystic River Falls, designed by the park in partnership with Swiss firm RES -- or Ride Engineers Switzerland -- and Barr Engineering, will include the tallest raft ride drop in the Western Hemisphere, Thomas said.

"You will laugh. You may laugh so hard you snort -- and you will certainly get wet," he said.

Passengers in round boats will ascend an eight-story tower, travel along 180 feet of waterway elevated six stories and splash down a 45-foot waterfall.

The adjacent Rivertown area, just behind the Riverfront Playhouse, will include a new barbecue restaurant, Rivertown Smokehouse, adding another $4 million to the construction tab. Thomas said a team traveled to the best barbecue restaurants in the country to choose the menu for the 400-seat facility.

Also on the calendar for 2020 is the theme park's 60th anniversary "Diamond Jubilee," celebrating its founding May 1, 1960. Since the park's 50th anniversary, there's been $100 million invested in Silver Dollar City, Thomas said, including Outlaw Run and Time Traveler roller coasters.

"For over 30 years, our mission and values statement has stated that we will adapt 'to our guests' changing expectations,'" Rau added. "We recognize that our guests expectations DO change and we must continue to change."

The theme park is open late through Dec. 30.