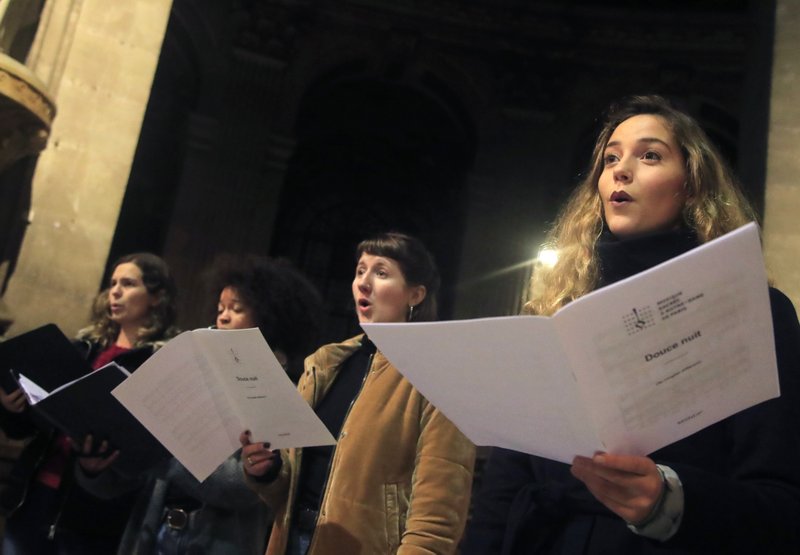 In this photo taken Monday, Dec. 16, 2019, members of the Notre Dame cathedral choir sing during a rehearsal at the Saint Sulpice church in Paris. Notre Dame Cathedral kept holding services during two world wars as a beacon of hope amid bloodshed and fear. It took a fire in peacetime to finally stop Notre Dame from celebrating Christmas Mass for the first time in more than two centuries. (AP Photo/Michel Euler)

PARIS -- Notre Dame kept Christmas going even during two world wars -- a beacon of hope amid the bloodshed.

Yet an accidental fire in peacetime will stop the Paris cathedral from celebrating midnight Mass this year, for the first time in over two centuries.

As the lights stay dim in the 855-year-old landmark, officials are trying hard to focus on the immediate task of keeping burned-out Notre Dame's spirit alive in exile through service, song and prayer.

It has decamped its rector, famed statue, liturgy and Christmas celebrations to a new temporary home pending the restoration works, just under a mile away, at another Gothic church in Paris called Saint-Germain l'Auxerrois.

And there it will remain, as work slowly progresses to rebuild the cathedral after the April 15 fire destroyed its lead roof and spire.

"This is the first time since the French Revolution that there will be no midnight Mass [at Notre Dame]," cathedral rector Patrick Chauvet said.

There was even a Christmas service amid the carnage of World War I, Chauvet noted, "because the canons were there and the canons had to celebrate somewhere," referring to the cathedral's clergy. During World War II, when Paris was under Nazi occupation, "there was no problem." He said that to his knowledge, it was only closed for Christmas in the period after 1789, when the anti-Catholic French revolutionaries turned the monument into "a temple of reason."

Christmas at Saint-Germain l'Auxerrois this year will be a history-making moment.

[Video not showing up above? Click here to watch » https://www.youtube.com/watch?v=IXwTdyYe1wM]

"We have the opportunity to celebrate the Mass outside the walls, so to speak ... but with some indicators that Notre Dame is connected to us," Chauvet said.

Those indicators include a wooden liturgical platform that has been constructed in the Saint-Germain church to resemble Notre Dame's own. A service will be led at midnight Tuesday by Chauvet to a crowd of faithful, including many who would normally worship in the cathedral, accompanied by song from some of Notre Dame's now-itinerant choir.

The cathedral's iconic Gothic sculpture "The Virgin of Paris," from which some say Notre Dame owes its name, is also on display in the new annex.

The 14th-century masterpiece, which measures around six feet and depicts Mary and baby Jesus, has come to embody the officials' message of hope after the fire.

"It's a miraculous virgin. Why? Because at the time of the fire, the vault of the cathedral completely crashed. There were stones everywhere, but she was spared. She could have naturally received the vault on her head and have been completely crushed," Chauvet said.

He recalled the moment on the night of the fire when he discovered it was saved, as he was holding hands with French President Emmanuel Macron on the cathedral's forecourt. Around midnight as the flames subsided, they were finally let inside to look. Chauvet pointed and exclaimed to Macron: "Look at the Virgin, she is there!"

He said later that Notre Dame's workmen on the ground implored him to not remove the statue from the cathedral, saying that during the restoration "we need it. She protects us."

Chauvet said having it nearby for Christmas is comforting.

"She lived very much in Notre Dame. She watched the pilgrims, all the 35,000 visitors a day ... it keeps us going," Chauvet said.

Another reason for hope: Since November, after months in the dark, the facade of the cathedral is being lit up after dusk for the first time since the fire. Tourists visiting over the festive period can now see the famed gargoyles and stone statues at night in their full illuminated splendor from the adjacent bridges, although the forecourt is still closed.

Cathedral officials carefully chose Saint-Germain l'Auxerrois as the new temporary home because of its proximity to Notre Dame, just next to the Louvre, allowing ease of movement for clerics who lived near the cathedral. Also, because of its prestigious history.

It was once a royal church that boasted among its faithful French kings, in the days when they lived in the nearby Louvre Palace. The kings, Chauvet explained, would simply cross the esplanade to attend Mass.

Since September, the church has been welcoming the cathedral's flock each Sunday.

Though Notre Dame has moved liturgically to a new home, Notre Dame will always remain Paris' cathedral so long as the bishop's physical chair, or "cathedra" doesn't move.

Derived from the Greek word for "seat," a cathedral's entire identity technically boils down to the presence of a chair.