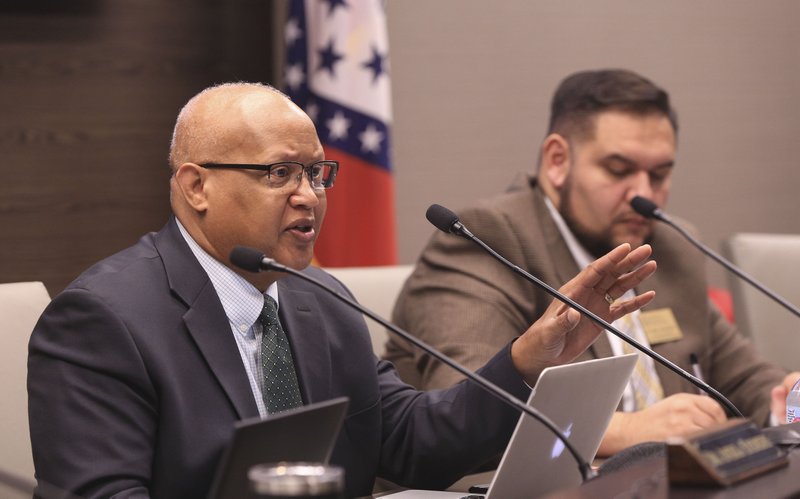 The panel will recommend to the state Board of Education that the school's charter be immediately revoked when the board convenes in January.

Panel members expressed concern over several areas, including the school's fiscal health, academic performance and child nutrition, as well as a lack of transparency, citing the school's failure to meet a number of reporting deadlines to the state.

• Approved a five-year renewal of the charter for Arkansas Virtual Academy in Little Rock, which has D-graded elementary, middle and high schools that serve some 2,474 students statewide.

• Approved a three-year charter renewal for Capital City Lighthouse Academy in North Little Rock that serves 167 kindergarten-through-fifth grade pupils in a school that currently has an F grade from the state.

• Accepted a report from Pine Bluff Lighthouse Academy on its efforts to improve its elementary school F grade from the state.

Decisions made by the charter panel -- made up of state employees and others -- are subject to review by the state Education Board, which has the authority to finalize panel decisions on charters without further review or conduct its own hearing on a charter school before making a final decision.

Southeast Preparatory High School officials, including Superintendent Jeremy Cegers, were called before the panel after the school received an F grade from the state for low academic achievement during the 2018-19 school year.

The school had almost 66% of students in need of support in reading. The school had financial issues, as well, including low bank balances, negative end-of-year financial projections, and unsubmitted food service claims.

During the hearing, panel members also became aware that the charter school had failed to provide adequate education to 11 special-education students under the terms of their individual education plans, which will require the school to provide compensatory instruction for at least two months. That would place an even greater financial burden on the charter school.

Members learned that the school's bank accounts were being artificially propped up to show a positive cash balance by a number of invoices that have gone unpaid.

"At this point, provided that everything was to clear the bank and all of the invoices that are outstanding were to be paid, I'm coming up that there would be a negative $22,146.69," Heather Barrick, program fiscal manager with the Arkansas Division of Elementary and Secondary Education, told the panel.

She said some of the issues she identified included food issues and insufficient budgeting.

"At this point none of the food services invoices have been paid," she said.

Barrick said the school has been invoiced $33,259 for food service from August through the end of November, all of which she said is outstanding. She also said that until Dec. 17, there was no signed food services contract.

Food service for the charter school is contracted through the Pine Bluff School District.

Barrick said other fiscal problems included no budgeted worker's compensation insurance, and no teacher retirement payments were made. In November there were no payments made for rent, water and internet, and waste management and janitorial services invoices for November were not paid until mid-December, and the benefits for the November payroll have not been paid.

"There were so many issues in addition to the academics," said Ivy Pfeffer, chairman of the panel and deputy commissioner of education. "We were surprised today at the special-education issue, the child nutrition issues they are having, and the continued struggles getting them to comply with legal requirements. The infrastructure and the capacity is simply not there for them to be able to continue."

Southeast Preparatory High School opened in August 2018. The school has grades 9-12, with 107 students, 99% of whom are black, according to the state agency. The school received a grade of F for the 2018-19 academic year, the same as Pine Bluff and Dollarway high schools. The Pine Bluff and Dollarway school districts have been taken over by the state and are operating without a locally elected school board and with state-appointed superintendents.

In regard to Arkansas Virtual Academy, Head of School Amy Johnson told the panel that the online charter school's biggest area of passion and urgency is on academics. The charter program's elementary school has had a D from the state for three years, and the middle and high schools fell this year to D's after each having a C in the previous year.

The grades are based on a combination of ACT Aspire exam results, year-to-year growth on the state-required exams and school quality/student success factors such as student attendance and high school graduation rates.

In her presentation and in response to questions from the six charter panel members present Wednesday, Johnson described the school's expanding career and technical education programs for secondary school students, but said that more than anything else efforts are underway to increase the overall effectiveness of the school's more than 100 teachers.

"We are observing our teachers at a minimum of monthly and every single teacher meets with their principal one-on-one quarterly to not only look at post data but to plan for the coming quarter," Johnson said, adding that plans are underway to enable academy teachers to observe teachers at other schools.

Additionally, the teachers are meeting weekly in professional learning communities to discuss lessons and look at student data. Subject-area content teams meet to evaluate test results and to determine what students have achieved and what needs to be re-taught, she said. Reading instruction is being increased in all subject areas, she also said.

Virtual Academy is administering ACT Aspire interim tests to students at locations around the state to familiarize students who generally work from their homes with a testing environment. The interim tests also provide teachers with detailed information on what students know and don't know.

When students convene in different parts of the state for enrichment activities, the parents or other adults who work directly with the students -- "learning coaches"-- are provided training to help with their students, Johnson said.

Panel members unanimously supported the request for the charter's five-year renewal, saying that faculty members have a "thoughtful process" for improving academics. The panel denied the academy's request for a 750-student increase in the current 3,000-student cap.

Pfeffer told Johnson that the school has not shown the success it needs to show in academics, but she was encouraged by conversations around partnerships with other education organizations, career education opportunities for students and support for the parent/learning coaches.

Rosanna Mhlanga, principal of the 167-pupil school, and John Osborn, assistant principal for instruction, described not only the training provided for teachers in the science of reading and dealing with trauma, but also the lengths taken to improve student attendance.

That includes deploying a bus to pick up children who miss the bus on the first go-round, as well as celebrating students and classrooms that demonstrate good attendance.

Osborn also detailed the academic gains on the state Aspire tests at the kindergarten-through-fifth grade school that have netted the school awards from the University of Arkansas, Fayetteville Office for Education Policy.

Panel member Naccaman Williams of Springdale, who had recently visited Capital City, said he had been concerned about the school's F grade from the state but was "extremely" impressed with the teaching and learning and student engagement that he saw.

Parent Patrice Howard told the panel that her three children have blossomed at the school that features a longer, 190-day school year. They had struggled at other campuses.

Pine Bluff Lighthouse Elementary, also called in for review after receiving an F grade two years in a row, received the panel's support Wednesday after submitting a plan for improvement that included a focus on academic performance, reading interventions, and a partnership with the Pine Bluff School District that includes a summer school literacy program for fifth grade students and a summer start program for incoming students.

Superintendent Lenisha Roberts told the panel that the school is working to identify students who suffer from dyslexia and to provide intervention services for those students.

Sarah Galleger, chief academic officer for Lighthouse, told the panel that one key to academic success the school is implementing is a focus on absenteeism and, to that end, the school has put into place an attendance task force.

The result, she said, was an improvement in average daily attendance from 90% to 91% last year to 95% this year.

"Additionally, we have nearly cut in half our number of chronically absent scholars, those who have missed more than 10% of the school year," Galleger said. "From 60 scholars last year to just 31 this year."

Another area she said is key to improvement is teacher training.

"We have worked hard to ensure that our teachers are masters of their content with routine weekly support from a former Department of Education trainer," she said. "We have continued to support our teachers through RISE training. Two teachers have completed the training and an additional 13 more are on the way."

Additionally math and science training is being made available as part of the school's academic improvement plan, she said.

After hearing the details of the school's plans for improvement, the panel unanimously recommended that the school's report be accepted as presented, which, if approved by the Board of Education in January, will provide the school with two years to make continued improvements before having to go before the panel again.