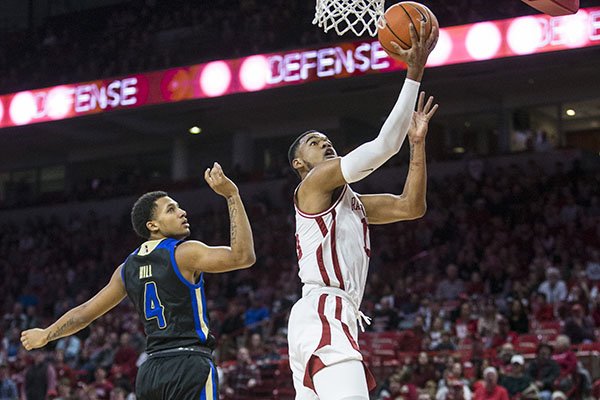 Arkansas guard Mason Jones goes up for a shot while Tulsa guard Isaiah Hill watches during a game Saturday, Dec. 14, 2019, in Fayetteville. - Photo by Ben Goff

FAYETTEVILLE -- Mason Jones didn't just light up Tulsa with his 41-point scoring effort Saturday. He also led the University of Arkansas' steals brigade during the Razorbacks' 98-79 victory at Walton Arena.

Jones had a game-high four steals among the Razorbacks' season-high 12 swipes as Arkansas outscored the Golden Hurricane 23-8 in points off turnovers.

Tulsa Coach Frank Haith lamented the live-ball turnovers that led to multiple runouts by the Razorbacks, especially in the first half. He compared the defensive effort to the work of former Arkansas coach Mike Anderson's teams.

"I think we had some mental mistakes," Haith said. "We tried for home-run plays. We had a couple of balls that were right in our hands, and we just didn't hold on to them.

Arkansas Coach Eric Musselman said he and his staff have stressed how to get more possessions even though the Razorbacks are not a strong rebounding team.

"The way for us to do that is to have active hands and try to get deflections," Musselman said. "I thought we got away from that a little as the season slowly progressed. I thought we got back to playing with the offensive pace we needed to."

Jones and fellow guard Isaiah Joe combined for seven of the Hogs' steals.

"Both those guys on the wings do such an incredible job of jumping passing lanes and using their wingspan and not having their hands in their pockets when they defend," Musselman said.

The Razorbacks had a solid shot at scoring 100 points for the first time this season before going scoreless during the final 1:09 after an Isaiah Joe jump shot.

Arkansas had a three-point miss from Emeka Obukwelu with 32 seconds left, then Ty Stevens went to the free-throw line with two seconds remaining and missed both ends of a two-shot foul. The rebound on the second miss went to Ethan Henderson, whose missed a last-second shot to set the final score of 98-79.

New Arkansas football Coach Sam Pittman was introduced to the crowd at the 3:50 mark of the first half.

Pittman brought a microphone with him and said a few words that inspired cheers and applause.

"How about this Razorback BB team?" Pittman asked. "Hey, we're going to work hard. We want to make the Razorback nation proud of our football team.

"I'm very honored to be your coach, and I promise you that you're going to be happy I am. With that said, I think it's time to call them Hogs!"

Arkansas pulled off a clever play in the last five seconds of the first half. Guard Jalen Harris pushed the ball up quickly with the clock dipping below two seconds, then turned and dished to trailer Mason Jones, who pulled up from about 30 feet straightaway with Tulsa's Darien Jackson and Elijah Joiner right on him.

Jones, whose last three-point shot had been an air ball, got better results on this one. The ball hit the front of the rim, nicked high off the backboard, then dropped through at the buzzer as Joiner pounded the court in frustration.

Arkansas' Mason Jones was in the midst of another long made free throws streak before missing his final try against Tulsa. Jones made his first 12 against Tulsa to give the junior guard 24 consecutive makes from the line.

Jones' previous last missed free throw came in overtime in a 62-61 victory at Georgia Tech, the only other game in which he's missed from the line this season. He opened the season by making his first 27 free throws to give him 36 in a row dating to last sesaon.

Arkansas and Tulsa are scheduled to play a return game next season at the Golden Hurricane's Donald W. Reynolds Center.

"It's of great value," said Tulsa Athletic Director Derrick Gragg, a former UA senior associate athletic director (2000-05). "To be able to get this type of opponent into our venue is always special. It's special for our fans and also it's a good travel game for the people here in the Fayetteville area.

"I know there's also a lot of Razorback fans in Tulsa. So I think it's a win-win, kind of like our football series."

Arkansas improved its lead in the series to 37-24 with its victory Saturday.

Forward Adrio Bailey made an ill-advised decision after nabbing a defensive rebound and being fouled by Tulsa's Darien Jackson late in the first half.

The Razorbacks shattered their highest-scoring first half of the season by leading Tulsa 50-34 at intermission.

Arkansas' previous halftime high had been 39 points. The Razorbacks were leading Rice 39-19 at the break and leading South Dakota 39-24 at halftime.

The Razorbacks have been a very good free-throw shooting team in the early going, but they had their second-worst game of the year at the line by making 19 of 29 (65.5%). The only performance that was worse was a 63.6% effort in the opener against Rice.

After Arkansas guard Desi Sills took a hard fall onto the court with 4:42 left in the first half after a collision with Isaiah Hill, Tulsa got to exercise a rare decision.

Because Sills was unable to stay in the game, the Golden Hurricane got to choose which Razorback on the floor would take the free throws. Coach Frank Haith picked Jimmy Whitt, a 62.9% free-throw shooter, who went 1 for 2.

Prior to the national anthem, UA officials held a moment of silence to honor the memory of fallen Fayetteville police officer Stephen Carr.

Carr was ambushed, shot and killed in his police cruiser on Dec. 7, and his memorial service was held Thursday at Walton Arena.

• First-year Arkansas gymnastics Coach Jordyn Wieber was introduced to the crowd during a media timeout and the current team did a series of flips, handstands and other maneuvers to convene at midcourt before throwing out T-shirts.

• Arkansas forward Adrio Bailey and Tulsa guard Brandon Rachal hugged it out after Bailey blocked Rachal's shot out of bounds early in the second half.