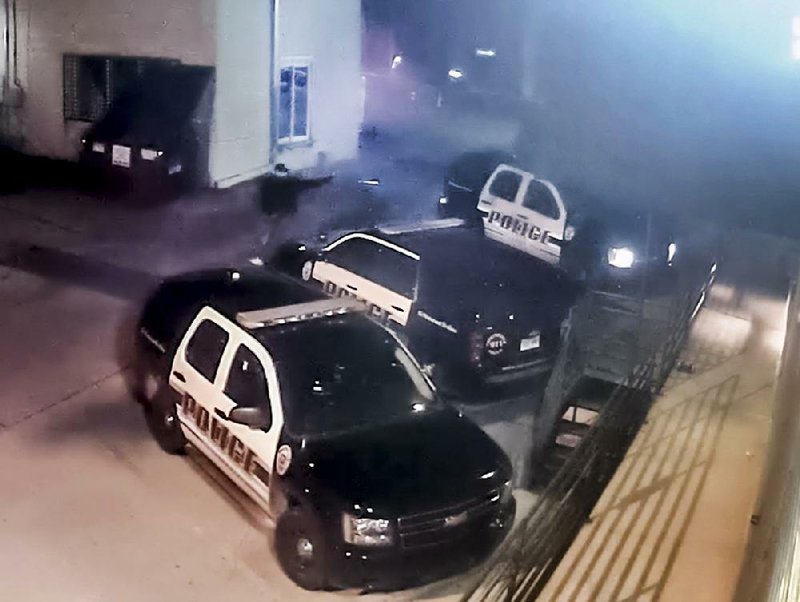 An image taken from video shows the muzzle flash as a man fires a handgun while walking through a Fayetteville Police Department parking lot Dec. 7. Officer Stephen Carr was killed when a gunman fired several rounds while Carr sat in his patrol vehicle.

FAYETTEVILLE -- Any of the 10 bullets that struck officer Stephen Carr would have been fatal, according to preliminary state medical examiner's office findings released Friday.

The Washington County sheriff's office released five videos and details about the shooting through the agency's Facebook page. The sheriff's office, with assistance from the FBI, has taken the lead in investigating the shooting. Video was shared with the slain officer's family before it was released.

Carr, 27, was killed as he sat in his patrol vehicle while in the parking lot behind the Fayetteville police station late last Saturday. Soon after, pursuing officers shot and killed the gunman, London Phillips, 35.

Investigators said they believe Phillips parked a Lincoln Navigator on Mountain Street west of City Hall shortly after 9:30 p.m. on Dec. 7. He took to the sidewalk heading east, passing a couple walking in the opposition direction.

Phillips had a 9mm semiautomatic handgun with a laser sight, Reynolds said. He walked around the vehicle, shooting the Chevrolet Tahoe a few more times through the back window and at its rear passenger side.

[Video not showing up above? Click here to watch » https://www.youtube.com/watch?v=SL8pRK9FekQ]

Phillips can be seen in the video reloading moments before Cpl. Seay Floyd exited the station's back door, saw Phillips and opened fire. Phillips hopped over a retaining wall in the alley that separates the police station and the city prosecutor's office.

Sgt. James Jennings and officer Natalie Eucce also exited the back door and pursued Phillips. Phillips crouched in the alley, hiding behind a wooden fence that screens the police station's generator, Reynolds said.

"I feel like he was waiting there to ambush my officers," Reynolds said. "They took a tactical approach, and they were able to draw him out."

Floyd and Eucce fired at Phillips, killing him. Jennings didn't fire his weapon, Reynolds said. The video shows all three officers in the open when the shots were fired. Floyd and Eucce are on paid administrative leave, per departmental policy, during an internal investigation of the shooting.

Preliminary findings from the state medical examiner show that Phillips was shot six times, according to the sheriff's office.

"It was very clear that he had intentions to wreak havoc and kill others," Reynolds said.

A former neighbor of Phillips said Friday that Phillips had threatened to kill a police officer in Baxter County three years ago.

Kayla Clossen said Phillips initially threatened to shoot her then-fiance, Chris Clossen, who wasn't present at the time. She was Kayla Kelley then.

"He was just a scary individual," she said. "He should have been stopped a long time before it ever reached this point. ... He was mentally unstable and everybody knew it, and nobody did anything about it."

Clossen said she didn't report the death threat to police.

On Jan. 12, 2017, Phillips told police that he had been having trouble with Chris and Kayla Clossen, who lived in the apartment below his at Norfork Villas. He told police Chris Clossen "threatened him and cursed him out on several occasions," according to the report.

Phillips said his neighbors "are lying about him, trying to get him in trouble with the landlord and law enforcement," according to the report.

The next incident was four days later. Phillips reported his mother's car was damaged in the parking lot of the apartment complex five days earlier. Phillips told police that he thought Chris Clossen had something to do with it.

"I looked at surveillance video of the parking lot and could not see anyone who damaged the vehicle," Griffin wrote in his report.

Clossen said when Phillips moved into the apartment complex sometime in 2016, she invited him to a barbecue.

"He started drinking, and I told him I didn't want it around my children," she said. "I told him if he wanted to drink, I would prefer it if he went upstairs."

Clossen said Phillips went to his apartment and returned later, "yelling and cussing at us." From then on, he harassed them, she said.

"The man was just a straight creep, from the time I met him until we found out what happened," she said. "He would make up whatever he could to get me in trouble."

But the shooting in Fayetteville changed her mind.

"It made me realize how unsafe my children were, how unsafe I was," she said.

Reynolds said he believes Phillips intended to engage in a firefight with the officers. Phillips carried two boxes of ammunition, one full box with 50 rounds and another with 32 rounds. Reynolds said as far as he was aware, Phillips didn't fire at the responding officers.

Officers are instructed to fire their weapons if they believe their life, the life of another officer or the lives of anyone in the public are in danger, Reynolds said.

Phillips had just killed an officer, reloaded and was in possession of more ammunition, Reynolds said.

"I certainly believe he was going to inflict harm onto others, and I believe these officers are heroes for what they did," he said. "They stopped this threat, and they stopped others from being killed. Maybe even other law enforcement officers, or maybe people who were on the square, or maybe folks who were attending events at the Town Center."

Video shows an officer rendering aid to Phillips shortly after he was shot. Officers also ran to Carr's vehicle to give aid to Carr. Both were pronounced dead at the scene.

Phillips lawfully bought a gun in Mountain Home in July 2017, Reynolds said. Within the past few months, Phillips obtained a medical marijuana card, barring him from owning a firearm.

In August, Fayetteville police were called to a pawnshop where Phillips was trying to retrieve a shotgun he had pawned, Reynolds said. Phillips failed a background check and became upset about it, prompting the shop to call police.

Body camera footage of the dispute showed Phillips acting cordial with the officer, Reynolds said. The issue was resolved without incident.

Regardless of the station's security measures, it appeared Phillips had intent, Reynolds said.

"If it wasn't here, this suspect was going to kill an officer," Reynolds said. "And he would've killed him anywhere."

Carr's memorial service was held Thursday in Bud Walton Arena on the University of Arkansas, Fayetteville campus. Thousands of people, including law enforcement officers from as far away as New York and Chicago, paid their respects.

Carr was from The Woodlands, Texas. He joined the Fayetteville Police Department in 2017. 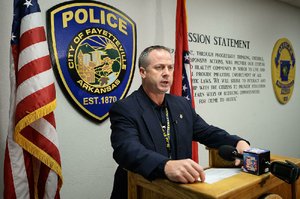 Photo by Andy Shupe
Fayetteville Police Chief Mike Reynolds said Friday that investigators believe London Phillips shot Fayetteville officer Stephen Carr 10 times when he was killed Saturday night and had 99 rounds on him. “It was very clear that he had intentions to wreak havoc and kill others,” Reynolds said of Phillips. 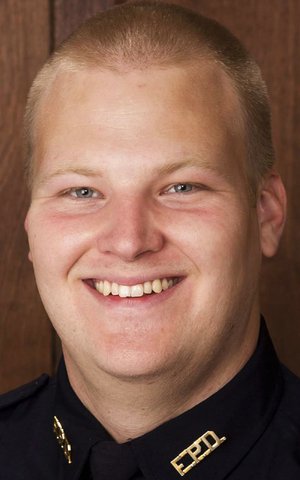 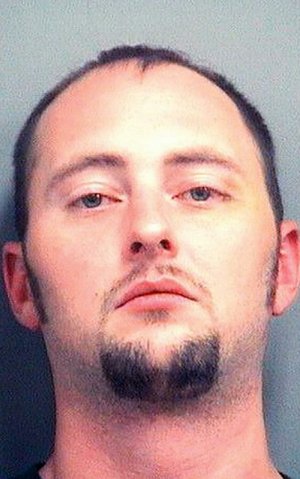