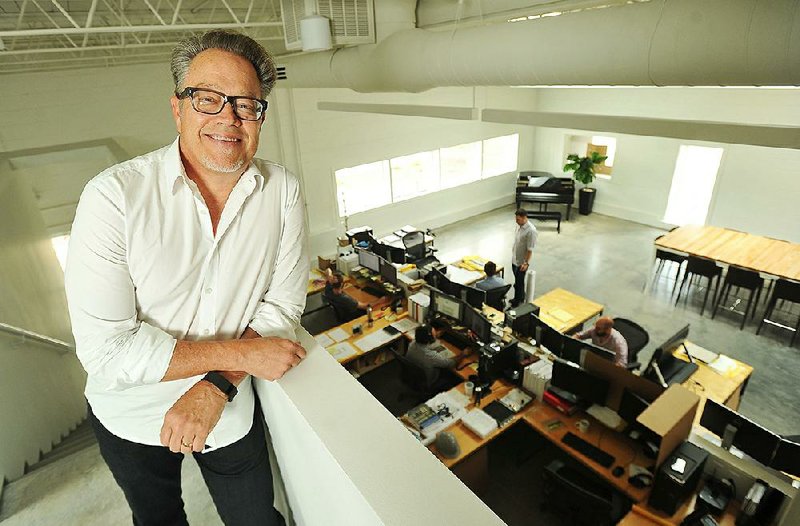 FAYETTEVILLE -- Marlon Blackwell has been named the winner of the 2020 Gold Medal, the highest honor from the American Institute of Architects.

Winners of the annual award are recognized for work with a "lasting influence" on architecture theory and practice, according to an announcement from the architecture organization.

Past winners of the award, which dates back to 1907, include Frank Lloyd Wright, Le Corbusier and Frank Gehry.

Another winner, Fay Jones, for whom the University of Arkansas, Fayetteville architecture school is named, was a friend and mentor, said Blackwell, 63.

Blackwell, now a distinguished professor and the E. Fay Jones Chair in Architecture at UA, said he was "dumbfounded" to learn he had received the honor.

"This recognition helps affirm that good architecture at the highest level can happen wherever you are. That's the significance of it, I think. It's a win for all of us in all of the 'flyover' states," Blackwell said.

He founded his Fayetteville firm, Marlon Blackwell Architects, in 1992, the same year he began teaching at UA.

"It didn't matter the scale or the cost of any one of these [projects]," Blackwell said. "They all have their own significance. That's the point: it could be a small church, it could be an architecture school, it could be a whole landscape of buildings."

Blackwell said he shares the honor with his wife, Ati Blackwell, also a principal with the firm and its interior design director.

"All her contributions and support really helped make this happen," Blackwell said.

The American Institute of Architects announcement, dated Wednesday, and a short biography of Blackwell published on the AIA website refer to Blackwell as "a product of the American South."

Blackwell, who lives in Fayetteville, was born in Germany, but his early life included time living in Alabama. He attended college at Auburn University as an undergraduate. He went on to earn a graduate degree from Syracuse University, studying in Florence, Italy, through the program.

He said he looked up to Jones, who won the 1990 Gold Medal, as an "inspiration" and "a great human being."

"He proved you could do it in the middle of the country," Blackwell said of Jones' success.

Blackwell also credited support from the university for helping his career and keeping him in Fayetteville, even as he has taken on more projects outside the area.

"I just think it's a great place to live and work. So that's what's kept me," Blackwell said.

Peter MacKeith, dean of the UA Fay Jones School of Architecture and Design, in a statement referred to Blackwell as deserving of the honor.

"For our school, he is a valued colleague and faculty leader, and for the state and nation, he is a distinguished representative and ambassador. Yet in these roles, Marlon is distinguished as much by his generosity and humaneness, as he is by his talent in design and his commitment to buildings and places," MacKeith said.

Brian MacKay-Lyons, an architect based in Canada, in a letter supporting Blackwell's nomination for the award said "he builds confidently upon the American cultural landscape," and that the work "is connected to society, rather than being aloof."

"I keep telling folks: architecture can happen anywhere, in the places you least expect to find it," Blackwell said.