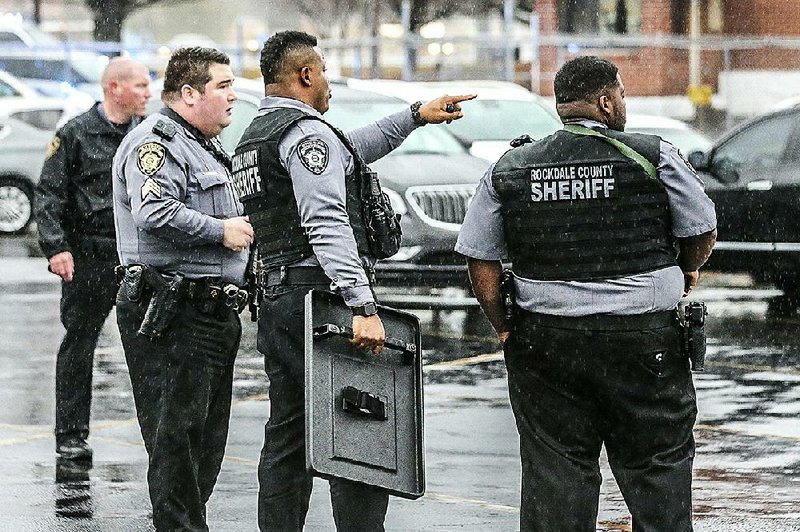 Authorities stand outside the Dart Container facility in Conyers, Ga., where a worker was killed Friday in an early morning shooting.

CONYERS, Ga. -- A contract worker was arrested at an Alabama bus station Friday, hours after officials said he shot and killed a fellow worker in a suburban Atlanta factory.

Rockdale County Sheriff Eric Levett described the shooting as "workplace violence," but couldn't say for sure whether Cameron Golden specifically set out to kill victim Taurus Andrews. He said Golden is charged with murder.

"We don't even know if Mr. Andrews was a target," Levett said. "We don't if Mr. Golden was upset with Dart Container, was he upset with any particular person there? We just don't know those answers as of yet."

The shooting came at shift change at the Dart Container Corp. site in Conyers, sparking panic among the 300 or so employees. Levett said investigators believe Golden entered the plant, shot Andrews and then left in the five-minute window before police arrived at the factory, which makes plastic food and beverage containers.

Andrews later died at a hospital.

Levett said authorities tracked Golden and said he was arrested at a Birmingham, Ala., bus station by federal and local officials.

DENVER -- A man accused of killing three people and injuring nine others at a Planned Parenthood clinic in Colorado in 2015 appeared in court Friday in Denver on new charges and insisted he is competent to stand trial.

Federal prosecutors have asked the judge to order a new mental evaluation for Robert Dear, who was previously ruled to be incompetent to stand trial in state court.

Dear, 61, is facing 68 counts in the federal case, including use of a firearm during a crime resulting in death and violating a law ensuring access to clinic entrances.

U.S. Magistrate Judge Kristen Mix on Friday gave Dear's attorneys until Dec. 20 to respond to the request. Dear has said he is guilty and told the judge he understood his rights and the charges against him.

Dear, who remains in the custody of the U.S. Marshals Service, held police at bay for more than five hours during the November 2015 attack in Colorado Springs that sent hundreds of holiday shoppers scrambling for safety.

A police officer from the University of Colorado and two people who were accompanying friends to the clinic were killed in the rampage.

Dear also faces 179 charges in state court, including murder and attempted murder, but that case has languished since he was deemed incompetent to stand trial in 2016. His mental-health status has been reviewed every 90 days without change.

The city had not received any ransom demands as of Friday afternoon, however, Mayor LaToya Cantrell said at a news conference. City officials said the shutdown at 11 a.m. was done out of "an abundance of caution."

As of Friday afternoon, there was no indication that any city employee had provided passwords or other information that might have inadvertently led to a breach, said city technology director Kim LaGrue.

State officials are investigating along with the FBI and Secret Service, Cantrell said.

NEW YORK -- A 13-year-old boy has been arrested in the fatal stabbing of a Barnard College student in a park near the school's New York City campus, two law enforcement officials with knowledge of the investigation said Friday.

The boy was charged with murder in the slaying of 18-year-old freshman Tessa Majors and is expected to be tried as a juvenile delinquent in family court, said the people, who were not authorized to speak publicly about the case and did so on condition of anonymity. Under state law, he can only be tried as an adult if he is charged with intentional murder.

As many as three attackers were involved, police have said, and the president of Barnard College said Majors was stabbed during a robbery.

New York police spokesman Andrew Lava declined comment on the arrest of the boy but Police Commissioner Dermot Shea tweeted later that detectives "are making significant progress, and we will have major updates to announce very soon."

Majors, from Charlottesville, Va., was walking in Manhattan's Morningside Park just before 7 p.m. Wednesday when she was accosted and stabbed during a struggle, detectives chief Rodney Harrison said.

She staggered up a stairway to a nearby street, where she was spotted by a campus security guard who called 911, Harrison said. Majors died at a hospital. 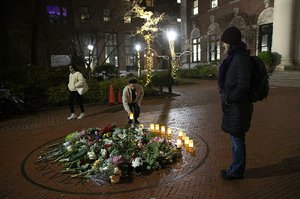 Photo by AP/Mary Altaffer
Flowers and candles are arranged in a makeshift memorial for slain student Tessa Majors on the Barnard College campus in New York.