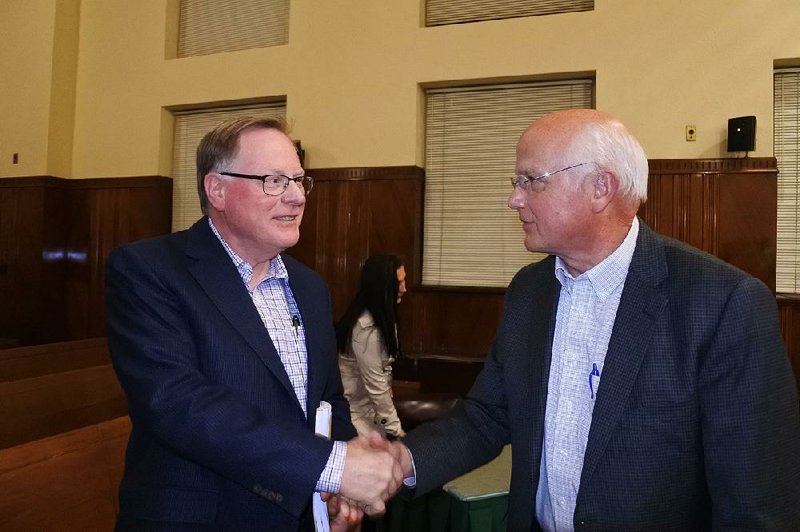 FORT SMITH -- Residents of Sebastian County will have a new treasurer/collector for the next three years.

The Sebastian County Quorum Court approved a resolution appointing the county's human resources director, Steve Hotz, to the position of county treasurer/collector for the period of Jan. 1, 2020, through Dec. 31, 2022.

The decision, reached at a special meeting Thursday, took place after justices of the peace approved a resolution officially declaring the position to be vacant.

"It's an honor to serve, and it's actually a real honor to be nominated to do that by the people I work with," Hotz said after the meeting.

Hotz said his priorities as treasurer/collector include a smooth transition and serving the people of Sebastian County. He would also like to make some changes that he believes will help residents.

County Judge David Hudson said Hotz will be unable to run for the treasurer/collector position during the primary and general elections that will take place in 2022.

Hudson notified the Quorum Court that the incumbent treasurer/collector, Judith Miller, resigned from her position effective Dec. 31 during its meeting Nov. 19.

Miller wrote in her Nov. 15 resignation letter that she was leaving her post because of an unspecified "life changing event." She also recommended that Tammie Brown be appointed as interim treasurer/collector to serve out the remainder of her term, citing Brown's more than 11 years of experience in that office. Brown said her current title is chief administrator treasurer.

In a memo to the Quorum Court dated Dec. 6, Assistant County Administrator Jeff Turner said the county judge's office received four letters of interest with resumes in reference to the vacancy of the position before a deadline of 4:30 p.m. Dec. 4. The applicants included Brown, Hotz, Tom Minton and Lora Rice.

Minton's professional experience includes serving as CEO and president of Pro-Rooter Industrial Services from July 2014 to March 2016, and CEO and president of United Way of Fort Smith Area from July 2008 to December 2014, according to his resume. He served as assistant county administrator for Sebastian County from 2000 to 2008, and was in the United States Air Force from 1977 to 2000.

Rice's work experience, her resume states, includes being a controller for Umarex USA Inc. from February 2006 to November 2019 and a bookkeeper for Landmark PLC, formerly Beall Barclay & Company PLC, from February 1992 to February 2006.

Hotz previously said the yearly salary for the county treasurer/collector position was $93,731.