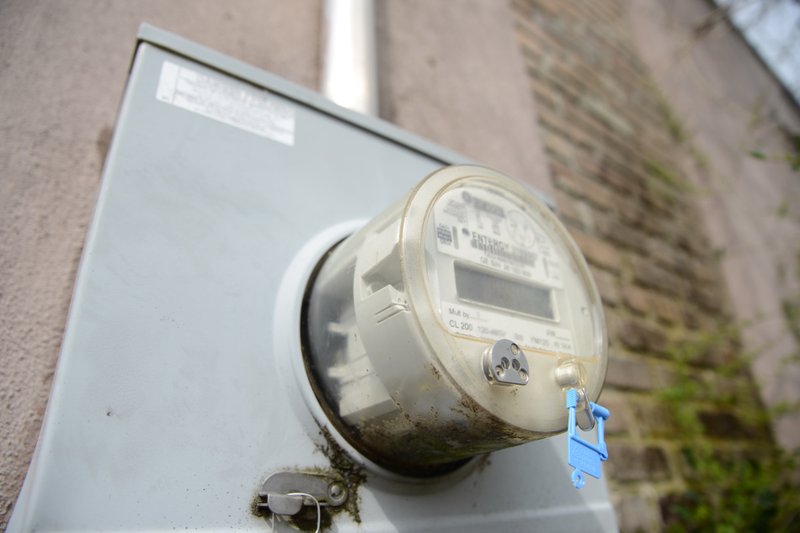 FILE — A current Entergy meter sits on the side of a downtown Magnolia building.

Residential customers of Entergy Arkansas will see their monthly bills increase by an average of $15 beginning in January as a federal tax credit expires. Southwestern Electric Power Co. customers also will see their bills go up, though a company official did not have specific information available Friday.

Entergy Arkansas is notifying customers that tax credits that were implemented 21 months ago are now rolling off electric bills.

"It's important to note that this tax credit roll-off is not a rate increase," said Michael Considine, Entergy's vice president of customer service. "However, because the credit ends, this will affect bills going forward."

Entergy said the billing credit was about $15 per 1,000 kilowatt hours used, noting that's about how much electricity a residential customer uses on average each month. The credit was higher for customers who used more electricity.

After Congress approved tax cuts in December 2017, many businesses across the nation passed those credits along to customers or gave salary increases to employees. The new law lowered the 35% federal tax rate to 21%.

Entergy Arkansas credited residential customers' bills for $230 million, beginning in April 2018 and ending this month. That approach was approved by the Arkansas Public Service Commission.

"We want all of our customers to be aware that the tax credit of nearly $230 million that has been returned to residential customers since April 2018 ends this month," Considine said in a prepared statement. "Bills will return to levels very similar to March 2018 before the credit was applied."

Southwestern Electric Power customers were given billing credits of $22.5 million from October 2018 through this month, spokesman Peter Main said. Expiration of the credits will lead to higher bills in January, though Main said he did not have details of the exact effect on customers.

The utility serves nearly 120,000 customers in 13 Arkansas counties, mainly along the Oklahoma and Louisiana borders.

Gas utility CenterPoint Energy also gave customers billing credits related to the tax cuts. Those credits, which reached about $17.3 million in Arkansas, ended 10 months ago. The credits averaged about 9% per residential customer from October 2018 through February of this year, CenterPoint spokesman Ross Corson said.

"We gave customers the credits in the winter months when bills are typically at their highest," Corson said. "Those ended earlier this year." CenterPoint serves more than 400,000 customers in the state.

Other utilities, Central Arkansas Water and Arkansas Electric Cooperatives Corp., were not eligible for the federal tax cuts. The water utility is municipally owned and the electric cooperative, which represents 17 providers statewide, is a nonprofit organization.