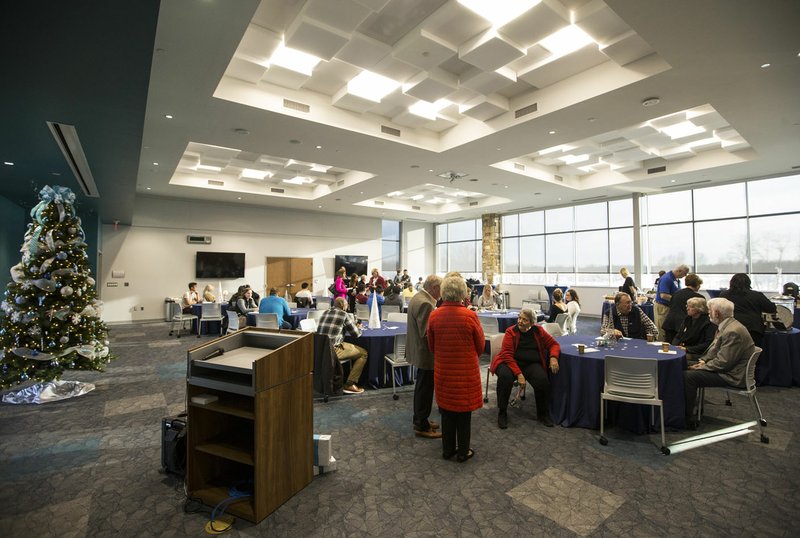 NWA Democrat-Gazette/BEN GOFF &#8226; @NWABENGOFF Guest mingle Tuesday in the event room during an open house at Northwest Arkansas Community College's new Washington County center in Springdale. The campus, next to Arvest Ballpark, will open for classes when the spring semester begins Jan. 13. Go to nwaonline.com/photos to see more photos.

SPRINGDALE -- It was one of the biggest questions Evelyn Jorgenson faced during her interview for the president's job at Northwest Arkansas Community College: Could she steer to completion the college's first construction project in Washington County?

She promised to do so, she said. Now, seven years later, Jorgenson can cross the project off her to-do list.

The college celebrated its new Washington County Center with an open house Tuesday and a ribbon-cutting Thursday with the city's Chamber of Commerce.

The center, next door to Arvest Ballpark, officially opens for business Jan. 2. Officials expect about 800 students to be enrolled in classes there when the spring semester begins Jan. 13.

About 36% of the college's students live in Washington County, according to the latest statistics. The center also is closer than the Bentonville campus for students in Siloam Springs.

While the building is complete, fundraising for it continues. The college's foundation has raised about $5.8 million toward the building's $12 million cost, according to Annetta Tirey, the foundation's director.

Most of the money has come from a few big donations, the largest a $2 million gift from the Walton Family Foundation. The fundraising effort started about four years ago.

Tirey is about to depart after three years on the job. She submitted her resignation last month, effective Jan. 3. Treva Kennedy, associate director, will serve as interim director until a permanent replacement is chosen, Jorgenson said.

"We're in very capable hands with Treva," Jorgenson said, adding she tried unsuccessfully to get Tirey to change her mind.

Campaign pledge cards were handed out at Tuesday's open house. Mike Luttrell, chairman of the foundation, asked attendees to consider a donation.

Improved service to students in Washington County was a priority for the college, which is why officials refused to wait until fundraising was complete to build the center, Tirey said. The foundation pursued some financing, and the college makes loan payments to the foundation to cover that debt, she said.

"It's important to get that debt paid off, which frees the college up to better serve the students," Tirey said.

• January 2004: The college begins leasing space on White Road in Springdale, marking the beginning of the college’s presence in Washington County.

• December 2011: Officials reveal they are considering 12 sites in Washington County, including four in Springdale, to build a classroom complex.

• May 2012: The Board of Trustees gives administrators approval to speak with Philip Taldo about land he owns just west of Arvest Ballpark on Watkins Avenue in Springdale.

• August 2015: The board approves the development of a 50,000-square-foot facility on its Springdale property.

• July 2017: College President Evelyn Jorgenson announces the center won’t be as large as originally envisioned. The building ends up at 38,000 square feet.

The center will consolidate the 25,000 square feet the college leases in three Washington County locations: two in Springdale and one in Farmington.

The college pays a combined $212,664 annually to lease those three spaces, according to Gulizar Baggson, interim vice president of finance and administration. Leases on all three spaces will expire by the end of January.

The center includes an information commons where students can study and relax, both inside and on the adjacent outdoor patio. It will be staffed by a reference librarian. Students also may come to the commons for tutoring and help from math and writing specialists.

"I'm really excited about this space because if students need help, they don't have to figure out where to go. They come in here," said Shawna Thorup, librarian.

The halls include several brightly colored seating nooks where students can study, read a book or just hang out while waiting for their next class.

The nursing laboratory, which doesn't open until June, isn't fully furnished yet. It will have 10 patient mannequins, including one for the obstetrics room that gives birth, said Carla Boyd, nursing education director.

The center's space, when combined with the main campus in Bentonville, means the college has the capacity to graduate up to 160 nurses annually, 40 more than now, Boyd said.

Hight Jackson Associates was the architect on the Washington County Center. Milestone Construction was the project contractor.

Larry Perkin, a partner with Hight Jackson, said the architects' goal wasn't only to meet educational needs, but to give the building a professional environment. He thanked Tirey for her work.

"That is a really difficult role to be in to raise money, especially in this community," Perkin said. "There's just a lot of competition for dollars up here. Her relationships really helped us to get to this point."

Becky Paneitz, college president from 2003 to 2013, visited the center for the first time Tuesday. Paneitz was involved in the early discussions of a Washington County building. It's everything she had hoped it would be, she said.

"I wish I could have stayed to finish this project. I couldn't because I had some other things happening. But it's just great to see that it happened anyway," Paneitz said.