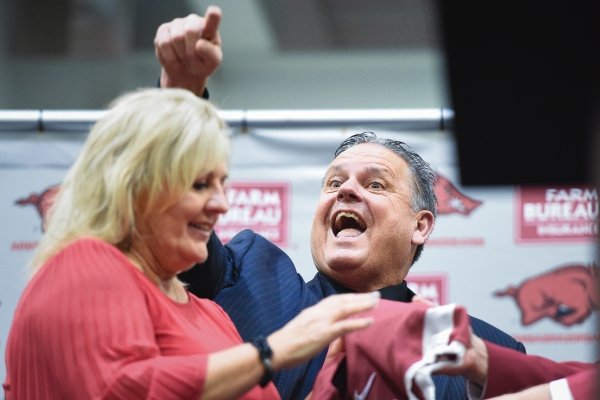 FAYETTEVILLE -- The coach who last led the University of Arkansas to conference championships in football and has the highest winning percentage in program history gave Sam Pittman his endorsement.

"I think Sam's a great choice," Ken Hatfield said of Pittman being hired as Arkansas' new coach. "I think Sam just needs a chance, and he'll do a great job."

Pittman has spent the past eight seasons as an offensive line coach at Tennessee, Arkansas and Georgia.

"I'm confident he'll build the program back up," Hatfield said. "He knows what it takes to win in the SEC."

Hatfield knows what it takes to win at Arkansas. His .760 winning percentage (55-17-1) is the highest by a Razorbacks coach, and he led Arkansas to back-to-back Southwest Conference championships in 1988-89.

"The formula for winning at Arkansas is everyone -- players, coaches, administrators, fans -- pulling together," Hatfield said. "I believe Sam can make that happen."

Hatfield, who sat in the front row of the crowd at Pittman's official introduction as coach at the Walker Pavilion on Monday, said he isn't concerned that Pittman's only previous head coaching experience is on the high school and junior-college levels.

Head coaches for whom Pittman has worked include Butch Davis at North Carolina, Bret Bielema at Arkansas and Kirby Smart at Georgia.

"Sam's been around a lot of great head coaches, and he's learned from them to help make him ready for this job now," Hatfield said. "But when you get the head coaching job, you've got to be your own man.

"Sam can't be Kirby or Bret or Butch. You can't be anybody else but yourself."

Steve Cox, a member of the Arkansas board of trustees, accompanied Athletic Director Hunter Yurachek and deputy athletic director Jon Fagg on job interviews with coaching candidates the past several days. Cox said he'd never met Pittman until last weekend, but that he has no question the Razorbacks hired the right coach.

"I'll just tell you this, we got the man we wanted," Cox said. "That's just the truth. This guy right here is the real deal. Just know that.

"Yeah, we talked to other people, but Sam is the guy we wanted. He's dynamic, he's smart, he's passionate and he's connected. "I feel better about Sam than anyone else we talked to -- I swear -- by far."

Marvin Caston, a former Arkansas player who is senior director of development for the Razorback Foundation, said he's had nothing but positive feedback about Pittman.

"I've probably heard from 300 people since Sam was hired, and it was all positive," Caston said. "I haven't gotten one negative comment. Everybody's fired up about Sam. They know the type of man he is and how hard he works.

"I'm absolutely ecstatic that Sam is our coach. He's a high-energy guy, tough, no nonsense, discipline. He's going to establish the line of scrimmage, and he's going to recruit like crazy. He can relate to our fan base."

Fagg is in his 11th year at Arkansas, so he knew Pittman from his time as a Razorbacks assistant coach from 2013-15

"We're super excited about having Coach Pittman back at Arkansas," Fagg said. "He's a guy that really has passion for our players, for our state, for our school. We wanted someone who really loves the Razorbacks and didn't want this as just a job, and I think that's what we got in Sam."

Dave Van Horn, who as Arkansas' baseball coach has led the Razorbacks to six College World Series appearances, said he was impressed by the mix of humor and emotion Pittman showed in addressing a crowd of fans Monday. He drew laughter and shed some tears.

"I appreciated seeing his emotion," Van Horn said. "You could tell there are a lot of feelings right now for him. He's probably running on adrenaline and hasn't gotten any sleep. I'm just glad we got someone who really wants to be here."

As Georgia's offensive line coach the past four seasons, Pittman worked with Bulldogs kicker Rodrigo Blankenship, who was in Springdale on Monday as a finalist for the Burlsworth Trophy.

"I talked to Coach Pittman several times a week because he coached our field goal units while he was here," Blankenship said. "He's a really amazing person.

"I have all the respect in the world for Coach Pittman, and I'm really happy for him and the great opportunity he's going to have coming his way at Arkansas. I know he's really going to be missed at Georgia."

Pittman is known as one of the nation's top recruiters.

"I think it's Coach Pittman's genuine care for his players," Blankenship said. "He cares for all the athletes he recruits far beyond anything that they might accomplish on the football field. He cares about them as people."

Cox, a former kicker for Arkansas and in the NFL, said he's excited about Pittman's ability to improve Arkansas' play on the offensive and defensive lines.

"Let me tell you, we'll play real football now," Cox said. "We'll get back to blocking and tackling."

"A lot of candidates told us what was wrong with the situation, but all Sam told us was what was right about Arkansas and why he was the right guy for the job," Cox said. "He has such great passion for Arkansas, and he's a great coach and a great recruiter. He's going to put a great staff together.

Hatfield said Pittman's background as line coach will be a major plus in helping the Razorbacks get competitive again.

"There's no doubt about it," Hatfield said. "You start there at the line of scrimmage. You look at most of the games, people still need to be able to run the ball and stop the run.

"It's about the fundamentals. Those things haven't changed."