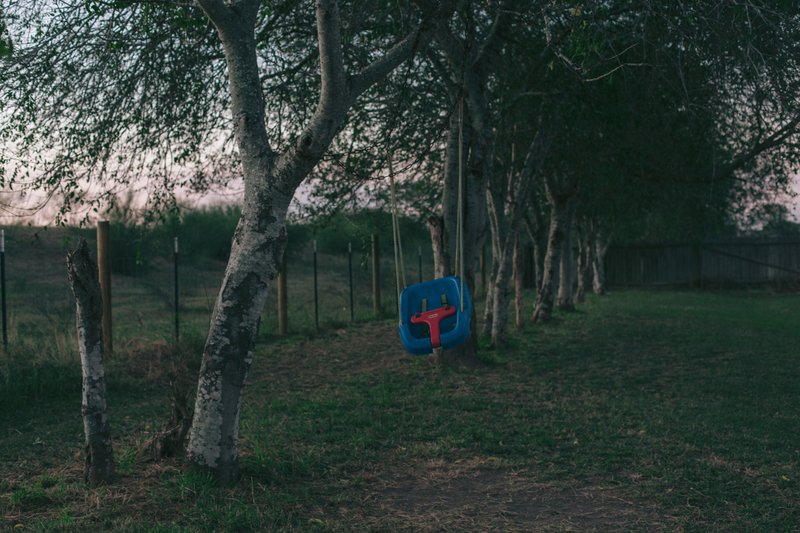 A swing sits in the backyard of Salvador Castillo and Yvette Arroyo's home next to the Rio Grande levee in Brownsville, Texas. MUST CREDIT: Photo by Brenda Baz&#x1ba0;for The Washington Post

BROWNSVILLE, Texas -- Salvador Castillo was yearning for tranquility when he became enchanted by a one-acre homestead close -- but not too close -- to the city, a place where cows graze beneath whispering mesquite trees on the property's edge.

Castillo, an Afghanistan war veteran, and his wife bought the home using military benefits and grew their family into their new neighborhood -- about half a mile from a bend in the Rio Grande.

They never imagined a border wall could dissect their property someday. But the first letter, stamped with an official government seal, arrived about a year ago. Their neighbors, the Carrascos and Trevinos, got them too.

"We were astonished," Castillo said, noting that the government letter basically sought unlimited access to his family land with no preclusions. His wife, Yvette Arroyo, threw the first letter away, but the lawsuit that came next was a bit more intimidating. "We were like, 'Hell no!' We don't like this. It's very intrusive."

President Donald Trump aims to build 166 miles of border barrier in Texas, almost all of it slated to go on private land that the government has yet to acquire -- thousands of parcels along the river, an unknown number of them occupied by their owners, including churches and single-family homes. No new border wall has been built on private land in Texas since the president took office, but land acquisition in the Rio Grande Valley is about to enter a new phase this week, as U.S. attorneys began filing initial petitions in court while making cash offers to property owners, according to Justice Department officials with knowledge of the process.

On Friday, the federal government filed its first land acquisition case to condemn nearly 13 acres of private property in the Rio Grande Valley, a parcel near the river levee in Hidalgo County. The owner was offered $93,449 in compensation for the land.

As the government pushes to accelerate construction of what Trump has promised will be a total of 500 miles of new barrier by the end of 2020, it is families like the Castillos, Trevinos and Carrascos that are in the way.

So far, the Trump administration has built about 85 miles of fencing, nearly all of it replacing older structures built before the president took office in 2017. The government broke ground on new border wall in the Rio Grande Valley on Nov. 1, but it was on land the government already controls.

The president has placed his son-in-law, Jared Kushner, in charge of the wall project, including the acquisition of private land. Kushner has urged the Army Corps and the Justice Department to expedite the process, and more recently has directed staff to begin building a centralized database of all the privately owned parcels along the border, according to two senior administration officials familiar with the effort.

The letters that landowners have been receiving are the first step in what can be a contentious process, with the government seeking "right of entry" to conduct surveys on the properties and unfettered access for 12 to 18 months. Most landowners consent at first contact and eventually sell, according to attorneys familiar with the eminent domain process.

A growing number of South Texans have not signed those letters and are facing federal lawsuits seeking access to their land. Some said in interviews that they have refused to sign because they have concerns about the process or oppose the border wall project.

The Brownsville neighbors, who are no fans of the wall, ignored the letters. One family threw it away. Then came the calls, the text messages and the visits from U.S. attorneys to their work and home.

"I stopped answering the door," said Arroyo, a teacher, of the multiple visits from lawyers, U.S. Border Patrol agents and Army personnel. "Going to battle against the federal government is not something we will win. But we are not going to take this lying down."

Assistant Attorney General Jeffrey Bossert Clark, of the Justice Department's Environmental and Natural Resources Division, said Congress authorized the Department of Homeland Security to acquire land, including by condemnation, "for the public purpose of protecting our nation's international borders from such threats as terrorism, human trafficking, drug trafficking and illegal immigration."

"When such takings become necessary, the government provides just compensation that is fair to both landowners and taxpayers," he said. "When landowners disagree with the government over valuation, there is a transparent, court supervised process for determining just compensation. The vast majority of these matters are resolved without litigation."

U.S. authorities have filed more than twice as many land-taking lawsuits in 2019 as they did in 2018, indicating that more people are objecting to the government's use of their land. The Texas Civil Rights Project, which is representing six border property owners pro bono, said the lawsuits signal that landowners are resisting. The nonprofit organization worked closely with activists to teach landowners that they are not obligated to sign their rights away, but many of the property owners cannot afford legal representation.

"These cases are just the tip of the iceberg," said Ricky Garza, an attorney with the civil-rights organization. "We don't know how many others are prepared to fight back."

Information for this article was contributed by Nick Miroff and Josh Dawsey of The Washington Post.