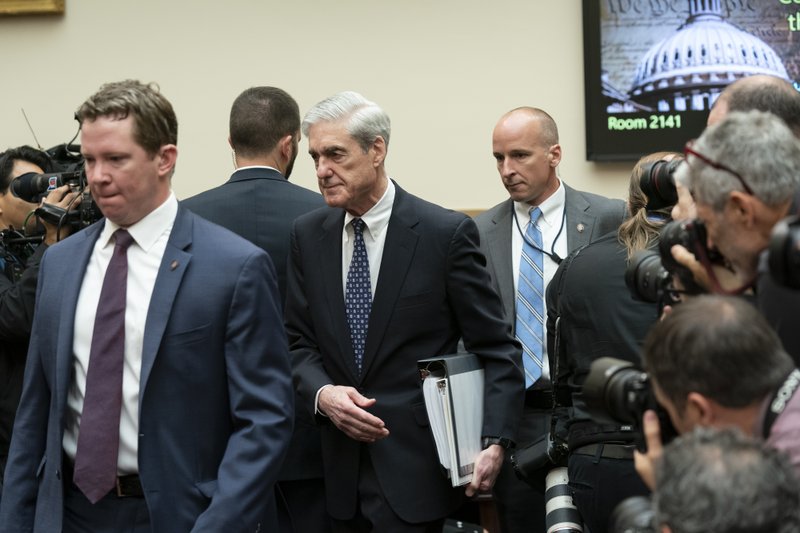 Escorted by a security detail, former special counsel Robert Mueller arrives to testify to the House Judiciary Committee about his investigation into President Donald Trump and Russian interference in the 2016 election, on Capitol Hill in Washington, Wednesday, July 24, 2019. Mueller told lawmakers he could not exonerate President Donald Trump of obstruction of justice and that the president's claims that he had done so in his report are not correct. (AP Photo/J. Scott Applewhite)

WASHINGTON -- The Justice Department's internal watchdog will release a report today that is expected to reject President Donald Trump's claims that the Russia investigation was illegitimate and tainted by political bias from FBI leaders. But it is also expected to document errors during the investigation that may animate Trump supporters.

The report, as described by people familiar with its findings, is expected to conclude that there was an adequate basis for opening the FBI investigation that Trump has denounced as a witch hunt. It began in secret during Trump's 2016 presidential run and was ultimately taken over by special counsel Robert Mueller.

The report comes as Trump faces an impeachment inquiry in Congress centered on his efforts to press Ukraine to investigate a political rival, former Vice President Joe Biden -- a probe the president also claims is politically biased.

Still, the release of Inspector General Michael Horowitz's review is unlikely to quell the partisan battles that have surrounded the Russia investigation for years. It's also not the last word: A separate internal investigation continues, overseen by Attorney General William Barr and led by a U.S. attorney, John Durham. That investigation is criminal in nature, and Republicans may look to it to uncover wrongdoing that the inspector general wasn't examining.

Trump tweeted Sunday: "I.G. report out tomorrow. That will be the big story!"

Trump previously has said that he was awaiting Horowitz's report but that Durham's report may be even more important.

Horowitz's report is expected to identify errors and misjudgments by some law enforcement officials, including by an FBI lawyer suspected of altering a document related to the surveillance of a former Trump campaign aide. Those findings probably will fuel arguments by Trump and his supporters that the investigation was flawed from the start.

But the report will not endorse some of the president's theories on the investigation, including that it was a baseless "witch hunt" or that he was targeted by an Obama administration Justice Department desperate to see Trump lose to Hillary Clinton in 2016.

It also is not expected to undo Mueller's findings or call into question his conclusion that Russia interfered in that election in order to benefit the Trump campaign and that Russians had repeated contacts with Trump associates.

Some of the findings were described to The Associated Press on condition of anonymity by people who were not authorized to discuss a draft of the report before its release. The AP has not viewed a copy of the document.

It is unclear how Barr, a strong defender of Trump, will respond to Horowitz's findings. He has told Congress that he believed "spying" on the Trump campaign did occur and has raised public questions about whether the counterintelligence investigation was done correctly.

The inspector general's investigation began in early 2018. It focuses in part on the FBI's surveillance of a former Trump campaign adviser, Carter Page. The FBI applied in the fall of 2016 for a warrant from the secretive Foreign Intelligence Surveillance Court to monitor Page's communications, with officials expressing concern that he may have been targeted for recruitment by the Russian government.

Page was never charged and has denied any wrongdoing.

Sen. Lindsey Graham, chairman of the Senate Judiciary Committee, which is scheduled to hear testimony from Horowitz on Wednesday, said he expected the report would be "damning" about the process of obtaining the warrant.

"I'm looking for evidence of whether or not they manipulated the facts to get the warrant," Graham, R-S.C., said on Fox News Channel's Sunday Morning Futures.

The warrant was renewed several times, including during the Trump administration. Republicans have attacked the procedures because the application relied in part on information gathered by an ex-British intelligence operative, Christopher Steele, whose opposition research into the Trump campaign's connections to Russia was funded by Democrats and the Clinton campaign.

The report also examined the interactions that senior Justice Department lawyer Bruce Ohr had with Steele, whom he had met years earlier through a shared professional interest in countering Russian organized crime. Ohr passed along to the FBI information that he had received from Steele but did not alert his Justice Department bosses to those conversations.