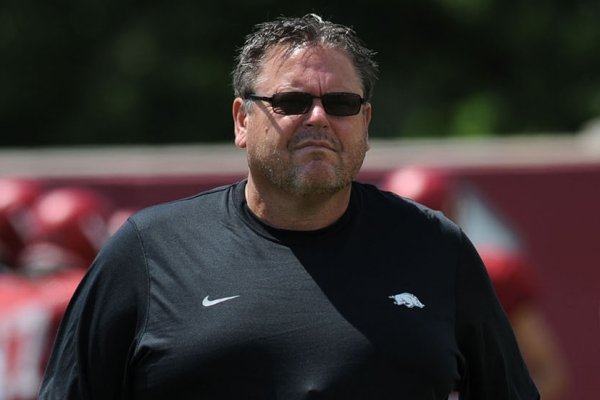 Pittman was hired as the offensive line coach at Arkansas under former coach Bret Bielema in 2013 before leaving for Georgia after the 2015 season.

Criswell, the 2019 Gatorade Arkansas Player of the Year, is an ESPN 4-star prospect and the No.11 dual-threat quarterback in the nation. He's looking forward to hearing from Pittman.

"He's a great recruiter," said Criswell, who talked to Pittman during the recruiting process at Georgia. "He'll check some boxes that Arkansas does not have checked right now. From what I hear, he was a good coach at Arkansas when he was there. Looking forward to having a conversation with him."

Tight end Allen Horace was committed to Arkansas before reopening his recruiting.

Horace, 6-5, 242 pounds of Crockett, Texas, picked Arkansas over scholarship offers from Nebraska, Baylor, Oklahoma State and Texas Tech in April. He opened his recruiting after the firing of Chad Morris as the Hogs' coach.

"I don't know enough about Coach Pittman to give you an honest answer," Horace said. "He seems to be well respected. If Coach Lunney and Coach Traylor stay, then that would be a good situation for me."

ESPN 4-star prospect Kelvontay Dixon, 6-0, 175, of Carthage, Texas, pledged to Arkansas in July and reopened his recruitment after the firing of Morris. He believes Pittman can turn the program around.

He reopened his recruitment after the Kentucky game on Oct. 12. Crawford said he's open to talking to Pittman.

Tight end Brandon Frazier, 6-7, 230, of McKinney (Texas) North, is a former Arkansas commitment that doesn't know Pittman but is looking forward to connecting with him.

"Don't know much about him, but I'll have to wait and see what all happens and who all is on the staff for me to take a visit possibly," Frazier said.

Defensive end commitment Jashaud Stewart, 6-2, 224, 4.61 seconds in the 40-yard dash, of Jonesboro is optimistic about Pittman.

"I'm very excited ready to see what he brings to the table," he said.

Twitter reaction from former Razorbacks was strong in favor of Pittman's hiring.

Former Arkansas receiver Jared Cornelius signed with Arkansas in 2014 while Pittman was on the Arkansas staff:

"Can't wait to see this program back on top again. Coach Pitman is the perfect man for the job! WOO PIG!!"

Senior offensive lineman Colton Jackson was recruited by Pittman and inked with the Hogs in 2015:

"God I hope these Pittman rumors are true!!"

Former Hog offensive lineman Dan Skipper was a member of Pittman's first recruiting class at Arkansas in 2013. He posted a photo of himself and the offensive line with Pittman after the Razorbacks defeated LSU 31-14 in 2015:

Former defensive back Kevin Richardson II walked on at Arkansas in 2013 and later earned a scholarship two seasons later while Pittman was on staff:

"Yesssirrrrrr, bring Coach Pittman back! Players would run through a wall for him, that's a fact, and he's a great recruiter!"

Former offensive lineman Johnny Gibson, Jr walked on at Arkansas in 2014 after playing at Dumas. He earned a scholarship after the 2016 season. He urged current players to give Pittman a chance:

"To all the players that think they want to leave... Don't"