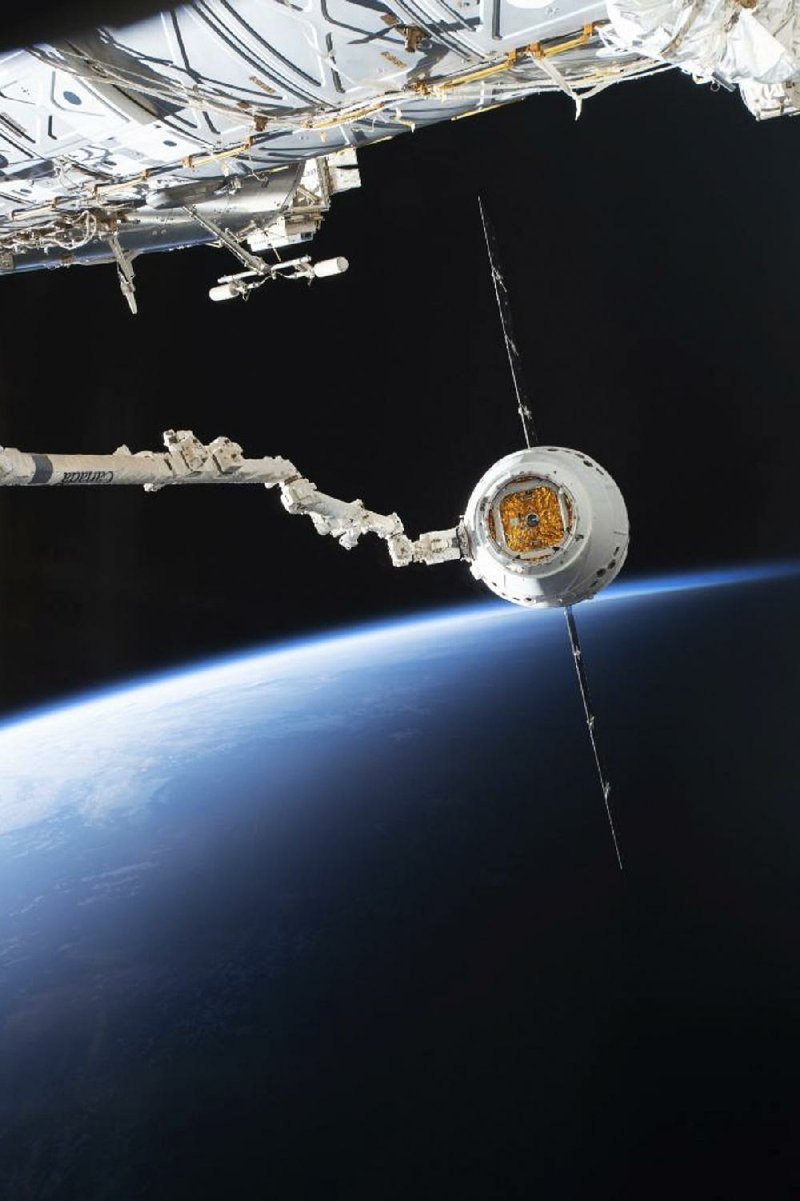 The SpaceX Dragon is shown arriving at the International Space Station on Sunday. It was the third visit to the station for the Dragon capsule, which arrived with 3 tons of supplies, including 40 mice for a muscle and bone experiment.

HOUSTON -- A suspect has been charged with capital murder in the fatal shooting of a Houston police officer who was responding to a domestic violence report, officials said Sunday.

The suspected gunman, Arturo Solis, was arrested without incident after a search, police said in a news release Sunday.

Houston Police Chief Art Acevedo said at the news conference that police received a call from a female victim who said her boyfriend was assaulting her and that he was armed with two firearms.

Brewster had got out of his patrol vehicle and was walking toward the woman when she pointed in the direction of the suspect, the release said. As Brewster turned toward him, the suspect opened fire and shot him multiple times, according to the release.

Brewster died about half an hour after the shooting, which Acevedo said was captured on body cameras.

The station commander, Italy's Luca Parmitano, used a large robot arm to grab onto the Dragon three days after its launch from Cape Canaveral.

It marks the third visit for this recycled Dragon. Flight controllers quickly secured the capsule to the orbiting lab, paving the way for the hatch to open and the unloading to begin.

The capsule holds 3 tons of supplies, including 40 mice for a muscle and bone experiment. Eight of them are genetically engineered with twice the normal muscle mass -- and so are considered "mighty mice."

The capsule also has a large, round robot head with artificial intelligence and the ability to sense astronauts' emotions. Named Cimon, it's an improved version of what flew up last year to be tested as an astronaut's helper.

The astronauts have another shipment coming today -- this one launched by Russia from Kazakhstan on Friday.

Synagogue sued by victim of shooting

POWAY, Calif. -- A man wounded in a shooting at a San Diego-area synagogue is suing the house of worship, alleging Chabad of Poway didn't use federal funds meant to hire security to protect worshipers, according to a newspaper report.

In the lawsuit obtained by the Los Angeles Times, Almog Peretz claims the synagogue did not have proper security despite a rise in anti-Semitic attacks nationally and that it did not use a $150,000 grant to upgrade safety measures.

Officials at Chabad of Poway did not immediately respond to a request from the Times seeking comment on the lawsuit.

Prosecutors have charged John Timothy Earnest with one count of murder and three counts of attempted murder in the April 27 attack at Chabad of Poway that killed one person.

In filing the lawsuit, Peretz said the synagogue breached its "duty of reasonable care" in protecting congregants, the Times said in its story Friday.

Chabad of Poway received $150,000 from the government in March because the synagogue "believed that it was at risk of an anti-Semitic attack on its congregants," according to the suit. But on the day of the attack, court documents show, the building's doors were unlocked and no guards, gates or other security measures were in place.