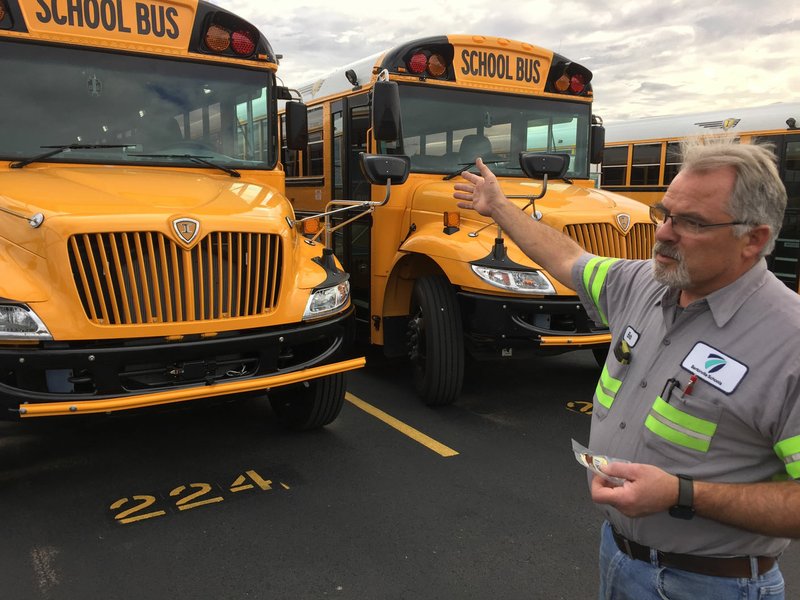 BENTONVILLE -- First-year revenue from advertisements on School District buses fell far short of projection, but administrators said they will continue the initiative.

The district put signs on eight buses last year with the message, "If you see something, say something," accompanied by the logo of a sponsoring business or organization.

The slogan is borrowed from the federal Department of Homeland Security to promote awareness of suspicious activity in and around schools.

Ad revenue was $12,375 for the 2018-19 school year, according to Deputy Superintendent Janet Schwanhausser. District officials said last year they expected the signs to raise about $175,000 in the first year and revenue would grow for at least several years to as much as $300,000 in year five.

The district used its ad revenue to purchase the Mobileye collision avoidance system for 12 buses. The system detects potential hazards and alerts the driver.

Joe Quinn, a School Board member, asked Schwanhausser at last month's board meeting for her thoughts about the relatively low ad revenue compared to projections.

"My thought is it doesn't cost me anything," Schwanhausser said. "And we put this (Mobileye system) on 12 buses."

Brent Leas, a board member, said he hasn't heard any complaints from constituents regarding the bus advertisements.

Arkansas began allowing school bus advertising in 2015 when legislation sponsored by state Rep. Dan Douglas, R-Bentonville, was signed into law. The legislation stipulated all revenue generated from bus ads be used for transportation purposes only.

Bentonville became one of the first school districts in Arkansas to put signs on its buses when the board authorized administrators to pursue the matter in April 2018.

Crosswalk Marketing, a Springdale company that specializes in bus signs, handles all aspects of the sign program. Crosswalk's cost to sponsor one bus with both sides branded is $2,500 for a school year, with 75% of the net revenue going to the district. Sponsors buying space on multiple buses get a discount, said Don Young, Crosswalk's co-owner.

Each sign -- which is a decal -- is 30 inches high by 60 inches wide, dimensions determined by the Arkansas Division of Public School Academic Facilities and Transportation. They are attached to the rear quarter panels of a bus.

Crosswalk and the district this month will replace the "See something, say something" signs with ones that tout the district's "Every Kid, Every Day" program, which raises money to cover meals for students who have insufficient funds in their lunch accounts.

A competition was held among students in Bentonville's Ignite program to design a new logo for the Every Kid, Every Day program. Students in Sarah Butcher's digital design and photography class came up with 20 ideas. The winning logo will be included on the bus signs, Schwanhausser said.

Crosswalk has sold sponsorships of the Every Kid, Every Day signs for seven buses so far, compared with the eight buses the district had for its first set of signs. Young stressed it's still early, however, and Crosswalk will continue pursuing sponsors through the first quarter of 2020.

The $175,000 projection for year one was the district's estimate, not Crosswalk's, Young said.

"It's not been as easy as people think," he said. With school bus advertising being relatively new to Arkansas, he added, "sponsors are a little reticent to jump in. But it's gone better this year."

The Bentonville district has about 160 buses. The Mobileye system will be installed on eight new buses just delivered, said Chris DeWitt, transportation director.

Mobileye detects other vehicles and objects in the road and alerts the driver. The system will apply the brakes if the driver doesn't do so in time, DeWitt said.

The system chirps if a driver changes lanes without using a turn signal, follows another driver too closely or exceeds the speed limit. It knows the speed limit by monitoring road signs.

"In essence, it helps the driver be a better driver," said Bob Blumhardt, shop maintenance manager in the district's Transportation Department.

Bentonville's buses run about 1.4 million miles per academic year. The district has an average of 17 bus accidents per year. Most of those accidents are minor, such as a bus backing into a mailbox, DeWitt said.