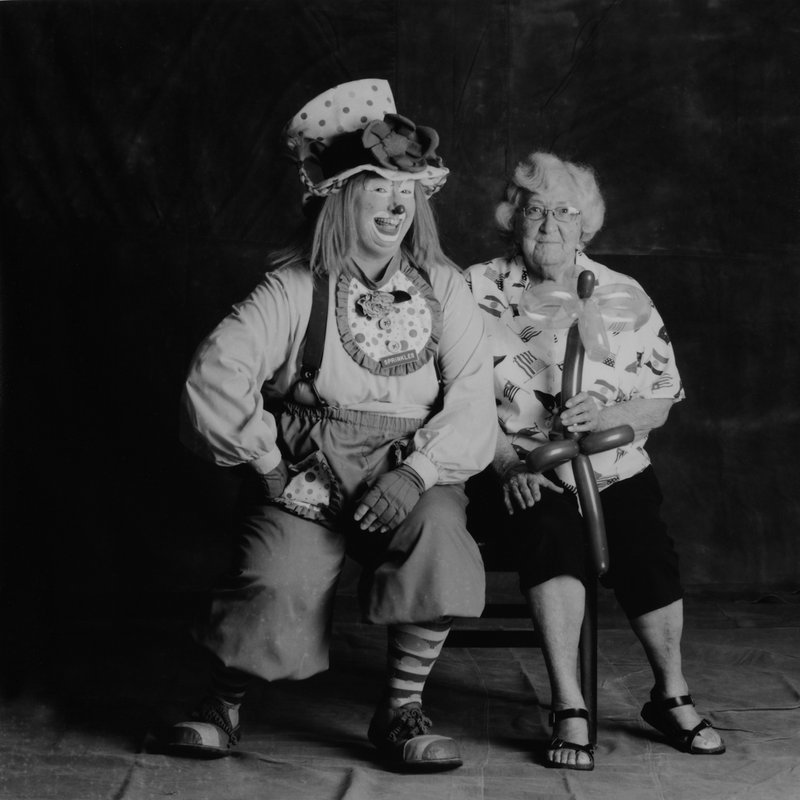 Photo by Don House; used by permission Sprinkles the Clown (Tania Tucker) and Reba Bolinger pose for Don House's camera at the Kingston Community Library in Newton County. The photograph is part of the "Remote Access Project."

"A Tuna Christmas" is set in a tiny town in the middle of nowhere, and that's most often where you'll find Don House and Sabine Schmidt -- making them a perfect artists for the Zephyr Blevins Gallery at Arkansas Public Theatre this December.

The photographers spend most of their time chronicling the lives of communities as reflected in their residents and their residences. And right now, that's happening in the form of the "Remote Access Project."

WHERE — Zephyr Blevins Gallery at Arkansas Public Theatre in Rogers

"For the past year and a half, we have been working on a series of photographs and essays about 20 to 25 of the smallest public libraries in the state," Schmidt recounts. "We research the places we want to include, send out inquiries to intrepid librarians in tiny towns, order many rolls of black-and-white (Don) and color (Sabine) film, cram photo and camping gear in whichever vehicle is running at the time, and go on road trips to see libraries, librarians, patrons and the communities in which they are located.

"After 11 such visits, we never cease to marvel at the energy and diligence of individual librarians and their power to change communities."

"This is also the first time I'm doing 'applied photography' with a specific assignment (that I gave to myself) instead of my usual approach of wandering, driving and roaming in search of photographs," Schmidt says. "Don has more experience with on-location, deadline-driven editorial and commercial work."

"In a way, the project is a continuation of my career-long approach to public portraiture, beginning with the Springfest series in 1986 -- setting up a backdrop and photographing anyone who walks by," House puts in. "This time, it's in a small space surrounded by books, but the method and the enjoyment are much the same."

"This is, first of all, a fine-art photo project, but what I've come to like about it almost as much as the work itself is the chance to see parts of my adopted home state that I didn't know about," Schmidt adds. "We're [currently] on the road to southern Arkansas, where we will visit four towns -- Horatio, Tollette, Stamps, Norman -- and their public libraries.

"We're about halfway done with the photography part," she continues. "Early next year, we should wrap up the post-production work and move into the writing part. We are lucky to be working with Robert Cochran, author, professor and director of the Center for Arkansas and Regional Studies at the University of Arkansas, who will be writing the introduction to the book, and with Mike Bieker and his staff at the University of Arkansas Press, who will design and publish it.

"While we both have collaborated with individual artists over the years, the last couple of years have been unusual as we work on such an intense, long-lasting project together," Schmidt muses. "Beginning such a collaboration is in many ways just like starting a relationship, with all the attending pleasure and anxiety."

"Still, no matter what else is going on, when we get that strong mental visual of an image that needs to be created, we can't stop until it's on film," House concludes. "Several of the photographs on display at the theater this month are good examples."