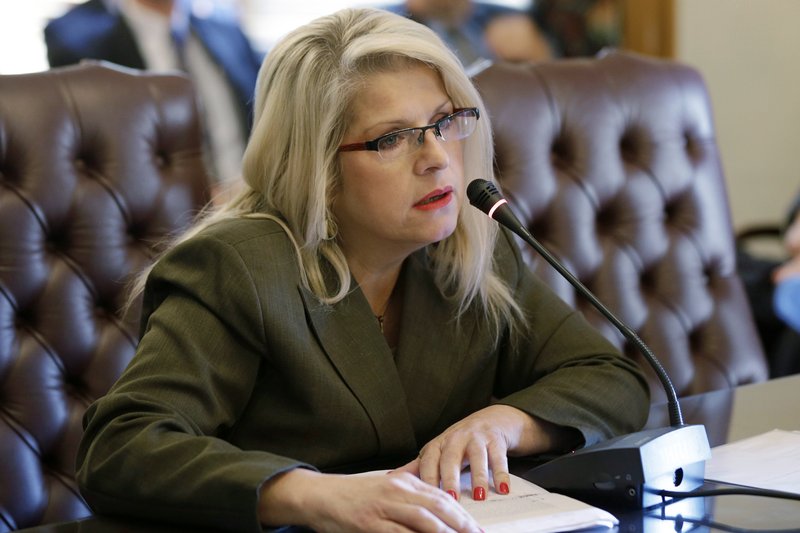 FILE - In this Jan. 28, 2015 file photo, Sen. Linda Collins-Smith, R-Pocahontas, speaks at the Arkansas state Capitol in Little Rock, Ark. Prosecutors say they plan to seek the death penalty against Rebecca Lynn O'Donnell, charged with killing former lawmaker Collins-Smith, who was found dead June 4, 2019 outside her own home. Prosecutor Henry Boyce on Tuesday, July 30 told the Arkansas Democrat-Gazette his office would formally announce its plans at an arraignment and plea hearing for O'Donnell, who's been charged with capital murder. (AP Photo/Danny Johnston, File)

The prosecutor trying the murder case against the Randolph County woman accused of killing former state Sen. Linda Collins unexpectedly asked to quit this week, after a similar request made by a judge assigned to the case.

Third Judicial Circuit Prosecuting Attorney Henry Boyce was relieved by an order signed by Circuit Judge John Fogleman on Wednesday, according to a copy of the document provided by the circuit clerk's office. Fogleman himself was assigned to the case Nov. 26 after the previous judge, David Goodson, asked to be removed for unknown reasons.

Boyce did not return multiple messages seeking comment on Thursday and Friday.

Boyce's office filed capital murder and other charges against Rebecca O'Donnell in June over Collins' slaying. O'Donnell was a friend and former campaign aide to the Republican ex-senator, though no motive has been revealed.

O'Donnell has pleaded innocent to all charges.

The one-page order signed by Fogleman does not indicate a reason for Boyce's request to be removed. The Randolph County circuit clerk's office said no written request was filed with the court.

The last hearing in the case was held Nov. 22 in Pocahontas, at which Goodson scheduled the case for a trial next October.

Days later, Goodson requested to be removed from the case. When contacted by a reporter, he declined to say why.

Fogleman's appointment by the Arkansas Supreme Court last week made him the fourth judge to hear matters related to Collins' death.

Goodson, a retired judge from the neighboring 2nd Circuit, was assigned to the case in June after all the judges in the 3rd Circuit recused, although two judges on the circuit had heard preliminary matters before stepping down. Collins' ex-husband, Philip Smith, had been a judge on the circuit. (During her two terms in the Legislature, Collins went by the surname Collins-Smith.)

Boyce's office, however, had remained on the case since it was filed. No new prosecutor was immediately assigned.

In September, Boyce filed to run for a district court judgeship in nearby Jackson County. If elected to the position, Boyce would begin serving in January 2021, after O'Donnell's scheduled trial.

Lee Short, O'Donnell's attorney, did not respond to a message seeking comment Friday.

According to an affidavit released in July, police said O'Donnell was filmed removing security cameras from the former lawmaker's home on May 28. That was the last day Collins was seen alive.

Collins' body was found by her son and her father at her home in Pocahontas on June 4. Police said the body was wrapped in a blanket and covered by a tarp, and that Collins had been stabbed to death.

O'Donnell was arrested June 14, while on her way to Collins' visitation service.