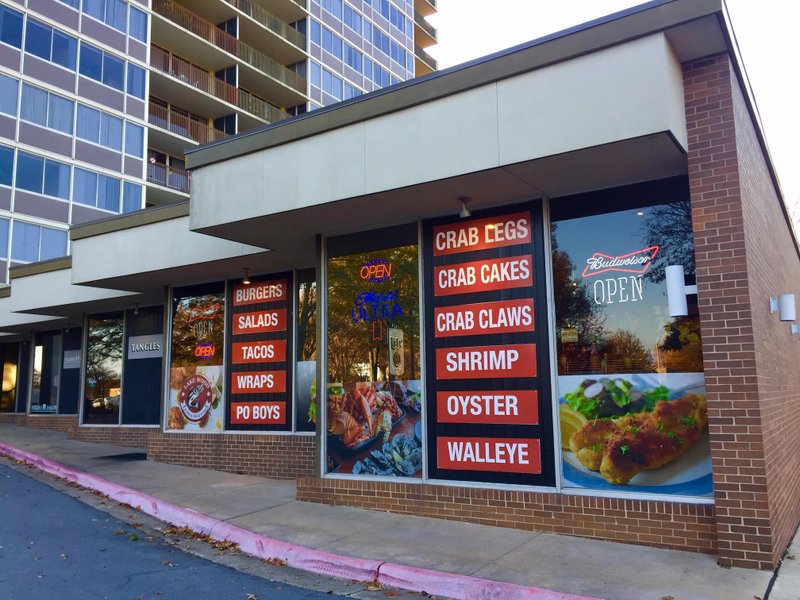 Lakewood Fish &amp; Seafood House has taken over the former Lakewood Lounge on the ground floor of the Lakewood House Apartments on North Little Rock's North Hills Boulevard. Special to the Democrat-Gazette

The revolving door has revolved again at 250 E. Military Road at MacArthur Drive, North Little Rock, with the closure of Mama D's Diner Nov. 24, only half a year after it opened in May. In a post on the restaurant's Facebook page (facebook.com/Mama-Ds-841316442903082), the owners reported that "With sad and heavy heart we have to close our doors today," thanking patrons "especially the Amboy community and the Camp Robinson personnel," and expressing hope that they could "open another in the future if we are given another opportunity."

The diner offered traditional diner items but also Asian-style fried rice and stir-fried noodles, plus a menu listing that helped the restaurant briefly go "viral" via print, broadcast and social media: The $4.25 "My Girlfriend Is Not Hungry" add-on that offered extra fries and a choice of chicken wings or fried cheese sticks. A picture of the menu listing was shared thousands of times on social media and was featured in national media from CBS News to the New York Post. The bump in business it may have provided didn't last; we noted in a recent review that only a handful of tables were occupied at various mealtimes.

Predecessors in the archetypal diner building include Beautiful KreationZ Homestyle Cooking, Gail's Diner, the mercurial Hunka Pie and at least two incarnations, over nearly two decades, of the Starlite Diner.

We'd been getting unconfirmed reports that work was going on at the former Casey's Bar-B-Q/Arkansas Burger Co. space at 7410 Cantrell Road, Little Rock. Signs have now appeared proclaiming, "Coming in January, Hubcap Burger Co." And in case you wonder if there's a connection to Cotham's, where the hubcap cheeseburger is the specialty of the house, yes there is. Right there in the logo: "Hubcap Burger Co. by Cotham's." The original Cotham's Mercantile in Scott burned down in May 2017; Cotham's in the City continues to carry the Cotham's flag at 1401 W. Third St. in Little Rock.

Today is the grand opening of the Louisiana-based Raising Cane's Chicken Fingers outlet at 4311 E. McCain Blvd., near Smokey Lane, North Little Rock. Doors will open at 10 a.m., but grand opening festivities start at 8:30 a.m. with the chance for "Caniacs" — as the chain's fans have been labeled — to enter a 9-10 a.m. "Lucky 20" drawing, through which 20 customers ages 13 and older will get free Cane's items for a year. (You must be present to win; find the official rules at raisingcanes.com/lucky20rules.) In addition, the first 100 dine-in customers 13 and older who buy a combo meal will receive a Raising Cane's T-shirt and a free Box Combo for their next visit. North Little Rock High School cheerleaders and band members will be rousing the crowd. North Little Rock Mayor Joe Smith is also expected to attend. Hours are 10 a.m.-11 p.m. Sunday-Thursday, 10 a.m.-midnight Friday-Saturday. The phone number is (501) 945-8068.

Red Snapper, with the logo "subtitle" "Fish. Chicken. Grill" has opened in the former Planet Smoothie spot at 102 Markham Park Drive, Little Rock, next-door to AR Donuts. One of our eagle-eyed readers did a little research and turned up a restaurant with a similar name and logo in Memphis — 2636 Frayser Blvd.; (901) 779-8092; redsnappermemphis.com — and restaurants with similar names in Atlanta (Red Snapper Seafood Restaurant) and several in Chicago (Red Snapper Fish & Chicken), with different logos. Hours here are 10 a.m.-10 p.m. Sunday-Thursday, 10 a.m.-11 p.m. Friday-Saturday. The phone number is (501) 615-8486; the Facebook page is Facebook.com/RedSnapperAR.

And speaking of seafood, the folks at the Lakewood Fish & Seafood House, which took over — with new owner (Jim Greer) and a new menu — in the former Lakewood Lounge, on the ground floor of the Lakewood House Apartments, 4801 North Hills Blvd., North Little Rock, say they've now sufficiently settled in, with operating hours 11 a.m.-9 p.m. Tuesday-Saturday. The phone number remains (501) 758-4299; the website is lwfsh.com; the Facebook page is facebook.com/LakewoodSeafoodHouse. 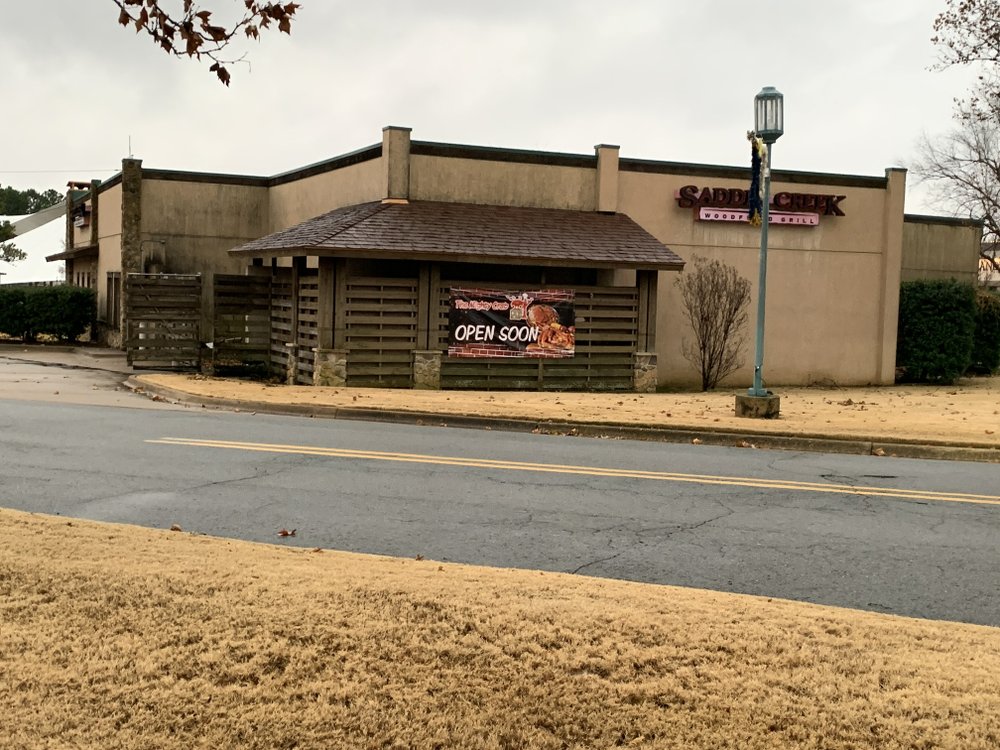 And still speaking of seafood, a sign on the rear of the former Saddle Creek, Lakewood Village, 2703 Lakewood Village Drive, North Little Rock, proclaims that The Mighty Crab is "coming soon" to that location. No further information is immediately forthcoming; we did do a little checking and found a Mighty Crab in Jackson, Miss., and website, mightycrabjackson.com.

And while we're on the subject of seafood, if you needed any additional evidence of the closure of The Capital's Seafood House, 1706 W. Third St., Little Rock, you'd find it in the cleaning out of the interior, including the tables and chairs and even the light-up "closed" sign in the window. The phone number, (501) 214-1441, has only returned a busy signal for about a week and a half.

Diablos Tacos & Mezcalaria is now open at 300 President Clinton Ave., at the confluence with LaHarpe Boulevard at the western edge of Little Rock's River Market District. It's the Little Rock offshoot of Diablos Tacos & Mezcal, an upscale Mexican restaurant that opened in February at 528 Central Ave., Hot Springs. The 5,500-square-foot space started out as the "Rumba" restaurant half of Rumba & Revolution, and most recently housed the very short-lived Live Life Chill. Partner and general manager Antonio Gonzalez described it in August as a "new concept in Arkansas ... pairing mezcal and a good selection of wine with the best of Mexico and Mediterranean food." The menu focuses on "urban" tacos and tapas, the latter based on olive oil, wine, bread and cheese. (Check it out at diablostacosandmezcal.com.) Hours are 11 a.m.-10 p.m. Sunday-Thursday, 11 a.m.-11 p.m. Friday-Saturday. The phone number is (501) 500-2323 (instead of a ring tone, we got several bars of "The Hall of the Mountain King" from Edvard Grieg's Peer Gynt before somebody answered it). The Facebook page is at tinyurl.com/yy2ujfpp.

And the Department of Arkansas Heritage reports receiving a record number of nominations for its Arkansas Food Hall of Fame — more than 1,450 in five categories, more than double last year's count, and, for the second year in a row, from all 75 Arkansas counties. The Food Hall of Fame Committee, consisting of food professionals and foodies, will announce the finalists Jan. 27 and the winners Feb. 24 at an induction ceremony, 5:30-8 p.m., at the Ron Robinson Theater in downtown Little Rock. Visit tinyurl.com/vcdln4e.