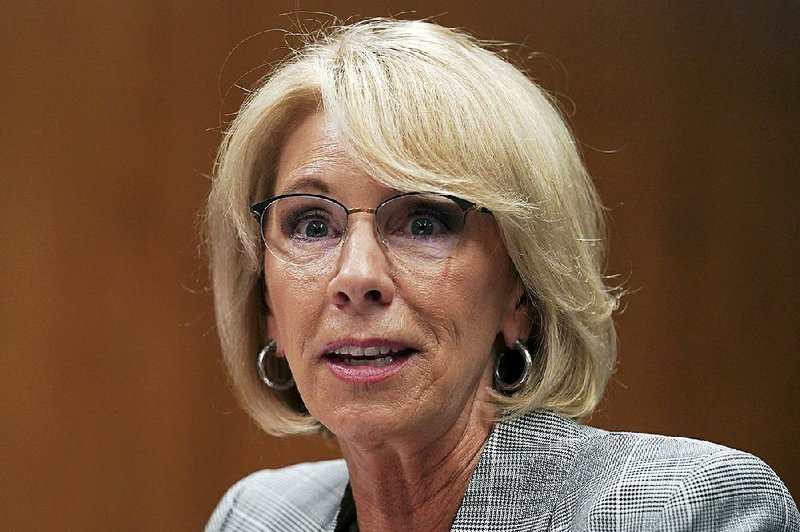 The Education Department revealed in a court filing this week that it identified an additional 29,000 former Corinthian Colleges students who were pursued for federal student loan payments despite a court order barring collection.

A federal judge held Education Secretary Betsy DeVos in contempt and fined the department $100,000 in October after the agency said it attempted to collect payments from 16,000 former students of the defunct for-profit college in violation of the order.

Magistrate Judge Sallie Kim of the U.S. District Court in San Francisco requested monthly status reports on the department's efforts to rectify the harm it inflicted upon borrowers, some of whom had their wages garnished or tax refunds seized. In its latest report, the department said it discovered far more people were affected by its actions.

Of the 29,000 newly identified borrowers, 550 lost wages or tax refunds because of the collection practice, while 5,000 were hit with negative marks on their credit reports. The Education Department has yet to refund all the money collected, according to the court filing.

In the court report, the department said a more thorough review "revealed that an isolated miscommunication between [the Federal Student Aid office] and its [loan] servicers and other logistical issues caused this underestimate in the number of impacted borrowers."

The Federal Student Aid office, according to the report, "has corrected the miscommunications with the loan servicers and developed systems to ensure borrowers stay in the correct repayment status."

Education Department spokeswoman Angela Morabito said the agency has taken steps to prevent further mistakes, including putting a new team in charge of overseeing loan relief claims from borrowers who say they were defrauded by their colleges. That team, she said, is conducting "a top-to-bottom review" to ensure no other Corinthian students were inadvertently targeted for collection.

"The Department takes seriously both our responsibility to student borrowers, our customers, and our obligation to the court," Morabito said. "At Secretary DeVos' direction, [the Federal Student Aid office] took action to fix any harm done to students and made changes to help prevent future errors. It is also important to remember that [Federal Student Aid] would have already processed all of these claims if the courts had acted on the long-pending appeal."

Attorneys for the borrowers are angry over the department's latest revelation, with lawyers continuing to receive stories from former Corinthian students about how the collection has affected their lives. Some who lost wages said they were forced to borrow money from family or cover basic expenses with high-interest credit cards, had utilities cut off, or faced eviction.

"Students and taxpayers should be infuriated by the Department of Education's complete disregard for student borrowers," said Toby Merrill, director at the Project on Predatory Student Lending, a legal-aid group representing the students. "It is galling, it's unlawful and it can't be tolerated."

A 1995 law known as "borrower defense to repayment" gives the Education Department authority to cancel the federal debt of students whose colleges misled them about graduation or job placement rates to get them to enroll. The closure of Corinthian, a chain felled by charges of fraud and predatory lending, ushered in a flood of claims at the Education Department.

The case is rooted in DeVos' decision in December 2017 to provide debt relief to former Corinthian students by comparing the average earnings of students in similar vocational programs. That earnings information was collected under the gainful-employment regulation, which penalizes career-training programs for producing too many graduates with more debt than they can repay.

The Project on Predatory Student Lending at Harvard University and the Housing and Economic Rights Advocates sought an injunction in March 2018 to stop the practice. They argue the Education Department has no right to use the data, which is supplied by the Social Security Administration, for any purpose other than to evaluate vocational programs.

Kim agreed that the Trump administration violated privacy laws by using Social Security Administration data to calculate loan forgiveness. She banned the Education Department from using the earnings data to grant partial student debt relief to Corinthian students and halted collection on their loans. Kim had put a hold on the case until the court could determine the proper course of action, but she lifted that stay in October, allowing the case to proceed.