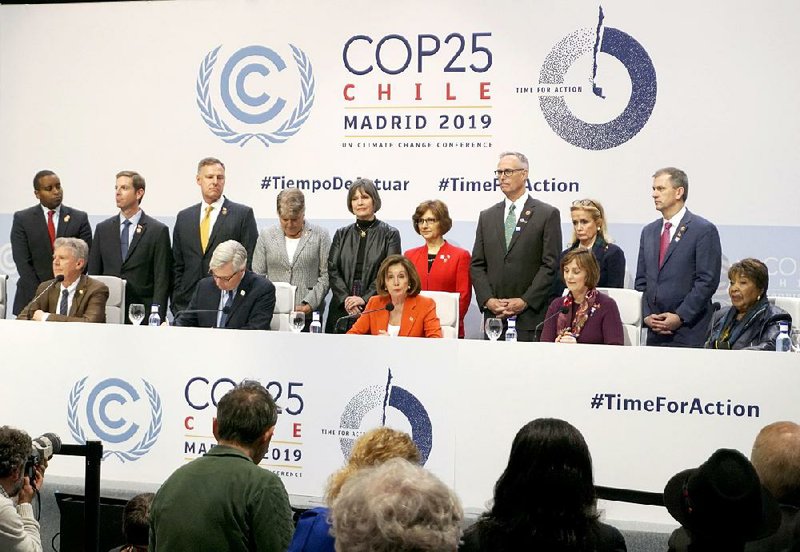 WASHINGTON -- President Donald Trump is aiming to make the annual U.N.-sponsored climate talks underway in Madrid the last ones for full participation by the United States, which is the world's No. 1 economy and the second-biggest carbon emitter.

Trump is due to complete the U.S. withdrawal from the landmark Paris global climate accord on Nov. 4, the day after next year's U.S. presidential election.

House Speaker Nancy Pelosi, D-Calif., and other political and business leaders, scientists and activists are traveling to Spain this week and next to drive home a counter message: U.S. cities, states and businesses representing a sizable chunk of the U.S. population and economy are committed to a global effort to slash emissions.

"We're still in it," Pelosi told reporters at the talks, where she appeared with 14 other congressional Democrats on Monday to call climate change a growing threat to public health, the economy and national security in the U.S.

Her comments were echoed by Mandela Barnes, Wisconsin's lieutenant governor.

"Regardless of whether or not we have the support of the nation's highest office or not, this work is going to get done," Barnes said.

The climate talks come as a new study found that the computer models used to simulate what heat-trapping gases will do to global temperatures have been pretty spot-on in their predictions.

After years of hearing critics blast the models' accuracy, climate scientist Zeke Hausfather decided to see how good they have been. He tracked down 17 models used between 1970 and 2007 and found that the majority of them predicted results that were "indistinguishable from what actually occurred."

"By and large our models have gotten it right, plus or minus a little bit," said Hausfather, a University of California, Berkeley scientist who is climate and energy director at the Breakthrough Institute. "If they get it wrong, it's slightly on the warm side, but I wouldn't read too much into that."

Ten of the 17 were close to the temperatures that actually happened, said Hausfather, lead author of a study published Wednesday in the journal Geophysical Research Letters.

But scientists actually got the physics right even more than that, Hausfather said. That's because they make two main assumptions when they model what will happen in the future.

One is the physics of the atmosphere and how it reacts to heat-trapping gases. The other is the amount of greenhouse gases put into the air.

A few times, scientists were wrong in their predictions about the growth of carbon pollution, saying there would be more of the gases than there actually were, Hausfather said. If they got the amount of heat-trapping gases wrong, they then got the temperatures wrong.

So Hausfather and colleagues, including NASA climate scientist Gavin Schmidt, looked at how well the models did on just the pure science, taking out the emissions factor. On that count, 14 of the 17 computer models accurately predicted the future.

This year's conference is expected to focus on fine-tuning the rules for reducing fossil fuel emissions by the roughly 200 signatories of the Paris agreement. It comes ahead of a big push at next year's climate summit for more ambitious emissions-cutting targets.

"The international community has concluded the United States is an unreliable partner," Purvis said.

Advocates of the Paris accord say the U.S. withdrawal will leave American businesses to compete internationally under carbon-cutting rules set by other countries.

Secretary of State Mike Pompeo last month repeated Trump's argument that the Paris accord was an economic burden for the United States.

Pompeo said technological innovation and the free market have made for continued U.S. declines in climate-changing emissions.

It's true that U.S. carbon emissions are still falling under Trump, according to a study by Global Carbon Project, a group of international scientists who track emissions.

The United States saw emissions drop 1.7% from 2018 to 2019, the same decline as in the European Union, even as China led in a 0.6% rise in emissions globally over the past year, the study said.

"We have to be all in," Frisch said. "We also need the federal government, to get where we need to go."

Information for this article was contributed by Frank Jordans, Seth Borenstein and Hannah Fingerhut of The Associated Press.