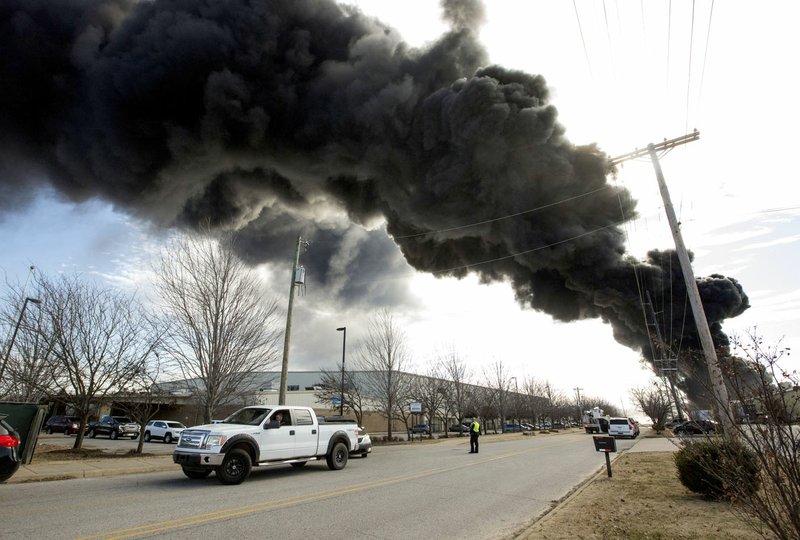 NWA Democrat-Gazette/BEN GOFF @NWABENGOFF Employees evacuate from a Walmart facility under a cloud of smoke Wednesday, Dec. 4, 2019, as firefighters battle a blaze at United Industries UltraBoard in Bentonville.

BENTONVILLE -- A massive fire at an industrial site near downtown Wednesday poured thick, black smoke into the sky for hours, but caused no injuries, according to city officials.

The potential for harmful particles in the smoke, however, concerned state, local and school officials. The Arkansas Department of Environmental Quality sent an inspector to monitor the air. Some surrounding buildings were evacuated and schools kept students inside.

The fire, reported about 11:30 a.m., was in a storage area just outside the United Industries UltraBoard manufacturing plant at 1900 E. Central Ave. The company makes foam products.

Firefighters contained the fire in about 90 minutes, although heavy smoke and flames continued for over an hour.

[Video not showing up above? Click here to watch » https://www.youtube.com/watch?v=XnwPx93Wa6M]

Firefighters' primary concerns upon arrival were some vertical tanks containing polystyrene -- plastic used in the manufacture of foam products -- and a 35,000-gallon, highly flammable tank of difluoroethane with the potential to create a large explosion, said Kevin Boydston, deputy fire chief.

"It could have been a lot worse had the crews not been able to protect those highly flammable tanks and barrels and keep it out of the building," he said.

There was some damage to the building's interior, but the building remained intact, he said.

Stacks of pallets and polystyrene pellets comprised most of what burned. The cause of the fire is under investigation.

[Video not showing up above? Click here to watch » youtube.com/watch?v=aNLal2ev-2I]

Burning polystyrene typically puts a lot of carbon monoxide into the air, so emergency responders wanted to keep people out of the smoke, which was drifting east. The smoke could be seen in Fayetteville.

The Bureau of Alcohol, Tobacco, Firearms and Explosives is expected on site today to assist with the investigation, Boydston said.

It probably will be next week before officials can determine a damage estimate, he said.

Firefighters from Rogers and Bella Vista joined about 25 Bentonville firefighters at the scene. Rogers Fire Chief Tom Jenkins said his department sent three trucks to help. Jenkins was at the scene and called the fire "sizable."

Bella Vista sent a fire engine and ambulance to the scene, said Cassi Lapp, a spokeswoman for the city.

Bentonville Fire Department officials happened to be meeting Wednesday with representatives of drone companies, who accompanied firefighters to the scene. Using the thermal cameras attached to the drones, they relayed information to firefighters to attack the fire, Boydston said.

"It's all about trying to help as much as possible," said Vladimir Goforth, systems specialist with Unmanned Vehicle Technologies of Fayetteville. "That was a huge fire, and we were able to help them target the areas it was hottest and get water to it and defuse it at a pretty accurate rate."

[Gallery not showing up above? Click here to watch » nwamedia.photoshelter.com/gallery/Bentonville-United-Industries-fire-12-4-2019]

United Industries was receiving an unusually high volume of calls Wednesday, according to an automated phone message, and no one could be reached for comment. An email to Mark Ferm, chief executive officer, wasn't returned.

The Walmart MLK Building, just east of United Industries, lost electricity and was evacuated, according to a Walmart spokeswoman. The building houses Walmart's layout center, where employees test mock displays to understand how to best showcase items in stores. The spokeswoman didn't immediately know how many people work in the building.

Walmart's other buildings in the vicinity, including distribution centers, a truck shop, employee discount store and a Neighborhood Market, weren't affected, the spokeswoman said.

Dylan Shaddox of Bentonville works at the Sam Walton Development Center near the fire. Shaddox said at 11:33 a.m. Wednesday he was working and his crew told him about smoke outside the building.

"I walked out and the power went off, then I saw this huge billow of smoke and I saw the flames," he said. "I didn't know how close it really was. I started taking pictures."

He heard three or four explosions after firefighters arrived.

Shaddox said he and his co-workers stood and watched the fire. Shaddox, who lives in the downtown area, said he went home and his electricity was off.

Griffin said the power outage was related to the fire because a substation just south of the fire had to be shut down. About 3,600 customers were without power at the peak of the outage, but all electricity was restored within two hours, she said.

Benton County Clerk Betsy Harrell said the County Administration Building, about a mile west of the fire, lost power for more than 30 minutes.

The Bentonville and Rogers school districts kept some students inside Wednesday because of the smoke, according to the districts.

Leslee Wright, director of communications for the Bentonville School District, said Washington Junior High School and Apple Glen Elementary School, both near the fire, weren't evacuated. Both schools, along with Old High Middle School and Baker Elementary School, lost power for a while, but it was restored by 1:30 p.m., she said. 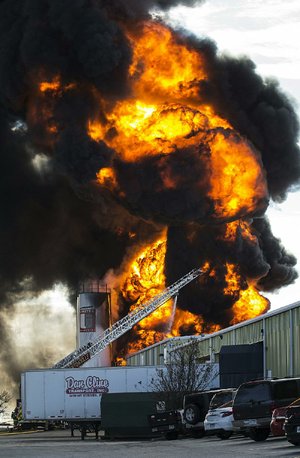 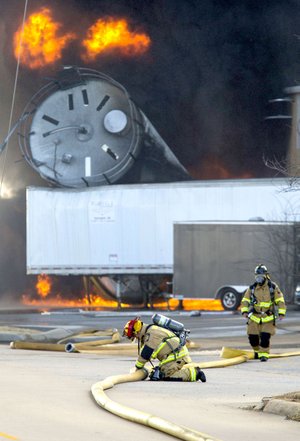 NWA Democrat-Gazette/BEN GOFF @NWABENGOFF A tank used to store styrene lies on the ground after collapsing Wednesday, Dec. 4, 2019, as firefighters battle a blaze at United Industries UltraBoard in Bentonville.

A map showing the location of the fire