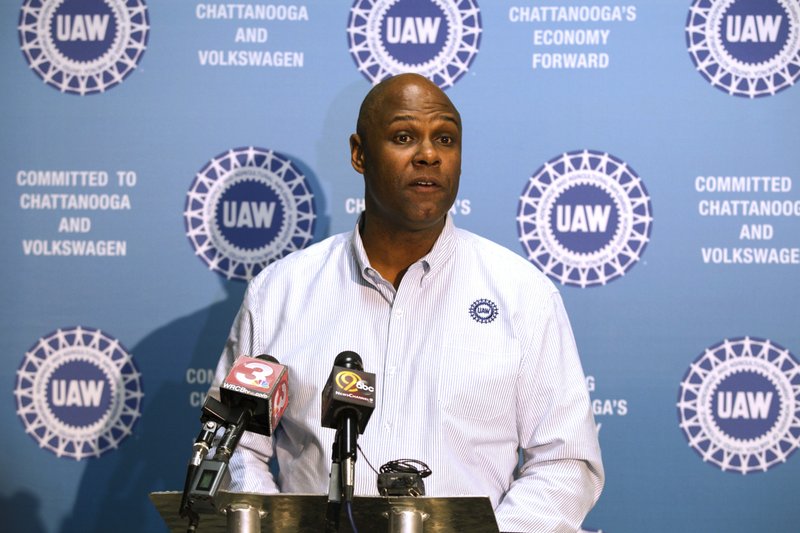 FILE - In this Dec. 4, 2015, file photo Ray Curry, a regional director of the United Auto Workers, speaks in Chattanooga, Tenn. The UAW union has replaced its auditing firm, added four internal auditors and has hired a big accounting firm to study its financial controls in an effort to prevent embezzlement and bribery discovered in a federal probe of the union. The moves announced Monday, Dec. 2, 2019 by Secretary-Treasurer Curry come after last month&#x2019;s resignation of President Gary Jones, who has been implicated in the scandal. (AP Photo/Erik Schelzig, File)

DETROIT -- The United Auto Workers union has replaced its auditing firm, added four internal auditors and hired a big accounting firm to study its financial controls in an effort to prevent a repeat of the embezzlement and bribery discovered in a federal probe of the union.

The moves announced Monday by Secretary-Treasurer Ray Curry come after last month's resignation of President Gary Jones, who has been implicated in the scandal.

Several other union officials have been charged or implicated in the probe, which embarrassed union leadership and angered many of its 400,000 members when it became public starting in 2017.

Curry said the changes will put checks and balances in place to prevent financial misconduct.

"This top-to-bottom assessment of our financial and accounting procedures and policies will result in a stronger and more stringent financial oversight of all expenditures," Curry said in a statement Monday.

The new auditing firm -- Calibre CPA Group of Bethesda, Md., which specializes in labor union accounting -- will check the UAW's finances for the past year. In addition, the Deloitte accounting firm will look into accounting and financial processes.

The scandal exposed weak financial controls at the union, which allowed a bribery scandal involving the Fiat Chrysler-UAW joint training center. Also exposed was the embezzlement of hundreds of thousands of dollars in the purchase of 58,000 watches for union members by the UAW-General Motors training center, as well as a scheme at a union regional office in St. Louis involving the purchase of thousands of dollars of expensive cigars and alcohol, golf greens fees and rental of swanky villas for union leaders. Funds allegedly were falsely represented as regional conference expenses.

Matthew Schneider, the U.S. attorney in Detroit who is heading the UAW investigation, told reporters Monday that the union isn't fully cooperating, and said federal oversight including a takeover is possible.

"We're not focusing on that per se. It is an option," Schneider said.

Another option is having union leaders picked by direct election of members, rather than the current vote of delegates at a convention, he said.

Authorities will make a decision on a takeover or other government action after all the criminal cases are resolved, Schneider said. Authorities could also talk with the union and work out changes, he said.

Authorities learned new information in union charges filed to oust Jones and Vance Pearson, a regional director in St. Louis, Schneider said. But the union didn't report that to authorities, he said.

Schneider wouldn't comment on how long the investigation might take or whether more criminal charges are coming.

UAW spokesman Brian Rothenberg said that Rory Gamble has made improvements after just three weeks as acting union president. The union is cooperating and turning over all records requested by the government, he said.

"The UAW has, as recently as last week, expressed a willingness to further work with the government on the issues of concern. And we continue to cooperate in providing the government any and all records requested," he said.

Stronger financial controls can help, but they can be evaded, so they must come with cultural changes at the union, said Shivaram Rajgopal, professor of accounting and auditing at Columbia Business School.

"It's pretty easy to get around controls," he said. "Culture is what you do when nobody is looking."

Rajgopal said it's likely that fraudulent expense reports went to lower-level people in the UAW accounting department, who probably suspected something was amiss. But lower-level workers have to worry about keeping their jobs if top officials are involved, he said.

Under the changes announced Monday, the union hired four additional internal auditors, and it's reviewing financial training for all accounting employees.

The hirings are in addition to changes announced by Gamble. Last month he banned contributions from employers and vendors to charities run by union officers and hired an ethics officer to handle misconduct complaints.

Jones, who stepped down as president last month, was the regional director in St. Louis before taking the union's top spot. He has not been charged, but his home was raided by investigators in August.

His attorney, J. Bruce Maffeo, said that all expenses for regional conferences were reported in detail and never questioned by the UAW accounting department or executive board.